Silver guru David Morgan states the truism that “everything we use in our modern-day lives is either grown or mined.” I think you'll conclude that these two pursuits pretty much define what it takes to both survive and thrive here on Planet Earth.

And like anything else, it helps if during the growing and mining, we pay attention to how we do it – leaving a small footprint, so that future generations can also harvest resources and sustain themselves.

However, unfolding developments in the mining sector are igniting the rocket fuel under precious metals prices. I'm talking about the rising costs and risks of mining, and the supply-price spiral that will result.

The production of precious metals – as well as the base metals copper, lead, and zinc usually found in conjunction with them – presents a certain amount of environmental risk between the time they are dug out of the ground, to when they are sent to industrial applications, or end up in the palm of your hand.

Seldom found near the surface, gold and silver ore must be blasted, dug, and transferred out of narrow passageways, often hundreds, if not thousands of feet below the surface – then processed by one of two primary methods.

Mining Will Always Leave an Environmental and Political Footprint

Transported to a mill, the ore undergoes a crushing. A flotation circuit process separates the majority of the metals-containing deposit from the remaining rock, usually by chemical and aeration operations, yielding concentrate or “con.” This relatively dry, high-value powdery residue is trucked to a smelter and refined into “dore” bars of 60 – 80% purity. Finally, it goes on to specialized locations in order to achieve the .999 fine level associated with the bullion/legal tender coins, bars, and rounds of which you are probably familiar.

Another process – heap leaching – harvests metal from low-grade deposits, which requires the processing of a lot of rock. A ton of ore may need to be crushed to retrieve a fraction of an ounce of gold or a hundred grams of silver! The ore is stacked on lined pads and sprayed with chemicals, to “leach” the metal from the surrounding waste material. The ore for this is obtained either from open pits, or from previously-described underground mines.

The thick liquid tailings left after processing – with various levels of toxicity – are stored in “tailings ponds,” which over time may become solid earth.

In some hilly parts of Mexico with little flat ground, a hardened tailings pond may be covered over with earth and used as a soccer field! But in larger operations, these ponds can take many years – if ever – to fully dry out, since a large operation adds liquid reside day after day, year after year. If the pond walls are not built properly – or even if they are, but have become subject to shifting ground, a flash flood, or some other destabilizing event – they may leak or collapse.

This is what happened recently – once in British Columbia and a short time later in Mexico. In the B.C. case, over 1 billion gallons of treated water with questionable toxic levels, flooded into a nearby lake and surrounding streams. While it will take some time to measure the full effects, the negative impact on the public's perception of mining and the risks it entails was immediate.

Political Backlash Jacks Up Costs of Building and Operating Mines

No matter how carefully a mining operation is conducted, accident risk cannot be removed from the equation. In other words, operational reality can only address threat-management and reduction, not threat elimination.

A mining operation we profiled recently in The Morgan Report (a newsletter to which you may obtain a trial subscription, including a free U.S. Silver Eagle!) builds, leases, and also uses man-portable drilling platforms which create almost no disturbance to the ground cover – i.e. cutting down trees, building roads, digging ditches, etc. When their work is finished, the crews restore the ground used to its natural state. Soap-like lubricants used with the drills are bio-gradable, leaving virtually no toxins behind. 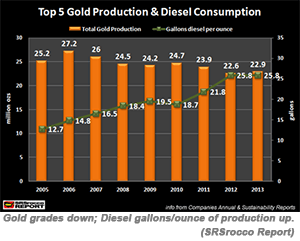 Another company was initially formed as an environmental rehab business. It only later produced silver, from some of the highest grades/ton ore to be found just about anywhere. Their separate company removes and processes large quantities of toxic zinc residue left over from previous decades of silver mining when regulations were much less strict – in some cases nonexistent – compared to what they are today.

Writing in Sprott's Thoughts, Steve Todoruk observes that mining companies, like airlines, cannot give guarantees. Being a realist, he notes:

It's likely that accidents like this will happen again. Despite the risk, the mining industry will continue, because people need metals like copper in order to enjoy access to electricity for their homes and offices, to computers, cars, air conditioners, and other modern comforts.

It's almost assured that mining operations are going to be held to even more stringent operational standards. These requirements will cost more, take longer to implement, and greatly raise the financial bar for exploration companies hoping to find more increasingly-elusive new deposits.

And you can bet your bottom (paper) dollar that all the metals – especially gold and silver, are going to be more costly and harder to come by as mining production costs ratchet ever upward.

Got Gold? Got Silver?