Many precious metals investors are starting to question whether gold and silver are still the best store of wealth in the future. The reason Alternative Media community is starting to have doubts about their gold and silver investments is due to the rapidly rising value of the cryptocurrency market. Also, a number of precious metals analysts have jumped ship and are now only supporting the cryptocurrencies as the next best thing since sliced bread.

While some precious metals analysts now believe that Bitcoin and cryptocurrencies are the better assets to own in the future rather than gold and silver, I do not belong to that group or mindset. I differ from these analysts based upon my energy analysis. Unfortunately, these analysts that promote cryptocurrencies as the “New” digital assets of the future, are ignorant about the Falling EROI – Energy Returned On Investment, or are clueless to the dire energy predicament the world is facing.

I’ve received many emails from followers who wanted to know my opinion on the matter of “Precious Metals vs. Cryptos.” So, I thought it would be a good idea to discuss the fundamental reason why I believe the precious metals are still the KEY ASSETS to own in the future.

While the gold price has increased significantly since 2000, Bitcoin’s price has gone up exponential in a short period. The amount of gold that can be now purchased with one Bitcoin has increased dramatically from less than a half ounce at the beginning of 2017, to 3.4 oz currently: 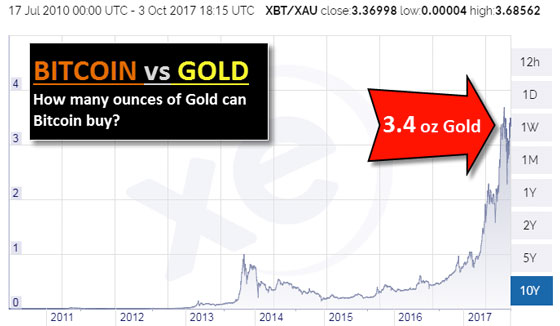 Normally, exponential price rises do not last. However, Bitcoin might be the one asset that is an exception to the rule….. FOR A WHILE. Many cryptocurrency analysts are forecasting a $10,000+ price by early 2018. I have no idea if Bitcoin will reach $10,000 next year, but I am more concerned about what happens in the next 5-1o years. Even though the Bitcoin price might shoot higher, it could also correct much lower and trade flat for several years as it did after its spike in 2013. 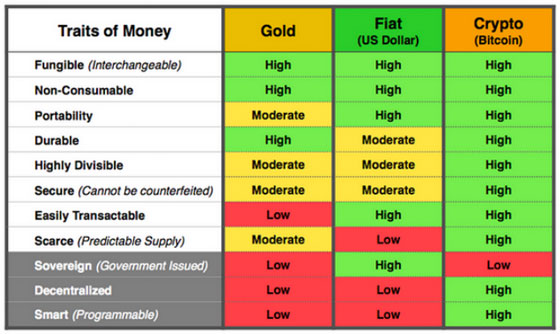 On the other hand, gold, the king monetary metal, suffers the lowest overall score in the group. The reason gold has a lower rating that fiat currency or Bitcoin is due to advanced technology. It’s much easier to buy groceries with $20 Federal Reserve Notes than using gold or silver coins. Furthermore, the supply of Bitcoin is more scarce than either gold or fiat currency (especially fiat currency as it has been printed into oblivion).

While the table shows fiat currency and Bitcoin enjoy higher traits of money than gold, some factors in the graph above are misrepresented. Let me explain. First, the table shows that Bitcoin is highly durable. This is true only if the electric grid and internet remain in a highly functional state. Just look what happened to Puerto Rico after Hurricane Maria hit the island. An astonishing 95% of the island is still without power…. and it will take months to restore power to the island. How does Bitcoin or electronic money function in Puerto Rico today?

Even though Cash is king in Puerto Rico today, what would have happened if the U.S. Dollar went into hyperinflation at the very same time that Puerto Rico lost its power? Instead of using cash, people would be bartering and using gold and silver for trade.

Second, the “predictable supply” category gives Bitcoin a “high” ranking while gold receives a “moderate” rating. Bitcoin can only accomplish a predictable supply if the electric grid, internet, and energy supply continue to provide the power for bitcoin mining and transactions. For Bitcoin to continue mining and providing transactions in the future, the world needs a cheap and growing energy supply. Unfortunately, a cheap and increasing power supply is not in the cards.

The situation will only get worse going forward. Thus, advanced technology will come under a great deal of stress as energy production starts to decline. The problem with the money traits shown in the gold-fiat-bitcoin table above is that the ratings are based upon a highly advanced technical system that is assumed will continue for the next 2-3 decades. I disagree.

Gold and silver have been stores of “Economic Energy” (coin termed by Mike Maloney) for thousands of years. They will continue to provide this function even as energy production and advanced technology suffer in the future.

Gold Still The Key “Safe-Haven” Asset To Own

While Bitcoin and the cryptocurrency market cap has increased over the past year, it is still 20 times less than total global gold investment: 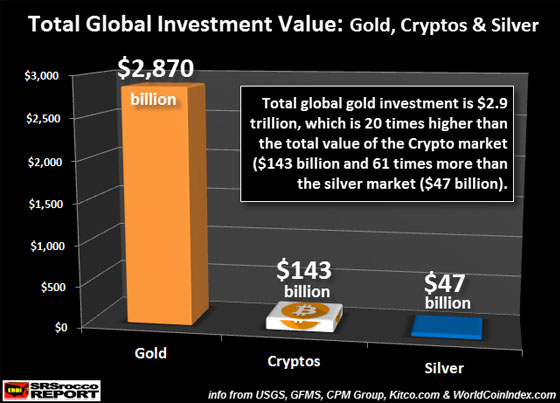 Yes, it’s true that the cryptocurrency market may still experience a huge increase in its total market cap to $1 trillion or more. However, the crypto market cap could also suffer a massive collapse in value, especially as the world’s energy situation disintegrates.

We must remember, physical gold and silver will still provide a store of “economic energy” in a post-industrialized world, as it has for thousands of years. Again, I will discuss this in more detail in future articles.

Lastly, the U.S. Stock Market continues to increase even as a barrage of negative news hits the press. James Kunstler wrote about his in his article, Kunstler: "Nothing Can Faze This Mad Bull, Apparently…":

Nothing can faze this mad bull, apparently. Except maybe the $90 trillion combined derivatives books of CitiBank, JP Morgan, and Goldman Sachs, who have gone back whole hog into manufacturing the same kind of hallucinatory collateralized debt obligations (giant sacks of non-performing loans) that gave Wall Street a heart attack in the fall of 2008.

Europe’s quaint doings must seem dull compared to the suicidal potlatch of life in the USA, but, believe me, it’s a big deal when the Spanish authorities start cracking the heads of Catalonian grandmothers for nothing more than casting a ballot.

Evidence of the Mad Bull Market is shown in the following chart: 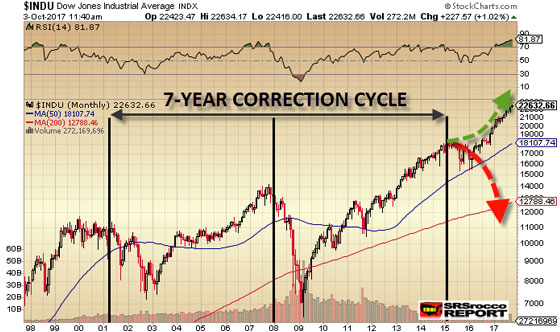 The Dow Jones Index continues to move higher, disregarding any bad news in the press. After the horrific mass shooting in Las Vegas, the Dow Jones added another 130 points on Monday. Today, it is up another 76 points to a record 22,633.

As we can see in the chart above, the normal correction phase takes place about every seven years. If a healthy correction took place, the Dow Jones would be at least 10,000 points less than what is its today. However, if the Dow Jones Index suffered just a 20% correction, it would gut the U.S. Retirement Market and Pension system. If the U.S. Pension System isn’t in enough trouble already, a 20% decline in the Dow Jones Index would most certainly push it over the edge.

The Dow Jones Index and other assorted Ponzi stock markets will likely continue higher as that is the only way they can go. Unfortunately, stock market valuations are now reaching insane levels as Americans suffer from increased BRAIN DAMAGE or over-prescribed FRONTAL LOBOTOMIES.