Palladium and Rhodium on Fire, Is Platinum Next?

Platinum was once the most precious of metals. For decades, it traded at a premium to gold. The other platinum group metals – palladium and rhodium – barely registered on investors’ radar screens.

Platinum lost its crown to gold in 2015. It was overtaken by the other PGM metals in recent weeks.

Given that platinum, palladium, and rhodium demand is largely driven by automobile manufacturing and the production of catalytic converters, one of these things is likely true; platinum is currently undervalued, or the other two have gotten ahead of themselves. 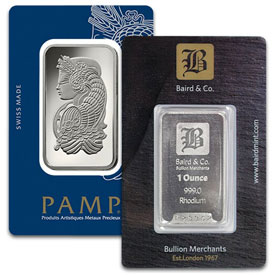 Which one is the correct assessment will depend on whether the current optimism for economic growth in both developed economies and emerging markets has been well placed. Either way, investors inclined to speculate on the PGM metals have some interesting market action upon which to trade.

Platinum does look remarkably underappreciated. It is hard to imagine it trading at a significant discount for too long.

Auto makers should bid for whichever metal offers the lowest cost as all three are somewhat interchangeable.

Platinum offers the largest and most liquid market of the group. It is widely available in a variety of coins and bars. For investors, platinum’s liquidity is a consideration.

Although rhodium has doubled in the past year, it currently trades just over $1,300.

The metal’s pattern of having a sharp spike roughly once every 10 years is interesting. It is possible we are in the middle of another of those massive moves now. 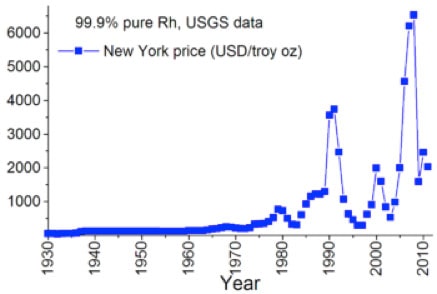 Rhodium is available primarily in 1 ounce bars. While the quantity of rhodium traded is by far the lowest among precious metals, market liquidity for that metal has seen a boost since 2008. There are now a couple of ETFs focused on the metal. Those ETFs may in fact be driving a good portion of the recent demand.