As the Dow Jones Index hits another all-time high today, smart money is rushing to the exits. You see, smart money knows when something is too good to be true. Unfortunately for the retail investor who is suffering from acute BRAIN DAMAGE, they are doing quite the opposite. As institutions sellout on each new market price rise, retail investors are happily buying… hand over fist.

And why shouldn’t they? These are good times. Well, maybe not for Americans living in Houston, parts of Florida, California or in Puerto Rico. Whatever happened to the news on the massive flooding and hurricane damage in Houston, Florida and Puerto Rico? I remember seeing videos of Miami Beach High-Rise Condos with seawater 5-8 feet surrounding the entire area. Does anyone have an idea of what happens to electrical systems when salt water floods buildings? It’s not good.

Regardless… the amount of destruction major U.S. cities have experienced in the past three months is like nothing we have witnessed before. Regrettably, a lot of these homes and businesses will never be rebuilt. Not only don’t we have the money to do it, more importantly, we also don’t have the available energy. While the massive destruction by hurricanes, flooding and fire have not impacted the stock market currently, they will.

As I mentioned at the beginning of the article, retail investors are propping up the markets. However, they aren’t the only ones, or should I say, the only factor in keeping the markets from falling off a cliff. Thanks to Uncle Sam, total U.S. debt has increased by $590 billion in just the past month and a half. Here is a table of U.S. debt from the data published by the fine folks at TreasuryDirect.gov:

The U.S. debt ceiling was finally breached on Sept 8th as the Treasury added another $318 billion of debt in one day. Since that day, the U.S. debt has increased by another $271 billion. The addition of debt to the U.S. Government balance sheet had a wonderful impact on the stock market: 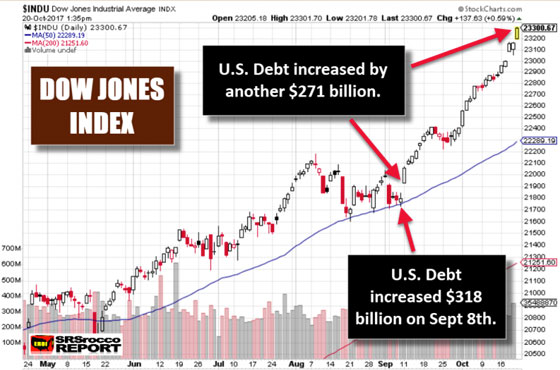 You will notice that the Dow Jones Index was running along the 50 Month Moving Average (BLUE line). Any breach below a crucial technical support line could force selling by traders. But, when the U.S. Treasury added another $318 billion of debt on Sept 8th, this propelled the markets higher. While I don’t pay much attention to technical analysis, many professional traders most certainly do.

And… as the U.S. Treasury added another $271 billion in debt, the markets continued even higher. So, what we have propping up the markets are DEBT and BRAIN-DEAD RETAIL investors. This is not a good sign. While the markets will likely continue higher, it will only give institutional investors more opportunity to sell out: 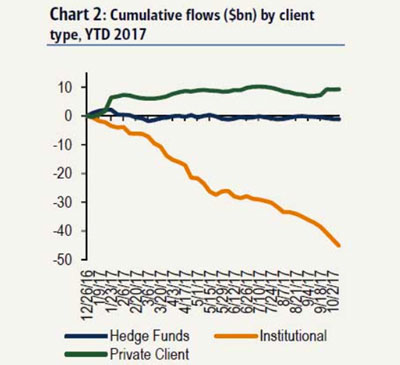 The ORANGE line represents SMART MONEY, the institutional investors. Here we can see what a proper investment strategy should be during a rising bubble market when one doesn’t suffer from the same illness as the retail investor. Furthermore, the savvy institutional investor is also able to understand the ramifications of the following chart: 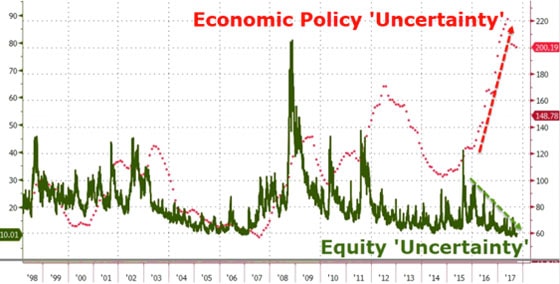 The two lines in the graph have diverged considerably since the beginning of 2016. The Economic Policy Uncertainty line represents the amount of negative news in the MainStream Media on the markets, governments, etc,… while the Equity Uncertainty line shows the volatility in the stock market. Typically, these two lines parallel each other. But, as we can see, they have gone in opposite directions.

Thus, an investor not suffering from BRAIN DAMAGE, (institutional investor), would take this chart as BIG WARNING, whereas the retail investor just wants to know is how quickly he can liquidate his life insurance policy to place an even larger bet in the STOCK MARKET CASINO.

There is no telling how long the stock market will continue to rise as underlying fundamentals deteriorate. However, all markets held up by debt and stupid money, must crash at some point. Frustrated precious metals investors need to keep their distance from BRAIN DAMAGED investors as the disease is highly contagious.

My advice…. buy the GOLD & SILVER CHIPS and leave the CASINO while you can.