One Belt, One Road, One Direction for Precious Metals

All great events hang by a hair. The man of ability takes advantage of everything and neglects nothing that can give him a chance of success; whilst the less able man sometimes loses everything by neglecting a single one of those chances. 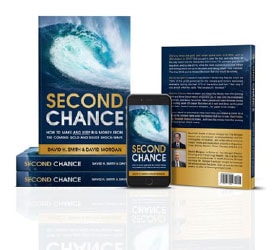 China's launch several years ago of the One Belt, One Road Initiative is set to become the biggest commercial linking-system constructing project in world history. In the book David Morgan and I co-authored, Second Chance: How to Make and Keep Big Money from the Coming Gold and Silver Shock-Wave, we discuss the "New Silk Road" this way:

...the plan, described as an “economic partnership map with multiple rings interconnected with one another” envisions an economic land belt and a maritime road linking Beijing through Europe to the Mediterranean. This modern equivalent of the old Silk Road would weave together the economies of over half the world’s population via transit corridors of highways, high-speed rail, fiber-optic cables, pipelines, and air and seaport hubs.

OBOR - also known as the Belt and Road Initiative – is drawing supplies of commodities to it across the board, like iron filings to a magnet. Concrete, iron, zinc, copper... silver and gold. Silver, as a critical ingredient in the electronics and communication build-out; gold (+ silver) because of rising incomes for China's middle class – larger than the population of the U.S. – which will continue the historical habit adding to its precious metal holdings.

An excellent interactive map showing the primary pathways and effects of this mammoth construction project can be found at the South China Morning Post. Elements:

The meaning for gold and silver?

When most Western analysts tout the virtues of precious metals' ownership, they focus on what Frank Holmes refers to as the "Fear Trade." They say you should (and we agree) own gold and silver as "insurance" against rising inflation, which by the year (daily in Venezuela and Zimbabwe) reduces the purchasing power of David Morgan's famously termed "paper promises." These highly-liquid metals can be turned into fiat paper virtually anywhere in the world. 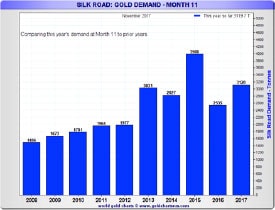 Holmes also refers to the "Love Trade", a demand factor just as important and enduring. When people's disposable income rises, they purchase discretionary items - things not otherwise critical beyond the basics of food and shelter. This behavior, especially by Indians and Chinese ("Chindians") has historically been a habit; almost an obsession. Graceland Updates Editor, Stewart Thomson describes the OBOR context, saying:

Gold is headed back towards slow, relentless appreciation against fiat, but it won't be as slow as you might think... because of the exponential mathematical relationship between Indian wage increases and gold demand. The road to $15,000 will be built with one belt, one road, one price-advance brick at a time.

As citizens industrialize, they play catch up with everyone else. Because there are almost 8 times more Chindians than Americans, it's a super-sized version of what took place in the 1880s in America. (Given) that the Chinese are the world's biggest gamblers, and Indians are maniacally obsessed with owning all the gold there ever was, is, and will be, the bull era promises to be incredibly exciting.

One of most overlooked tools in a technical traders trading box is the relationship between gold and global currencies. On major exchanges it's most frequently quoted in U.S. dollars, but in a given country, gold demand is expressed in local money. When we see gold advancing in dollars, that's important. When making new highs in other currencies, it becomes a bell-weather signal in its own right. 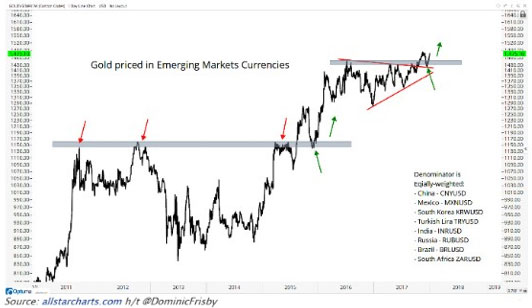 The blockchain-gold-silver nexus - another element to the equation.

Over the last year, I have written in this space – as well as in 2018 issues of The Prospector News and The Morgan Report – how the blockchain revolution will affect precious metals' demand and ownership. Kevin Vecmanis, in an essay titled "Gold and Blockchain", ties these golden threads together, commenting:

...Gold has found itself in the blind spot of investors almost seven years after making a nominal all-time high. Quietly, beneath everyone’s nose, gold is undergoing a tectonic shift. On every time frame – weekly, monthly, quarterly, and yearly - the trend in gold has shifted upwards. Gold smashed historical quarterly volumes the last two quarters in a row by a significant margin.

While western investors are enamored with the stock markets, there are two billion people in the east that view gold differently and are gladly taking it off our hands at lower prices. Their economic influence is rising. Their economies are in desperate need of transactional efficiencies that the blockchain offers. A rising standard of living in the east directly equates to a rising base demand level for gold.

This year right out of the box, precious and base metals, as well as shares of the better miners who produce them have been strong, a trend set to continue. Information Risk is being replaced by Price Risk.

Don't become a Lookie Lou who wonders later this year why you didn't act while metals were "affordable" and available. Don't become "the man (or woman) of ability" Napoleon describes, who misses "a chance of success" by neglecting to act on the bullish metals' signals Mr. Market is sending your way.