During the last 90 minutes of trading on Wednesday, the Dow Jones Index tanked by 400 points. Supposedly, the steep selloff had something to do with the release of the Fed minutes. However, today, the market has reversed once again and is up by 200 points. Unfortunately for mainstream investors, it doesn’t matter what the Fed or Wall Street have to say; the broader markets will continue to fall precipitously over the next few years.

I also discuss the tremendous increase in U.S. public debt over the past five months. The U.S. Government is increasing debt at the fastest rate ever. One of the negative side-effects of adding a great deal more debt to the public’s balance sheet is that the U.S. Treasury has to pay an ever-increasing amount of interest to service that debt.

After the Dow Jones Index fell 3,500 points in a short period, investors came back in to BUY THE DIP. This “buy the dip” mantra is being played up by Wall Street and other assorted analyst gadflies. While I don’t give out investment advice, if I were in the market, I would be SELLING THE RALLIES, not buying the dips.

Even though the Dow could move higher, and even surpass its previous high of 26,600, the leverage is still too extreme to allow the index to move up considerably from here. In the video, I show how the Dow Jones Index had three peaks and declines before it sold off in 2008. Thus, the index did not fall in a straight line, and it took nearly a year from the peak before the crash took place: 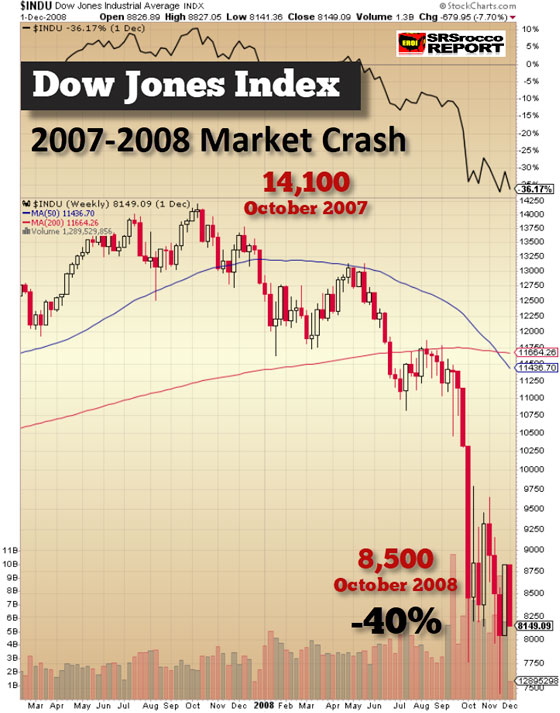 Lastly, there seems to be a group of analysts and followers of my work who are unable to understand CRITICAL THOUGHT and LONG-TERM FUNDAMENTAL ANALYSIS. For example, due to the rapid increase in U.S. Shale Oil Production, we see analysis and comments on the internet suggesting that peak oil is dead and that those who adhere to fundamentals of resource depletion on a finite planet are just plain wrong.

While I won’t get into details here on why I disagree, the situation in the U.S. Shale Oil Industry is much worse shape than the market realizes. These shale oil companies have put out presentations and financial reports that are misleading investors, so they continue to receive funds to keep the biggest energy Ponzi Scheme in history. If the market thought ENRON was the biggest energy Ponzi scheme in history, they haven’t seen anything yet.

The only reason the U.S. Shale Oil Industry was allowed to continue producing uneconomic oil for the past decade is that it used OPSM – OTHER POOR SLOBS MONEY. Unfortunately, analysts and individuals who have been hoodwinked by the supposed “technological advances” in lowering the cost of shale oil production and notion that it will continue for decades have done so because of their failure of CRITICAL THOUGHT.

If an individual continues to believe in infinite growth on a finite planet, there is no use debating this person because the wiring in the HEAD has malfunctioned.

Pay attention carefully to what happens to the U.S. Shale Oil Industry over the next several years, and when the cow excrement finally hits the fan, the financial and economic situation for the United States will likely deteriorate rapidly.