Silver mine supply from the world’s fourth-largest silver producer fell significantly at the beginning of 2018. According to Chile’s Ministry of Mines, domestic silver production in January declined 20% versus the same month last year. Chile’s silver production has been falling considerably since its recent peak in 2014.

In just three years, Chile’s domestic silver mine supply fell 10 million oz (Moz) from 50.1 Moz in 2014 to 40.4 Moz last year. Interestingly, Chile’s silver production is down 20% since 2014 while the country’s copper mine supply is only down 5%. Because most of Chile’s silver supply comes as a by-product of copper mining, it’s surprising to see such a significant decline in their silver production.

If we look at three of the top four silver producers in the world, Mexico’s silver mine supply in January increased 7% while Peru declined 6%: 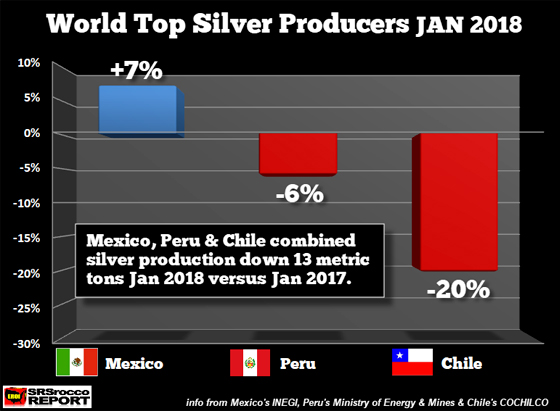 According to the official data, Mexico’ silver production increased 29 metric tons (mt), Peru fell 20 mt and Chile dropped by nearly 21 mt. Thus, overall silver mine supply from these top three producers fell 13 mt in January versus the same month last year. Even though Mexico will likely experience an increase in silver mine supply in 2018, declining production from other leading countries may curtail overall world supply.

If we look at total silver production from these three countries, the peak took place in 2015 at 373 million oz: 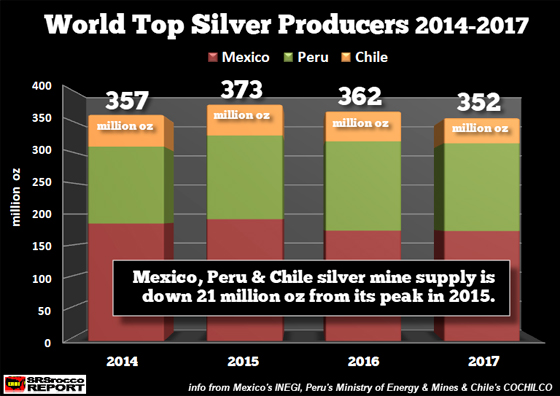 In just two years, the combined silver output from Mexico, Peru, and Chile is down 21 Moz. Now, what’s even more interesting is the growing disparity in production figures released by the official governments and those collected by Thomson Reuters GFMS and published in the World Silver Surveys.

For example, the official government sources report that the combined silver production in 2016 from Mexico, Peru, and Chile was 362.3 Moz versus 378 Moz published in the World Silver Survey: 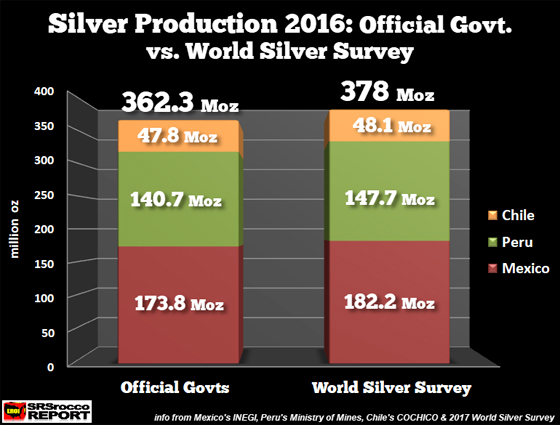 Lastly, even though we may see an increase in silver production from Mexico, overall global mine supply will likely start to decline more rapidly over the next several years. Why? A stock market meltdown will destroy demand for base metals and the silver supply as a by-product of copper, lead and zinc production.

A falling mine supply of silver when investors around the world wake up to the tremendous STORE OF WEALTH properties of the poor man’s gold should do wonders for its value in the future.