Investor Alert: How to See Through the Fog of War

The U.S. fired 105 Tomahawk missiles into Syria on Friday night.

In other times, the salvo would have put Americans on edge over the prospect of war with nuclear-armed Russia. Our former Cold War adversary is actively defending the Syrian regime and warning the U.S. to mind its own affairs. 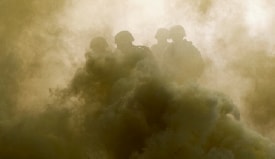 But, these days not much can command the attention of the complacent public.

The President quickly declared “mission accomplished” and markets may begin discounting the likelihood of further conflict.

After decades of warfare in the Middle East, the launch of several dozen Tomahawk missiles in the general direction of Russian forces in Syria does raise the stakes. It’s the second time President Trump has authorized missile strikes there in the past year, almost no one remembers the missile attack in April of 2017 at all.

Americans spent a few years on high alert following the 2008 financial crisis. They were lulled back to sleep when the Fed and their allies on Wall Street reassumed total control of the markets.

The root causes of the crisis have never been addressed. They are metastasizing instead. Public debt levels have tripled. Private debt has also grown significantly. All the while, bankers continue rigging markets and pervasive fraud goes largely unpunished.

Our unceasing military intervention overseas alienates some allies and breeds new enemies, some of whom are more than capable of fighting back. Another crisis, whether it is military or economic (or both) is inevitable. The causes, like before, will be obvious but not until after the fact for most.

On the whole, Americans are tuned out. They will be caught by surprise once again.

The half life of major events in the news has grown shorter and shorter in recent years. The corporate media must prefer it that way. There weren’t many journalists investigating why Syrian President Assad would wait for Trump to announce the U.S. withdrawal and then use chemical weapons to provoke a U.S. attack.

Years of faulty intelligence and deception from Deep State forces haven’t undermined the mainstream media’s confidence in the official story. Reporters seem tasked with selling the story rather than questioning it. But Chinese officials declared yesterday "the arrogant U.S. has a record of launching wars on deceptive grounds."

Nevertheless, here at home the attack on Syria may already be sliding down the memory hole. The illusion of stable markets is one day going to fall apart, broken by some black swan event.

Until then, expect more of the bizarre -- such as stocks and commodities both surging higher along with the threat of war.

A major upside breakout in gold came close to fruition last week. Close but not quite. Gold bugs will need to keep waiting for a decisive move above the $1,350 - $1,400/oz resistance zone.