Turkish gold imports surged due to a sharp increase in investment demand as well as renewed Central bank purchases. While the Chinese and Russian governments have been adding gold to their official reserves over the past several years, Turkey added 86 metric tons to its official holdings in the last seven months of 2017.

According to the 2018 World Gold Survey, Turkish official gold holdings reached a new record high of 565 metric tons (mt) last year as the government decided to replace a significant amount of its Dollar reserves with gold. And, this continued even in the first quarter of 2018. Information from the World Gold Council’s Demand Trend reported that Turkey added another 30 mt of gold to its official reserves in Q1 2018.

If we look at the chart below, we can see just how much gold Turkey imported in 2017 versus 2016: 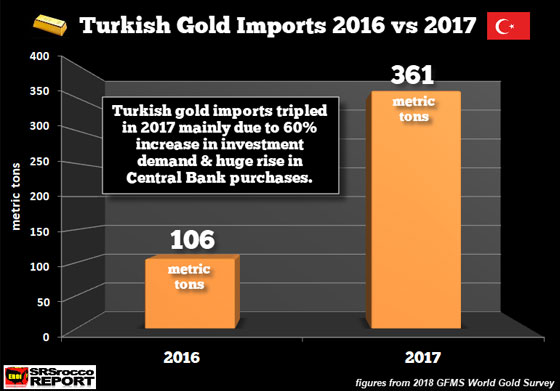 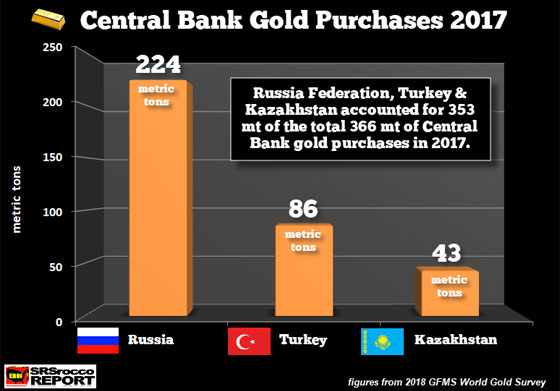 What is quite interesting about the increase in Turkish gold demand and imports is how it compares to the United States. In 2017, Turkey imported 361 mt of gold versus 255 mt for the United States. Thus, Turkey, whose population is one-quarter of the United States, imported 100+ mt more gold. Of course, most of the U.S. gold imports are refined and then exported to Switzerland, United Kingdom, China and various other Asian and Middle Eastern countries.

Furthermore, as U.S. gold investment plunged by 55% in 2017, Turkish demand for gold bullion surged by 60%, mainly due to an increase in official coin purchases. According to the 2018 World Gold Survey, Turkish official coin sales jumped to 38 mt versus 22 mt in 2016. Thus, the Turkish population consumed more than three times the 13 mt of U.S. official gold coin sales last year.

Now, if we look a the major foreign holders of U.S. Treasury securities, Turkey has been liquidating its Dollar holdings by $16 billion since its peak in October 2017: 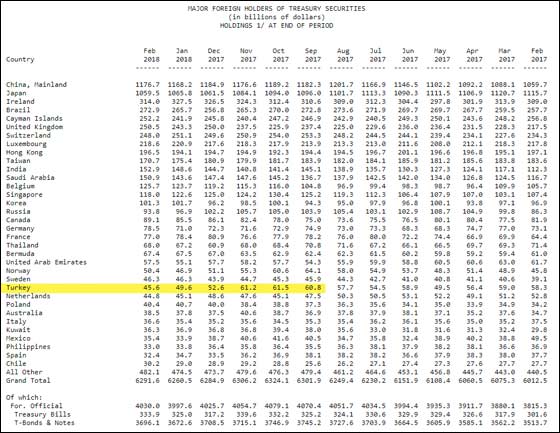 While there are countless reasons why Russia is adding gold to its official holdings, the most important reason is quite simply, because IT CAN. The majority of countries are running massive trade and balance account deficits and cannot purchase gold. Russia is one of the few countries that export a great deal more oil than it uses domestically which is part of the reason it enjoyed a $115 billion trade surplus last year (Source: Russia: Trade Balance – Statista)

Lastly, gold is a barometer for the U.S. Dollar. If the U.S. Government started printing money to buy gold, just think about how that would not only impact the price but market sentiment. Western central banks will continue to liquidate gold until the financial markets and the fiat monetary system disintegrate.

When we start to see more countries like Turkey adding to their gold reserves, it’s a clear sign that all is not well in the global financial markets.