Warren Buffett’s famed annual letter to Berkshire Hathaway shareholders landed in the mail last week. Buffett has built a vast fortune investing in the shares of publicly traded companies. He has long been critical of gold. His most recent letter takes another swipe at the precious metal and implores readers to buy stocks instead.

Before his fans start dumping gold and calling their stock brokers, we thought it would be worth examining Buffett’s argument.

He compares that to making a different choice and buying gold:

To “protect” yourself, you might have eschewed stocks and opted instead to buy 3 1⁄4 ounces of gold with your $114.75.

And what would that supposed protection have delivered? You would now have an asset worth about $4,200, less than 1% of what would have been realized from a simple unmanaged investment in American business.

It sure looks like a no-brainer. Only suckers would buy gold when they can buy stocks instead, right?

The comparison leaves out some critical facts. For starters, there was no such thing as an S&P 500 index fund in 1942. The notion of investors buying a “no-fee” variety of an asset type that didn’t exist is even more unfair.

The S&P 500 index as we know it began in 1957 and the first index fund representing a basket of those shares launched in 1976. Prior to that, investors would have been forced to pick stocks and take even more risk. 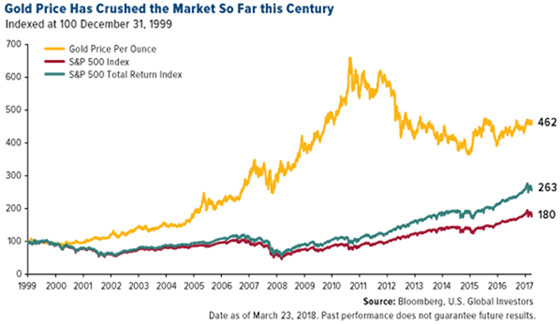 Most would not have had the fortitude and discipline to manage a portfolio of stocks and get the sort of returns Buffett is implying. Of the 500 companies initially included in the 1957 index, only 60 remain. Plenty of those firms failed, and their share prices went to $0.

Shares of any stock can become worthless while physical gold cannot. Buffett neatly sidesteps the concept of risk with his comparison.

Buffett also fails to mention the gold price was tightly controlled for the first 30 years of his comparison period. While shares of public companies were free to appreciate as America clawed its way out of Depression and war in what was perhaps the greatest economic boom of all time, gold was officially suppressed. The U.S. government fixed the price at $35/oz and then $42/oz from 1934 to 1971.

In truth, Buffet could not have bought gold in 1942 had he wanted to do so. Franklin Roosevelt had long since outlawed private ownership of gold via Executive Order 6102.

Most importantly, Buffett may think of gold purely as an investment asset, but he is sadly mistaken. 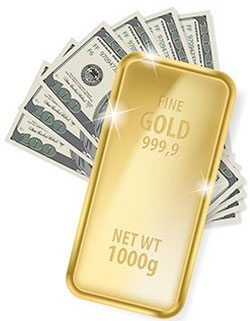 Gold is a far more reliable
form of money.

Gold is money, and it continues to be treated that way by governments and central banks around the world. It has very different properties than shares in a company, and the reasons to own it are different.

It would be fairer for Buffett to compare putting $114.75 into a bank savings account versus buying gold in 1942. But that would make gold look very compelling indeed as a sounder form of money.

Gold has also proven to be a sounder investment than stocks throughout some entire decades. Gold outperformed the S&P 500 by multiples during the 1970s and did so again from 2000 (as the chart above reveals).

Perhaps the biggest blind-spot in Buffett's analysis is the same one that plagues mainstream investors everywhere. Buffett is a victim of normalcy bias. He expects the next 77-year period will be similar to the last. But it almost certainly won’t.

Buffet should broaden his view to include events which are far more likely than another eight decades of nearly uninterrupted prosperity and growth. One of which is hyperinflation as the U.S. dollar follows the well-trodden route of other fiat currencies into destruction.

The last eight decades were built upon an Everest-sized mountain of borrowed money, much of which has propelled Wall Street and the equity markets to heights they could not have reached otherwise. Buffett should not be expecting that to repeat. Swapping some of his shares for physical metal might well prove to be a prudent move.