Could a Lurch Toward Socialism Sink Democrats in 2020?

Rahm Emanuel, the former Chief of Staff for President Barack Obama and now Mayor of Chicago, is worried about socialism. Of course, he’s a proponent of redistribution and collectivist initiatives such as socialized medicine. He just thinks it’s bad politics.

He believes too many Americans aren’t yet keen on overt socialists running for office.

According to Emanuel, Democratic candidates and operatives should distance themselves from using the word “socialism” and find other ways to describe their agenda.

If they don’t, they may lose in 2020. He thinks President Donald Trump is vulnerable, but not if Trump and other Republicans can pin the socialist label on Democrats and use the candidates’ own rhetoric to do it.

Emanuel drafted a March 10th editorial in The Atlantic outlining the danger for Democrats. He writes:

Earth to Democrats: Republicans are telling you something when they gleefully schedule votes on proposals like the Green New Deal, Medicare for all, and a 70 percent marginal tax rate. When they’re more eager to vote on the Democratic agenda than we are, we should take a step back and ask ourselves whether we’re inadvertently letting the political battle play out on their turf rather than our own.

If Trump’s only hope for winning a second term turns on his ability to paint us as socialists, we shouldn’t play to type.

Emanuel knows a direct assault on America’s pro-freedom values being waged by many of his party’s rising stars is no way to win an election.

But he takes care to ensure the ideologues in his party don’t misunderstand him. He isn’t criticizing their values:

That’s not to say Democrats should abandon our priorities. We should work hard to combat climate change. We should fight to expand health-care coverage and reduce costs. We should find ways to make the tax code more progressive.

Emanuel thinks Democratic luminaries, such as Alexandria Ocasio-Cortez, really need to be more careful about what they say out loud, in public. Otherwise their political adversaries will find it child’s play to link their ideas to all of the other times and places they have been tried and failed. 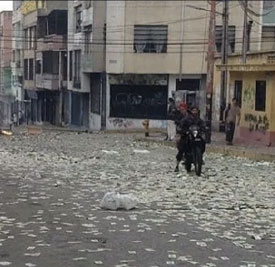 The streets of Venezuela are littered
with worthless paper money.

President Donald Trump is eager to help Americans make the connection between an Ocasio-Cortez and other avowed socialists – such as Nicolas Maduro in Venezuela.

Maduro and Ocasio-Cortez have a lot in common when it comes to theory and governance.

Rahm Emanuel sees disaster if Cortez and other Democratic stars keep it up, declaring themselves as socialists and openly advocating for things like 70% tax rates and printing money to fund their grand vision for America.

Don’t they know what is happening in Venezuela is not a good model?

Again, it isn’t an actual disaster, like the one depicted above, that apparently bothers Emanuel. He isn’t worried about dollars swirling through the streets as America descends into Third World style poverty. Emanuel is simply terrified of another disaster at the polls.

The political establishment has a problem though. A growing number of Americans from the left, right, and center have had their fill of clever politicians mouthing whatever it takes to be elected.

Americans are looking for candidates that stand for something. Ocasio-Cortez is a rising political star because she rejected the establishment and convinced voters she is genuine.

Ocasio-Cortez, Elizabeth Warren, and Bernie Sanders proudly champion socialism over capitalism. Their political stock has been rising, despite embracing a philosophy that would have ended most political careers just a decade or two ago.

They are likely to continue campaigning to the hard left, even if old guard Democrats like Emanuel plead for members of his party to soft-pedal their support of socialist policies.