Telling obvious lies with a straight face is part of Powell’s job description. He hopes to maintain order even though anyone who is paying attention knows something extraordinary is going on. 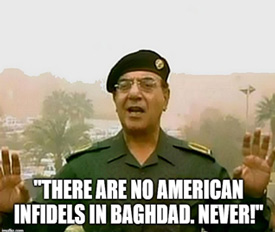 When the Fed stepped into the “repo” markets at the end of September with hundreds of billions in short term loans for its owner banks, Powell stood out front telling everyone there is nothing to worry about.

The Fed’s repo market lending was initially sold as a very temporary measure to combat a quarter-end cash crunch in an otherwise healthy financial system.

Now it has morphed into a months-long effort which may ultimately involve trillions of dollars.

Powell hasn’t bothered to explain why there has been such a massive expansion of this program or apologize for the gross mischaracterization of the repo market activities when they originally began.

All we know for sure is that the Fed is acting as the lender of last resort in a market where banks are no longer willing or able to lend to one another at less-than-punitive rates. Fed officials are now committed to playing that role through January, at least.

Maybe they don’t fully understand what the troubles in the repo market portend. It is more likely they are whitewashing some emergency.

Perhaps the repo market operations are a backdoor bailout for one or more major banks. Whatever is happening, it can’t be good.

Fortunately for Powell the media isn’t asking many questions. And the Fed remains wholly unaccountable. No one there can be forced to explain what is actually going on.

Alert citizens can spot the lies and obfuscation. But, it’s hard to know exactly how bad things are. Eventually some crisis could overwhelm all of the official efforts to manage the story, and the truth will be out.

The Fed may be working to fend off just such a crisis now.

Last week, central bankers announced a program to buy $60 billion worth of Treasury bills each month. This effort will be in addition to the hundreds of billions being pumped into the repo markets.

“Baghdad Jerome” says this program should definitely not be considered QE. 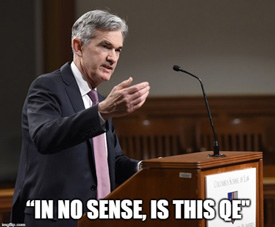 He told reporters it "should in no way be confused with the large-scale asset purchase programs that we deployed after the financial crisis.”

We understand why Powell is so anxious to avoid the label of “QE.” It would be awkward answering questions about why prior rounds of the program failed to promote lasting economic recovery, or why more of the same should work this time.

Also, central bankers desperately want to promote the idea that they have a large and varied set of tools they can use to perfectly plan the economy.

The truth, which must be hidden, is that there is really only one tool -- the variable-speed printing press. And it only works to make bankers richer and ensure government spending is unrestrained.

Quantitative Easing was itself just a clever and technical sounding label officials cooked up to obscure that program’s base nature. Powell can call the new program whatever he likes, but it has an awful lot in common with prior initiatives.

Perhaps the biggest takeaway from these events is that Fed stimulus is a one-way train.

Anyone who bought the official promise that central bankers would withdraw stimulus as markets recovered should abandon that notion, now and forever. They tried. They failed.

Stimulus is better understood as an addictive drug. The Fed can never withdraw it without crippling or killing the markets. Plus, there is always the risk of an overdose.

Take a look at this chart and guess how long will it take to undo all of the ‘Quantitative Tightening” done since 2018? 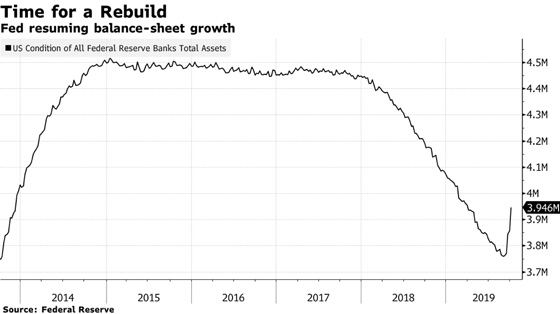 The operations needed to keep the wheels on the cart are getting more extreme. We will find out whether the increasingly flimsy assurances from Powell and other officials are enough to maintain order in the markets.