Has the Fed Let the Inflation Genie Out of the Bottle?

The dramatic ascent of precious metals markets this summer reflects what could be just the start of a longer-term decline and fall in the Federal Reserve Note's value and status.

With gold prices surpassing $2,000/oz recently, the monetary metal has now made new all-time highs versus all the world’s major fiat currencies. Gold is, as former Federal Reserve chairman Alan Greenspan has acknowledged, the “ultimate money.”

The Fed, by contrast, is the ultimate inflator.

Fed officials won’t tolerate deflation (an increase in the purchasing power of the currency) – or even “no-flation” (in the form of a stable-value Federal Reserve Note).

In defiance of their statutory mandate to pursue “price stability,” Fed officials are waging a deliberate campaign to generate higher rates of price inflation.

According to a CNBC report, “In the next few months, the Federal Reserve will be solidifying a policy outline that would commit it to low rates for years as it pursues an agenda of higher inflation… in which inflation above the central bank’s usual 2% target would be tolerated and even desired.”

Meanwhile, the Fed continues to suppress interest rates across the yield curve. On Tuesday, the yield on the 10-year Treasury note fell to a record-low 0.52%.

A falling dollar (the U.S. Dollar Index in July suffered its biggest one-month decline since 2010) coupled with spiking precious metals prices and rising inflation expectations would normally send investors fleeing from bonds, forcing their yields up.

But these are not normal times.

It appears that “yield curve control” policy is already being implemented behind the scenes as part of the Fed’s bond buying operations.

The Fed is now the largest single institutional holder of U.S. Treasuries. Through the powers of self-dealing and an unlimited printing press, the Fed can manipulate the bond market like a puppeteer.

For how long can the central planners artificially sustain a bull market in bonds that is becoming increasingly divorced from market realities? At some point, interest rates will hit a final bottom.

Conventional wisdom used to be that 0% was the absolute floor. But in recent years, we’ve seen trillions of dollars’ worth of European cash and debt instruments carry negative yields.

There need not necessarily be any “zero lower bound” on rates on any part of the yield curve. However, even if U.S. rates never turn negative in nominal terms, they can go deeply negative in real terms – with no lower bound.

“There is nothing more bullish for gold and silver prices than steeply negative real interest rates.”

To illustrate, if benchmark bond yields hover around 0.5%, that nominally positive yield is actually negative (-1.5%) assuming a 2% inflation rate.

And by the way, there is nothing more bullish for gold and silver prices than steeply negative real interest rates on fiat currencies.

Maintaining negative real interest rates – as opposed to negative nominal rates – is the path the Fed is on… not the path Europe took.

Negative nominal rates sent the signal that an economic freeze was in place, so people continued to hunker down financially.

But pushing inflation rates higher gives the illusion of growth.

Though the real economy may be shrinking in the aftermath of coronavirus lockdowns, a stock market pumped up by Fed liquidity injections does stimulate paper wealth creation. In theory, that paper wealth might trickle down into actual consumer demand and job creation.

In reality, the Fed is transferring wealth to Wall Street and pain to Main Street.

Financial wealth will to some extent find its way into the real economy – in the form of higher price inflation. That’s what soaring precious metals markets seem to be telegraphing. 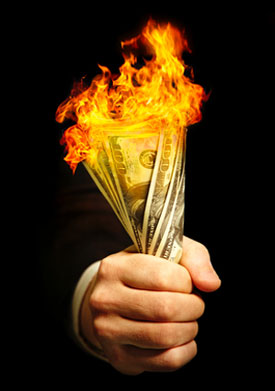 The Fed’s inflation-raising scheme is in many ways far more dangerous than negative interest rate policy.

Central bankers can manipulate interest rates with precision if they are careful. But they should not be so arrogant as to believe they can successfully manipulate inflation rates up to particular targets and keep them there.

Once the inflation genie is let out of the bottle – once consumers, businesses, and investors begin to act on expectations of higher rates of price increases – inflationary psychology can snowball faster than the Fed can issue policy statements.

Inflationary episodes like we saw the late 1970s – and like we’ve been seeing over the past four months – are characterized by extreme volatility amid dollar insecurity.

Holders of Federal Reserve Note dollars and dollar-denominated real negative-yielding IOUs are like sheep lining up to get slaughtered through purchasing power losses.

Those who want to survive the coming inflation must seek the protection of sound assets, including sound money – gold and silver.