In military terms, the phrase "locked and loaded" refers to "locking" a magazine or cartridge into a firearm and loading a round into the gun's chamber. A variant is to "lock the safety" and then load a magazine into the weapon.

The analogy in his essay is that from a technical (chart) standpoint, the price of gold and silver are building energy to the point that they are getting closer and closer to breaking out of a consolidation pattern, and beginning the next impulse in the bullish sequence of higher highs and higher lows.

The pullback this week does not negate the outlook for higher prices in the coming weeks and months.

All sorts of factors are contributing to being "loaded" into the launch chamber so that when the "hammer" is dropped, the two metals can burst out of the gate like a couple of thoroughbred race horses.

How many regular people, let alone most of the experts got it right when silver, which was supposed to spend weeks if not months working its way through chart layers from $20 to $22.50, instead cut through them like a knife, stopping just below $30?

It doesn't much matter even if gold and silver first decline below $1,800 and $22 respectively. Sure it might be "painful" but what's been happening so far is that when prices drop, physical (and miners') buying volume increases. Yet when prices rise, buying still goes up!

You may be "on board" now, but get left behind later.

As prices advance, it will become more and more compelling to "take a tidy profit" – either with the idea that you might be able to buy back on a correction, or by selling on a double and getting what in the trade has become known as "a Casey (or Katusa) Free Ride." The thinking is that once you've done this, only the market's money (representing your remaining position) will be at risk. 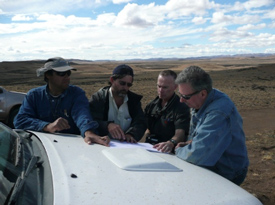 David Morgan and David Smith at a
Scoping Study on the Deseado Massif, Argentina

During "normal" runs this is often a good idea, because sustained trends tend to be relatively rare, whereas choppy sideways patterns are the norm.

But in a strong, enduring run, which we believe for metals and miners will be the case during at least the next 2-3 years, if your goal is to go for a larger portion of the bull's total profit potential, this tactic can end up being self-limiting.

Don't forget this critical strategic planning piece. David Morgan, at The Morgan Report, has performed extensive research on what the end of a secular metals' run looks like.

David determined that as much as 90% of the profit potential comes during the last 10% in time of the entire bull market! This concept is further supported by a fascinating quote recently from Incrementum. They state that:

"One can see that every (gold and silver) bull market always ended with a parabolic upward trend that lasted 9 months on average, and at least doubled the price...presenting us with a potential once in a lifetime opportunity."

We know there are no guarantees in life, but do you want to take a chance on missing such an opportunity if things play out that way?

Occam's Razor works for a reason. William of Ockham, a theologian and philosopher from the medieval period posited that, for solving a given problem, the simplest solution is usually the best. "Cutting" away unnecessary details gives it the "razor" designation.

Acquiring and holding physical gold and silver doesn't have to be complicated.

Just make sure you're buying from a trusted source, stay within a budget you've decided on beforehand, find a safe place to store your metal, and don't tell friends and neighbors.

Complexities can detract from your bottom line and limit the upside:

So... are you going to finish working your plan and consider adding to physical metal holdings during this time of uncertainty and possible price retracement, or will you step out onto the financial battlefield later with an empty magazine and nothing in the chamber?