Don't Let the Silver (and Gold) Bull Shake You Off!

Gold and silver exchange-traded funds (ETFs), a measure of large investor interest, are experiencing outflows as opposed to an almost interrupted inflow over the last few months.

Mining stocks which either look for or produce these metals have been moving sideways, testing the "mettle" of even perma-bulls.

Many investors see these as negative signs. But I view it as a Mr. Market's last big effort to "shake the tree," causing as many people as possible to fall off the galloping bull and head for cover.

As David Morgan has so aptly – and during times like this, often said, "A precious metals' bull run (especially that of silver) will either wear you out our scare you out!

These gold and silver ETF outflows should be viewed like an almost parallel universe compared to the continuing robust physical demand for these metals on the part of investors – both large and small. 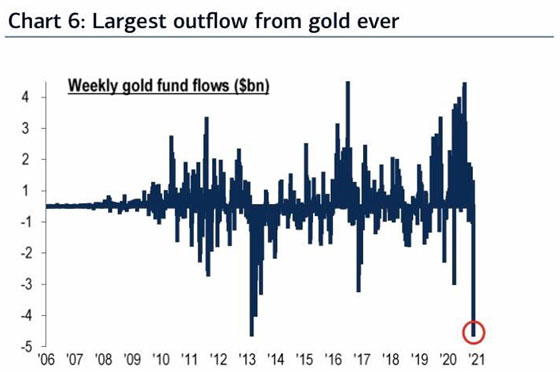 Buy When Others Are Selling

ETF in/outflows represent "hot money." But you are an "investor" not a speculator.

Buy value (physical silver and gold) in tranches (portions) and hold it for insurance, liquidity, and price protection against your other assets. And along the way, there's a good chance that you'll turn a profit too.

Now with the central banks' moving toward digital currencies, you have – in your hand, to which no one else has a claim – what has for 5,000 years served humankind as honest money.

With it, you retain flexibility (liquidity), privacy, and diversification, because its price tends to move in a non-correlated way to most other assets.

And it gives you peace of mind, because you know that in either inflation or deflation, there will always be a finite amount of metal available. Unlike fiat (paper currency) which can and will be "printed" in unlimited amounts as governments attempt to solve their mistakes in monetary policy by increasing the quantity in circulation (either digitally or physically) to infinity. 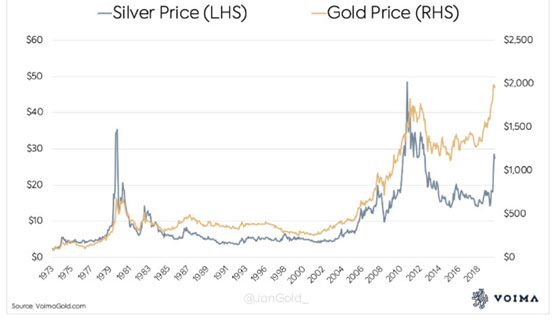 Over time, silver's price tends to mirror that of gold.

Bob Moriarty of 321gold.com has on multiple occasions, demonstrated an unerring sense of timing in regard to intermediate turns in the metals, especially silver.

Understanding that the people who buy and sell them probably have a better finger on the pulse of supply/demand factors than most analysts, he has an open order with one dealer, saying "Somebody's going to want to sell something soon. When they do, call me and I'll be a buyer...

“And sure enough I got a call from a dealer saying "Somebody just sold us some big silver bars; are you a buyer?" And I said 'Yes.' This has happened to me several times over the years and every time, it has marked the low within a few days."

Bob demonstrates he's able to remove his bias and emotions by taking an additional step away from market noise, letting another person's fear alert him that it's time to add to his own holdings.

It's watching the antics of herd-behavior without allowing yourself to become consumed by it. And by the way, these occurrences are repetitive – going much farther back than the infamous South Sea Bubble – and will remain operative and predictable just as far into the future.

Silver's Eventual Trajectory May Be Similar to Bitcoin

On a smaller scale, silver did something similar when it rose above $20, and instead of spending months backing and filling between $18 and $21, it shot up to just under $30/ounce.

When silver finally decides to begin its next powerful impulse leg to the upside, expect it to keep confounding the technicians as it tears through chart "resistance" levels, just as BTC has been doing.

As one metals' dealer recently stated publicly, "As the paper price of silver falls, even though it is somewhat if not totally counterintuitive to what we would expect, the physical demand is stronger and stronger, as the price falls more and more."

Furthermore, he said recently, "On the COMEX, we're seeing as much silver being pulled off the exchange by the subsection called "Others" – sovereign nations, businesses, and wealthy people – during every recent delivery month as is usually the case in a typical year." (Typically, the categories involved in this activity would be the Speculators (hedge funds) vs. the Commercial Banks.)

Another eventual similarity? Now that BTC seems to be going mainstream, it has been announced that between PayPal and Square alone, all of the bitcoin "mined" in 2020 has been spoken for. Thus, anyone else who desires to own even a fractional "coin" must purchase it from someone who already owns it.

If bitcoin can rise and stay above $20,000, every current owner will be holding at a profit, with few being willing to part with their holdings until much higher prices are reached.

Now imagine this scenario for silver.

At some point going forward, investor demand, along with a few big industrial users - think EV manufacturers, electronics or solar panel producers - decide to "lay in" large quantities, or even buy outright a mining producer as Tesla has been looking to do with nickel.

What do you think might happen to silver prices – and premiums – if "all of the silver mined globally in a year has been spoken for"?