The biggest financial paradigm shift in our lives is underway, and there's no turning back. No one knows exactly what it's going to look like going forward nor how we'll be able to get there.

A working definition of "paradigm" taken from dictionary.com is that it is "a framework containing the basic assumptions, ways of thinking and methodology that are commonly accepted by members of "an operating system." Think global to local and buy/ sell/exchange finance.

When a new paradigm starts being formed, an original set of rules has to be put together in order to operate successfully within it. Most of the rules that worked in the old paradigm(s) no longer apply. (An example would be trying to communicate with business associates and family by sending letters instead of email via the internet.)

During the new system's "early days," everyone using it is pretty much in the same boat as we all attempt to figure out what the rules are, how to best apply them, and what the results might be. Getting it right will hopefully enable us to be safer and more successful in our personal and professional lives.

The national and global financial systems were already under great stress due to mismanagement, indebtedness, the Covid response, and rising socio-political unrest.

To cite just two examples, the Canadian government's response to the truckers' drive to Ottawa, and the invasion of Ukraine by Russia and the West's response to it have inflicted structural damage that could destroy the whole house of cards.

At minimum it is sweeping away operative assumptions most of us have followed in order to provide predictability, safety and financial growth.

This is not the place to argue the merits for or against one side or the other, but to state that the world is changing, and in many ways will never be the same. 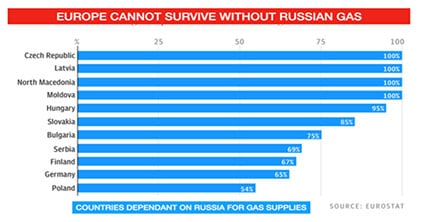 Anyone reading the above can list an additional dozen. The point being that the few remaining assumptions of our money being safe, accessible, and utilizable as we see fit have been shattered.

Neither the (hopefully) inevitable end of the war in Ukraine, nor effects of the Canadian truckers' strike will restore the attributes most rational folks have held onto throughout what Germans refer to as Sturm und Drang ("storm and stress") -- trust in others, and confidence in the accessibility and value of our money.

Doug Casey, an investment and privacy doyen since the 1970's says,

"The only practical defense for the average guy is to accumulate gold and silver in personal possession... That's because the only financial asset that's not simultaneously somebody else's liability is gold. Unfortunately, the average American neither understands gold (or silver) nor has any. Will that change in the future?"

The Message? The financial markets, including precious metals, are in sea change mode. Looking to the past is not going to enable you to thrive and survive facing tomorrow's challenges. A glimpse of what to expect taken intraday from the Energies and Metals market action can be seen nearby: 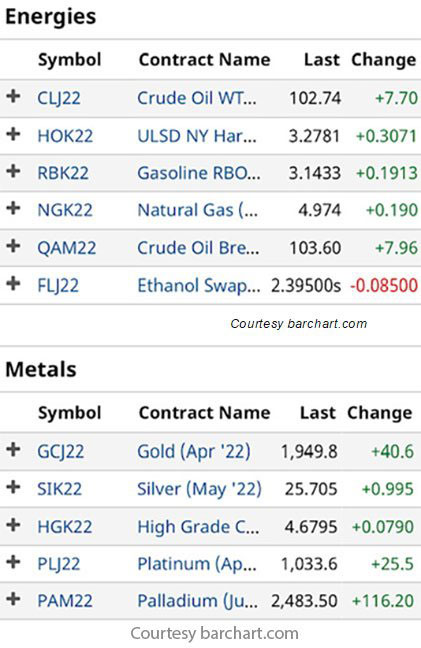 Expect persistent 2-way volatility in the entire commodities sector, along with ongoing inflation.

A few days ago, a two day rise of 250% in the price of nickel shut down its trading on the LME. Wheat futures rose for several consecutive days at the expanded .85 cent/day limit. In a month, check your grocery store for the price and availability of grains.

Care to guess what this will do to today's "officially-stated" 9.5% inflation rate (actually closer to 15-20%)? We've been seeing almost everything we use this year rise at least 15%, with +25% by no means an outlier. 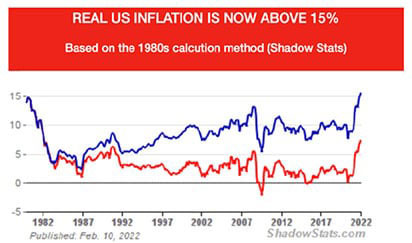 The real danger going forward? An evolving built-in expectation by people that across-the-board inflation is here to stay...and it's going to get worse. Leading to a self-fulfilling prophecy as everyone "buys ahead" on anything they might need (think toilet paper buying on steroids), leading to hoarding for the sake of asset value protection and barter.

If folks are waiting for today's "party carriage" -- fiat -- what David Morgan has long called "paper promises" to turn into a pumpkin of worth-less value, then be prepared to join the ranks of others in Lebanon, Turkey, Argentina, Mexico, Venezuela -- and yes, Russia, as you watch the nominal value of your greenbacks shrivel.

And if you're not sure you "have enough"? Well, then don't just stand there. Do something productive!