Early this month, Congressman Alex Mooney of West Virginia introduced the Gold Standard Restoration Act (H.R. 9157). If enacted into law, it would require public disclosure of the federal government’s gold holdings and eventually define the dollar as a weight of gold.

For the moment, the bill’s chances of passage are as nil as nil gets. Sound money, whether it’s gold or silver or paper that is “backed” by one or both metals, may not acquire a sizable constituency again until a monetary disaster demands it.

That’s a sad commentary on the general state of economic knowledge. In the meantime, we can at least hope that Mr. Mooney’s bill may stimulate a long overdue discussion.

America is a nation whose very independence was first jeopardized by unbacked paper money only to be purchased later by precious metal. That’s a story often left out of history classes but I summarized it in The Times That Tried Men’s Economic Souls. After the runaway inflation of continental dollars, I explained,

A currency reform in 1780 asked everyone to turn in the old money for a new one at the ratio of 20 to 1. Congress offered to redeem the paper in gold in 1786, but this didn’t wash with a citizenry already burned by paper promises.

The new currency plummeted in value until Congress was forced to get honest. By 1781 it abandoned its legal-tender laws and started paying for supplies in whatever gold and silver it could muster from the states or convince a friend (like France) to lend it. Not by coincidence, supplies and morale improved, which helped to bring the war to a successful end just two years later.

The enemy observed the last days of the continental hyperinflation with delight, expecting that it was a harbinger of inevitable British victory. Historian Barbara A. Mitchell writes,

As the government printed more money, Continental currency continued to hyperinflate. The council in Philadelphia began publishing the month-to-month rates of currency to specie, which weary consumers then multiplied by three.

When the currency finally collapsed in May 1781, its ratio to specie was officially 175 to 1, or 525 to 1 by public reckoning. A spirited procession was staged in Philadelphia to mark its collapse, with people marching with dollars in their hats as paper plumes. An unhappy dog trotted alongside, tarred and pasted with the worthless paper.

America’s war with its mother country commenced in 1775 but as late as 1780, it wasn’t going well for the rebels. General George Washington’s troops had lost more battles than they won. While Congress paid in depreciating paper, supplies and suppliers ran for the hills.

Washington’s troops hadn’t been paid in months. With families at home that depended upon them, it was not at all clear that those troops would stick around. Rumors swirled that the Army might melt away in a desperate act of mass desertion. Mitchell reveals,

As he planned for the Yorktown campaign, Washington was desperate for hard currency to pay his troops. He wrote to Robert Morris [the famous patriot and financier of the Revolution]: “I must entreat you, if possible, to procure one month’s pay in specie for the detachment under my command. Part of the troops have not been paid anything for a long time past and have upon several occasions shown marks of great discontent,” an understated reference to the mutinies by some Continental troops and the general unrest among many.

Then the unexpected occurred and dramatically changed the course of the war. Two hundred and forty-one years ago this week, sound money helped save the day during the critical Battle of Yorktown.

A French naval fleet under the command of Admiral de Grasse was well aware of the dire financial straits of Washington’s army. De Grasse stopped in Havana, Cuba in mid-August, expecting to secure gold and silver (mostly from mines in Mexico) he planned to deliver to the Americans, only to discover that the specie hadn’t yet arrived.

So, he solicited private contributions from the residents of Havana, who came through with an amazing half million pesos in silver and a smaller measure of gold—enough to pay Washington’s men and keep the Continental Army intact. 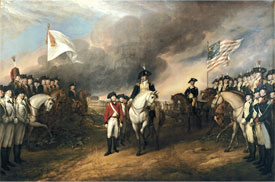 De Grasse knew that the clock was ticking, that Washington would soon move on Yorktown and that London would send a fleet to relieve British troops holed up in the city. To the enormous satisfaction of Washington and his men, de Grasse arrived in time. The troops were paid in sound money.

The three-week siege of Yorktown ended on October 17 when British General Cornwallis, unable to escape by sea because of the French fleet, surrendered. The war that so few once thought could ever end in American victory, was effectively over.

I cannot recall any moment in history when either an army or a cause were mortally endangered by sound money and were saved at the last minute by depreciated, fiat-paper money. Yorktown was a victory every lover of liberty and sound money should celebrate, now and forever.

Whatever consideration Rep. Mooney’s Gold Standard Restoration Act gets, it should be informed at least in part by the role sound money played in America’s remarkable history. It starts at Yorktown.

Lawrence W. Reed is FEE's President Emeritus, Humphreys Family Senior Fellow, and Ron Manners Global Ambassador for Liberty, having served for nearly 11 years as FEE’s president (2008-2019). He is author of the 2020 book, Was Jesus a Socialist? as well as Real Heroes: Incredible True Stories of Courage, Character, and Conviction and Excuse Me, Professor: Challenging the Myths of Progressivism. Follow on LinkedIn and Parler and Like his public figure page on Facebook. His website is www.lawrencewreed.com.