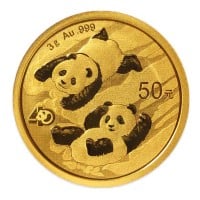 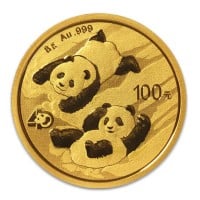 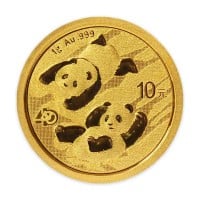 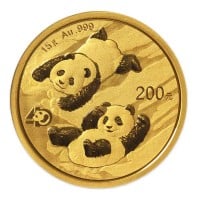 The Golden Panda is one of the most popular bullion coins in the world and China’s first gold coin. It’s been around since the early 1980s and has gone through many changes over the past 3 decades.

One thing that’s remained constant, however, is the Panda’s unwavering popularity among both collectors and investors. It is increasingly popular in the United States. Sales of the coin rank below the American Gold Eagle and Canadian Gold Maple Leaf, but above other famous coins.

Read on to learn more about these popular Chinese coins and whether they’re still a good investment.

The History of the Chinese Gold Panda

Golden Panda coins have been legal tender in their country of origin since their introduction. The coins are primarily made in mints located in Beijing, Shanghai, Shenyang, and Shenzhen. They’ve been made in other mints as well, though the coins rarely feature any particular mint mark. Rather, it is the image of the Temple of Heaven depicted on the obverse side that varies from mint to mint.

The story of the Chinese Gold Panda coins began back in 1982, when the first coins featuring the country’s beloved herbivore were issued. The starting set of Gold Pandas was made in 1/10, ¼, ½, and 1 troy ounce sizes. They had face values ranging from 10 yuan for the smallest to 100 yuan for the biggest one. The ¼ oz. coin had a face value of 25 yuan, while the ½ oz. coin was worth 50 yuan. The following year, the 1/20 oz. coin was introduced. It had a face value of 5 yuan and has been included in every subsequent set.

Over the years, larger coins have been issued, albeit in very limited quantities. One of the largest ever was the 1 kg coin introduced in 1997. The first series had only 58 coins. From time to time, China also produces limited series of 5 and 12 oz. Gold Panda coins.

Between 1986 and 1992, the Gold Pandas were also offered in proof sets aimed at collectors.

Design of the Gold Panda Coins

As a rule, Gold Panda coins feature a different picture of a panda every year on the reverse side. The only year which repeated the former year’s picture was 2002. The move caused serious discontent among collectors and the rule of changing the picture annually was quickly reinstated and remains to this day. The reverse side usually features the face value of the coin, size, and purity (Chinese Gold Panda coins are made of .9999 24-karat gold and have been since inception).

The obverse side features the Temple of Heaven (the Hall of Prayer for Abundant Harvest) which was built between 1406 and 1420 during the Ming dynasty. The coin’s year of issue is featured below the Hall’s stairs, and above the temple is the inscription “Zhonghua Renmin Gongheguo” which translates to “People’s Republic of China.” If a particular coin is a limited issue coin or part of a commemorative series, it will be so marked on the obverse side.

Aside from gold coins, Chinese mints also issue silver panda coins. Due to silver being more affordable than gold, silver panda coins trade in larger quantities. They are great for beginners in precious metal trading. Palladium and platinum versions of the Panda exist, as well.

Should You Invest in Gold Pandas?

Chinese Gold Panda coins are traded by investors worldwide and many expect these coins to continue growing in popularity as the wealth and influence of China rises. The recent change from troy ounces to grams hasn’t impacted the coins’ marketability in the US much at all.

Value-wise, 24-karat .9999 gold always has an allure, and generally commands top dollar upon resale. Gold is, of course much more expensive than silver and the affordability may leave some investors out of the market. However, Pandas are available in sizes as small as 1 gram – well within the reach of most investors.

Gold Panda coins, owing to their legal tender status, may be more trusted and easier to trade than privately made rounds and bars. They also have a higher premium in comparison, as the latter two are priced more closely to the spot value of their precious metal base.

Chinese Gold Panda coins will be a great addition to any investor’s holding. Thanks to their large production runs, they are in good supply and premiums are affordable. The Panda design makes them charming and popular. Buy these coins with confidence. They will be easy to sell or trade with a strong value when the time comes.