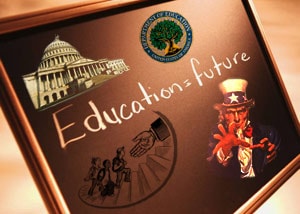 Recently, the ZeroHedge website reported how the Fed is looking to implement plans to teach in our schools the supposed constitutionality and wisdom of the Federal Reserve System.

For sound-money proponents and constitutionalists, this is propaganda – and an overt attempt to use the public school system to systematically indoctrinate our young people.

An associate of mine recently visited South America. On his return trip from Peru to the U.S., he said it was easy to spot the Americans on his flight: " They were the only ones, like Pavlov's dogs, that automatically took their shoes off to walk through security."

In Peru, like most countries in the world, travelers are not treated like criminals nor required to remove their shoes or submit to x-ray strip searches. Yet, in a foreign country and without question, perfectly healthy Americans mindlessly followed their TSA conditioning.

It Would Seem the Fed Is Hoping for the Very Same Result...

Here are direct quotes about of the objectives and procedures of the Federal Reserve's school lesson plan:

"... The amount of money in the economy affects the overall price level. Inflation is an increase in the overall price level that reduces the value of money... Inflation reduces the value of money... In the long run, inflation results from increases in a nation's money supply that exceeds increases in its output of goods and services."

What's Left Out of the Fed's Lesson Plan Is Telling...

From what I could see, there's nothing in the lesson plan that explains that the Fed habitually inflates the money supply, which leads to higher prices and the devaluation of the dollar:

Parents still do play an important role in rounding out a child's education. You can, and should, serve as a counterbalance to government-run education centers. Find out what your children (grandchildren) are learning in school and, if appropriate, offer your own input and alternative view point after school, on the weekends, and on vacations. It's a parent's duty to monitor what is being taught.

Let the youngster know that school is not the only place to gain knowledge – much of the knowledge they'll need throughout life is found outside the walls of a school.

If you feel your child is better served with an education outside of the mainstream, you're not alone. Millions of Americans take advantage of homeschooling. In fact, it is quite common today to find many home-schooled students attending the top universities. Children schooled at home excel in university and afterward.

Here's some information on homeschooling for beginners as well as links to find homeschool groups in your area: