Yikes! This Should Freak Out ALL Paper Gold Investors…

In this week's Market Update, we reveal new data which shows just how little physical gold is backing the public exchanges in the United States. It's a new extreme!

But first, an update on the recent price action in precious metals…

The coming days promise to be interesting in the metals markets. Gold prices, stronger in recent weeks, appear to be building momentum based on improved technicals. Silver, on the other hand, hasn't yet broken out of a multi-week trading range that continues to see prices oscillate around the $20/oz level.

Fed officials will meet on Wednesday and could announce another modest round of tapering. Such an announcement has the potential to drag on gold and silver prices, though a negative reaction is not a given. Gold and silver emerged unscathed following last month's Fed decision to reduce bond purchases by $10 billion per month.

And there is more news of platinum supply disruptions.

Workers at the world's three largest platinum mines went on strike again last week. The strike is the largest since 2012, when a dispute escalated to violence and 34 people died. Ongoing labor troubles, combined with power outages and a rapacious South African government, make the future of platinum supply uncertain. So far, we have seen only muted reaction in the futures market.

Anyone planning to stand for delivery on a COMEX gold contract might want to avoid looking at the chart below. It should make all holders of paper claims on real gold toss and turn at night! 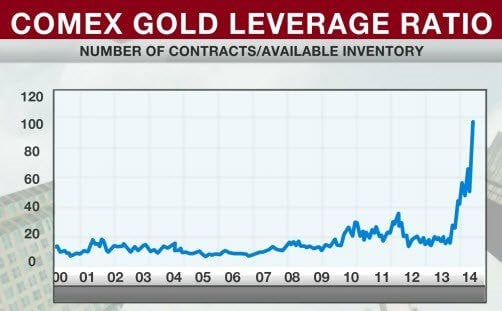 The ratio of open contracts, or claims on inventory, relative to the number of “registered” ounces available to deliver has been spiking for months. At 100 to 1, the leverage is more than 2 ½ times more than the peaks in 2010 and 2011.

To put the inventory shortage into perspective, if a single investor were to buy 300 gold contracts (the maximum number allowed under exchange rules) and stand for delivery, it would wipe out nearly all of the available stocks. Tres Knippa, a veteran COMEX floor trader with Kenai Capital, recently highlighted these shocking developments on Canada's Business News Network.

An actual failure to deliver, or default, in COMEX precious metals futures is unlikely -- but only because COMEX officials have a convenient alternative. They reserve the right to settle contracts in cash if necessary. But cash settlement will certainly be viewed as a de facto default.

And the turmoil created in the broader markets by such an event would be substantial. The commodity exchanges are designed with leverage built in, but these contracts lose value if the tie to the underlying physical metal is completely severed. Since the COMEX is still a major price-setting mechanism for the global gold price, the short-term result of cash settlements in the COMEX could actually be lower spot prices and higherpremiums for physical metal, as investors holding contracts may sell in reaction to the shortages and scramble to get their hands on real metal somewhere else.

We could even witness the end of the COMEX as a useful tool for price discovery in precious metals, with exchanges in Asia or private wholesale markets filling the breach.

It looks increasingly like something has to give. Demand for physical metal at today's low spot prices is far outstripping supply of new registered inventory stocks in the West, and hundreds of tonnes of physical gold are being shipped to Asia. We doubt COMEX participants are willing to accept leverage at 200 or 300 to 1. Either the exchange is going to break, and we'll see cash settlements, or prices will rise in order to lure more investors into parting with their gold bars.