4 Catalysts for a Bull Run in Precious Metals

Yes, precious metals are still up for the year. But since mid-March, gold, silver, platinum, and palladium all gave back a large portion of their 2014 gains. The metals can be expected to continue moving in fits and starts in the months ahead as they do battle with overhead resistance levels.

Fortunately for the bulls, a number of potential catalysts exist that could propel prices through congestion zones and, eventually, into the uncharted waters of new record highs. Below you will find some likely catalysts for the next major leg higher in precious metals.

Catalyst # 1: Technical Breakouts on the Charts

The number one indicator for traders considering taking a position in a given market is price itself. There are any number of fundamental reasons why an asset could or should go higher, but a bull market must prove itself by breaking out above resistance levels and holding support levels. Up trending prices instill more confidence and beget more buying, which feeds the momentum that drives major bull runs. 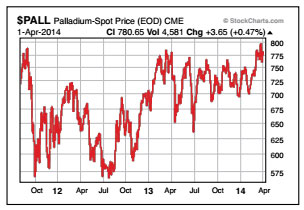 Gold and silver have yet to attract the momentum players in a big way, but prices appear at least to have put in a bottom after suffering sharp declines last year. Meanwhile, the lesser-known precious metal palladium broke out in early March to touch its highest level in nearly 3 years. Palladium's chart looks the strongest of all the metals, and it has the clearest path forward to new record highs.

Perhaps palladium will serve as a leading indicator for gold and silver, which each have a lot of ground to make up. Silver especially has a lot of room to run, with prices still more than 50% discounted from the highs seen in 2011.

Precious metals got a bit of a safe-haven bid in early March as escalating unrest in Ukraine threatened to drag Russia and the U.S. into a new Cold War. The broader threat, though, is to the status of the U.S. dollar. The Obama Administration risks pushing Russia and China into selling off a meaningful portion of their massive hoards of U.S. Treasury bonds. The two world powers could also work to undermine the “petro-dollar” by trading oil and other commodities in yuan, rubles, or other currencies.

If geopolitical tensions between China and the U.S. were to flare up – potentially over our treaty-bound duty to stick up for Japan – gold prices could go ballistic.

World events can cause a market to move sharply in a short period, but the impact can be fleeting unless other catalysts kick in to contribute to a sustained trend. Make no mistake, gold and silver are indispensable crisis hedges. Long-term investors, though, need to pay attention to other potential market-moving forces.

Charges of gold and silver price manipulation have been swirling around the fringes of the market for many years. Now, however, evidence for the existence of manipulation in the futures markets is garnering the attention of the mainstream financial news media.

German regulators recently began investigating manipulation of the London gold fix. And a federal lawsuit filed in the U.S. alleges the metals markets have been rigged. This suit is based on the as-yet unpublished report by Rosa Abrantes-Metz – the whistleblower who helped prosecutors with the LIBOR-manipulation fraud uncovered last year.

Silver market expert David Morgan had this to say in an interview with Money Metals's Mike Gleason, host of our Weekly Market Wrap podcast: “Bloomberg – and Bloomberg is a well-known financial publication – reported that the gold price is being manipulated, which followed shortly on the heels of a similar report in London's Financial Times. Any report like this in the mainstream media is a big deal. And to have it reported twice is indeed an important development…”

Silver-Investor.com's David Morgan (pictured right) believes that precious metals prices have been artificially low, and that creates opportunity for investors. Though we can't predict specifically when market-rigging schemes will blow up, we can be confident that, in the end, the laws of supply and demand will win out. Like a beach ball that is held underwater and suddenly released, precious metals prices could shoot up quickly, forcing physical buyers to pay much, much more (assuming physical metal can be sourced at all).

Real, physical demand must ultimately be satisfied by physical supply – not paper contracts. Artificially low prices for a commodity cause supplies to contract – it's Economics 101. But for a good while, supply tightness can be counteracted in the precious metals markets by diverting physical demand into cash-settlement futures contracts and other derivative instruments.

That's why investors should insist on holding precious metals in physical form – coins, rounds, bars, etc. If you don't own gold and silver in a form you can hold, you may one day find that you don't own it all!

Again, physical supply and demand will ultimately determine in what direction prices have to go. The biggest catalyst of all could be a chronic supply deficit.

By the end of 2013, average all-in mining costs for gold and silver exceeded the spot prices for the metals – a rare condition that usually coincides with major bottoms (as it so far appears to have done). It's rare for production costs to exceed the price at which a raw commodity sells because producers can't and won't produce at net losses for very long.

The effect of persistently small (or negative) profit margins has been significant. Some of the smaller miners have gone out of business, while the bigger ones have been forced to scale down, reduce capital expenditures, and “high-grade” their fields (produce the easiest-to-get, lowest-cost ounces, leaving future, more expensive mining operations on hold until prices render them economically viable). Mining output will soon enter a prolonged period of diminution, even as global demand figures to remain strong. In other words, it will take years for mine supply to ramp back up.

Last year saw record gold buying among Chinese consumers. In the U.S., it was a record year for Silver Eagles sales. Investment demand in the U.S. overall came in soft, however, due to hedge fund and ETF liquidations. The magnitude of the selling was a one-off event that won't be repeated from these levels simply because there aren't that many tonnes of metal left to dump.

When safe-haven investment inflows start pouring back into precious metals in a big way is unknown. Investment demand is the wild card. It only takes a tiny proportion of large institutional investors to decide to move a modest percentage of their assets into precious metals to cause a large impact on the markets. An incremental increase in the percentage of average, ordinary folks who own gold or silver bullion (currently, less than 2% of the population) could accomplish the same thing.