You and I Have No Right to Be Scared

So, you're thinking about buying some gold or silver, but you're still hesitant.

You've paid attention and done your homework. You understand your nation's financial health is nowhere near what your government, Wall Street, and mainstream news are saying.

You're told the unemployment rate is 6%. You wonder how that could be when one out of three working-age Americans, 90 million souls, are out of work. You have relatives and friends not working, maybe several, and you notice it didn't used to be that way. The numbers sound to you more like Great Depression than Green Shoot Recovery.

Your government puts inflation at 1%, but you see the supermarket has higher prices and smaller packaging. You pay almost twice to fill that gas tank than just a few years ago. You see your paycheck doesn't grow, while government does.

Your Little Voice Inside Is Saying Something’s Not Right

Your research tells you the dollar has lost 99% of its value since 1913. You're thinking your dollars will lose more purchasing power as the years go by... and predictions of a crashing economy and hyperinflation might come true, leaving you ruined financially.

You're scared. I know, I've been there. You have every right to be scared of what's coming.

Then, you take a next step. Your homework points to converting some of your savings into gold and silver to protect your wealth. 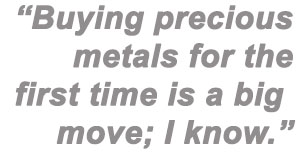 Buying precious metals for the first time is a big move; I know.

Now you worry if that's the right decision, that perhaps you don't yet know enough about precious metals. You've heard they make awful investments, while the Dow is hitting all-time highs. When the time comes to convert some cash into gold and silver, once again, you get scared.

Except this time, you have no right to be scared. None at all. Neither do I.

The folks who had a right to be scared – the heroes in this story -- were the folks who ponied up their cash back in the 1990s and through the early 2000s, when Gold was bouncing up and down (mostly down) in the $250 area and silver was hanging around at $4 and sometimes $5 per ounce. Gold priced in dollars was down 70% from its 1980 high mark, silver down 90%. Ugly declines.

Those buyers were following their educated instincts that an inept government was printing too much money, that truth was purposely hidden, that lies were coming fast and furiously, that rough times were on the way. They stayed scared whenever their silver and gold took huge hits in dollar value several times along the way, causing them often to doubt their decisions.

Precious metals buyers back in the 1990s felt alone with their suspicions about government and growing debt. They couldn't find very many others who saw things their way. They had summoned their courage to act, but there was no one reinforcing their decisions. And no one was pounding home the gold and silver story.

Dealers Didn’t Want to Mess with Bullion Years Ago

Making it tougher on buyers of decades past, there was no one offering easy transactions. In those days, the bullion counter was generally at a coin shop, with precious few of those around. Coin dealers made their money on expensive rare coins and hobby supplies.

Bullion was the last thing dealers wanted to fool with because, frankly, it's a lousy mark-up.

Coin dealers disliked bullion so much they gave the name "junk silver" to the now widely popular 90% silver junk coins coins, the pocket change that circulated in America up until 1965. Imagine calling your own product “junk.” Often the dealer had to special-order the bullion, because he just didn't bother to keep bullion in stock.

Coin shops were never crowded in those days. When the bullion customer stepped up to buy some U.S. Silver Eagles or privately minted rounds, he stood there alone. There was no one standing beside him saying, “Yeah, I have some of those. I love them.”

When he left the shop with his little handful of coins, there was no one behind him to sell it to if he should change his mind. He may have proudly showed his coins around, but found no one cared about these curios. He was all by himself.

The Buyers of 15 Years Ago Saw the Future

That guy 15 years ago converting paper money into silver and gold had no 9-11 to reference. He had never heard of bin Laden or Barack Obama. He had no NSA, no IRS trashing his beloved Constitution. 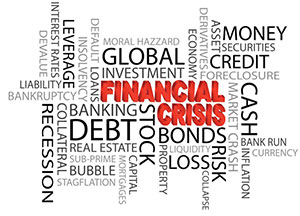 He wasn't hearing every day that his children were in hock for uncounted trillions of dollars for the next fifty decades. Inflation, unemployment, and national debt numbers seemed normal. There were not any of today's red-letter, neon billboards screaming catastrophic economic collapse. His grown kids fresh out of college were not living at home.

Wall Street criminals still went to jail. His telephone and his new car did not report his every move to a government computer. He could still keep his doctor if he liked him. He went home after work to relax with his family, watched football and Seinfeld re-runs, and sipped a beer. The worst national black-eye still popping up on his TV was Monica and Bill.

The Dow was hitting all-time highs. The newscast didn't mention the Dow would crash three times in the next eight years. Or that the Federal Reserve would print trillions of dollars to prop it back up.

Yet he had his suspicions and his instincts, and he felt a responsibility to protect himself. He continued plunking down his cash for his coins standing there by himself. The honor for having foresight and confidence in the face of undefined fear and vague uncertainty is reserved for those who stood all alone when no one else understood (or cared) how scared they were, or why.

You and I, on the other hand, today enjoy the absolute advantage of having witnessed every single confirmed and verified atrocity of the past 15 years which back then was unthinkable.

You and I today are NOT standing all alone, and we’ve all had fair warning. We don't have the right to be scared with indecision.