Precious metals enter the new week on the strongest footing in weeks after prices surged through important resistance levels.

Look for nervous shorts to continue covering and drive further price gains this week -- particularly if the technical strength is bolstered by fundamental news. Investors will be watching developments in Iraq along with some important economic reports on home sales, durable goods, and personal income. As usual, should these reports disappoint, precious metals will likely gain as the market becomes even more certain the Fed will continue stimulating.

Even as growing inflation pressures in the economy are showing up in higher food and energy prices, the Federal Reserve last week telegraphed its intent to maintain low interest rates for the foreseeable future. This, combined with safe-haven buying fueled by mounting turmoil and violence in Iraq, drove a near 3% rise in gold and a 6% jump in silver -- on top of their significant gains during the prior week.

Some precious metals investors seek an explanation for the poor performance of their investment over the past three years. Could we be facing a deflationary collapse, just like we did during the 2008 financial crisis before the Federal Reserve responded with trillions of dollars in money printing?

Prominent deflationists, including Harry Dent, argue that Central Bankers have failed to produce significant inflation and another crash is looming. They posit gold and silver prices will get dragged down along with other assets, including stocks and real estate. 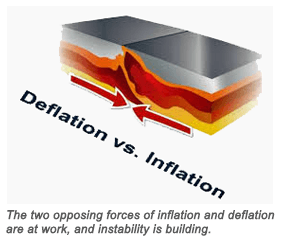 Deflationists argue that the crisis levels of debt cannot be repaid. Central Bankers will ultimately be powerless to stop what is coming -- outright default is inevitable and cash will be king.

While we agree with what Harry Dent and others have to say about too much debt, they underestimate the determination and ability of central bankers and governments to ease the real cost of the debt burden by making money plentiful. Those like us who believe inflation is the real threat expect a debt default as well -- but a stealth default through currency debasement.

In other words, debts will be paid with increasingly worthless dollars.

The deflation camp cites the official Consumer Price Inflation (CPI) numbers and asserts inflation is near zero. After all the QE, the Fed has failed to devalue the dollar significantly.

But no one should rely on the official numbers. As we have often covered, the U.S. government’s statistics, including all the “hedonic adjustments,” are specifically managed to understate the real inflation rate.

The Bureau of Labor Statistics doesn’t even measure key components of asset price inflation. The roaring stock markets aren't measured in the CPI number, but they are the current beneficiaries of Fed cash creation. So are home prices.

Current Fed policy remains highly accommodative despite ongoing tapering. Central bankers remain publicly committed to an official inflation target of about 2% per annum and have indicated a willingness to overshoot in the face of a weak job market.

By all accounts, the Federal Reserve intends to maintain Zero Interest Rate Policy indefinitely. What’s more, if we get a collapse in equity or real estate prices, count on the Fed to double down on stimulus as they ride again to the rescue. 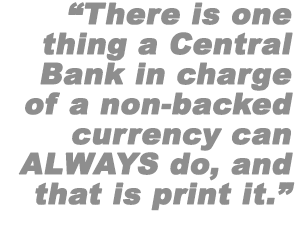 Deflationists generally believe the Fed will quit monetizing Treasury debt when the federal government is unable to find willing buyers elsewhere. They expect Fed officials to avoid political pressure and turn their backs when asked to help fund burgeoning entitlement programs. They look for interest rates to rise and the Fed to stand idly by while interest expense crushes the Federal budget. And they somehow expect the Fed is going to let the privately held banks that own it get stuck with trillions in bad debts.

Nobody at the Fed or in Washington DC is immune to political pressure or appears inclined to let banks and borrowers bear the consequences of their choices. And, we can't find any examples in history of a central bank not bound by a gold standard allowing massive defaults and a strengthening of their fiat currency.

The temptation to inflate always proves too powerful, and the pain of deflation always seems too much to bear. There is one thing a central bank in charge of a non-backed currency can ALWAYS do, and that is print it.

That is why physical precious metals, whose supplies can’t be expanded in unlimited quantities, remain an essential component of any well-diversified investment portfolio. The good news for those who still need to grow their positions in the metals is that gold and silver today are selling at discounted prices relative to the long-term inflation protection they provide.