The Fed Printed Trillions with Almost Nothing to Show for It

Federal Reserve officials announced a plan to print $85 billion dollars per month at the end of 2012, and metals investors licked their chops. Two and a half years, later those investors are licking their wounds instead. Who knew you could monetize that much debt without driving inflation and metals prices dramatically higher? Virtually no one anticipated the outcome when the program was launched. Certainly not metals investors. 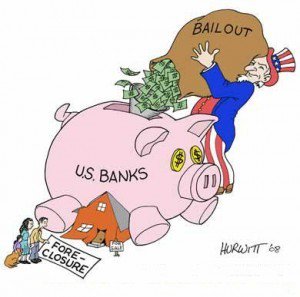 Officials billed the program as stimulus. The economy was definitely sick. When “Helicopter Ben Bernanke” prescribed huge amounts of money creation as the cure for what ailed it, the advice was exactly what we expected from the Keynesians running monetary policy.

Economists, including former Fed Chair Alan Greenspan, now declare Quantitative Easing a failure. The stated goal of the program was to reignite economic growth, but it fell far short. The percentage of eligible Americans with a job sits at 40-year lows. Real income growth is non-existent and remains well below levels prior to the financial crisis. And commodity prices have fallen -- driven in large part by weak demand. That sure doesn’t look like success.

The mistake is in assuming the stated goal of Quantitative Easing was the actual goal. In hindsight, it appears the program was designed as stimulus for banks and not for the economy at large. By that measure, QE has been nothing short of miraculous.

A good portion of the trillions of dollars created never got far from the Mariner-Eccles building -- home of the Fed in Washington, DC. The freshly printed cash was used to underwrite government spending and also prop up the housing market through purchase of real estate debt.

All this stimulus ended up re-liquifying the dysfunctional banking system, and $2.4 trillion in bank cash currently sits on deposit with the Fed as excess reserves. Much of the rest was lavished on prop desk traders who in turn speculated on equities and bonds. The past 3 years may not have been great for most people, but they have been wonderful for Wall Street banks.

Today, the financial sector is even larger relative to GDP than it was prior to the 2008 financial crisis. And it is no accident. The Fed handsomely rewarded banks for holding excess reserves.

As the primary regulator of banks, it has been slow to intervene or penalize some patently unethical behavior at prop trading desks. If Fed officials intended for QE eventually to fund low interest rate loans for businesses investing in the real economy, they would not have rewarded banks for such unproductive behavior.

The lesson for metals investors is that making assumptions about the motivations behind Fed policy is risky. Perfectly logical predictions can turn out wrong. Now is a good time to heed those lessons. And as Jim Rickards said in last week’s Money Metals podcast, the Fed governors have a terrible track records and are making it up as they go.

Many investors assume that the higher interest rates expected soon will be bad news for gold and silver prices. But, they have good reason to expect the Fed will delay. The U.S. dollar is extraordinarily strong, CPI is verging on negative, and there are signs the anemic domestic economy is about to stumble terribly. If officials announce rate hikes anyway, many discouraged investors will sell metals and expect even lower inflation.

Once again, they could regret those assumptions. It is “mission accomplished” on recapitalizing the banks. Couple that with CPI numbers and the relative strength in the U.S. dollar against other fiat currencies, and it now looks like an opportune time for the Fed to finally get serious about generating price inflation and trying to spur growth.

They can do that even with rates on the rise. Rising yields and a higher rate of inflation will encourage banks to deploy their excess reserves. Those trillions, representing potential inflation, lie waiting. The Fed need not print one dollar more.