Trading the Platinum to Gold Ratio

As a general rule of thumb, platinum is a great bargain when it sells for cheaper than gold. Tweet This

The gold:silver ratio hit a multi-year high of over 83:1 earlier this year. It has since come down to 73.4:1, as of Friday’s close, as silver has gained strength in this year’s rally. On a historical basis, silver remains a relative bargain compared to gold. The ratio has much further to fall in a major bull market.

Is Platinum More Expensive than Gold?

Another important ratio is that of gold to platinum. To gauge whether platinum is trading at a premium or discount to gold, we can simply reverse the ratio. This year platinum traded at its deepest discount to gold since 1982. The platinum:gold ratio currently comes in at 0.8:1, meaning platinum price per ounce sells for 80% of what an ounce of gold commands. 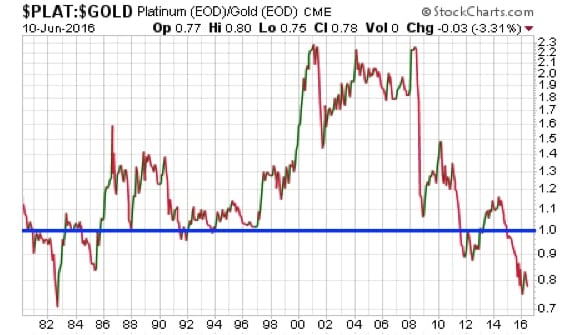 As a general rule of thumb, the price of platinum is a great bargain when it sells for cheaper than gold. As the chart shows, the platinum:gold ratio periodically gets drawn back like a magnet to price equilibrium at 1.0. It’s not a law that platinum must return to equilibrium with the gold price or spend more time than not exceeding it. It just happens to be a strong tendency supported by sound fundamental reasons, including platinum’s supply scarcity.

When platinum’s discount gets to a multi-decade extreme, as it is now essentially, then precious metals investors have an incentive not only to favor platinum over gold – but to trade out of gold for platinum.

We certainly don’t recommend giving up a core position in gold. Gold has unique qualities as the ultimate, most recognized form of money. However, for those who have accumulated an outsized position in gold and hold little or no platinum, now may be an opportune time to trade some gold for some platinum.

Let’s assume you wind up getting an exact even exchange of 10 gold ounces for 12 platinum ounces. Three years later, the ratio has risen from 0.8 to 1.2, around the historical average. Gold now trades at $2,000/oz and platinum 1.2 times that at $2,400. The ten gold ounces you sold would be worth $20,000. The 12 platinum ounces you bought are now worth $28,800. Thus, trading the platinum to gold ratio boosted your precious metals wealth by 44%!

This hypothetical should not be interpreted as a prediction of future price outcomes. It’s merely an illustration of one type of scenario that could play out.