Still Waiting for a Precious Metals "Correction"? Get Off the Dime and Buy Some Silver Ones...

Over time, charts for a bull market tend to print higher highs and higher lows on the way to the primary top. Two steps forward, one step back, creating a visual stair-step effect. 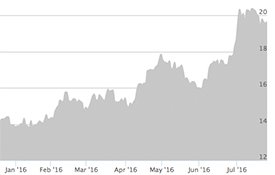 This chart "picture" has been in evidence for gold, silver, and the miners since January.

So far, waiting hasn't been a good strategy. Yes, there were a couple of times in April, and a month later in late May where you might have been able to buy and save some money. But things can get in the way of that plan. And for a number of people I've talked to, things apparently did.

The first obstacle is Timing: Away from your computer, on a trip, sick, or depressed? Whoops, you missed the "correction."

Price volatility tends to cause a surge in premiums. Over the last few years, when silver dropped sharply, premiums rose because demand surged. Now the same thing's happening when prices rise sharply! So, even if silver declines to your target, you may still have to pay more than when the spot price was higher!

Then there's a matter of the "experts" and the "gurus." As a veteran of these markets since the 1970's, I can tell you unequivocally that the way the metals and miners have surged this year, and the amount of time it took them to do it, is nothing short of amazing. In fact, "amazing" could be the operative word we keep using as the rest of this year... and next year unfolds. Fortunately for new buyers and current stackers, prices have not staged a runaway move and availability is good... so far.

But to hear the "experts" tell it, and I read just about everything they have to say – the market has become too "overbought," the charts are showing "double tops," "historically high COTs," etc.

They've had their subscribers in and out, or are still out, waiting for that "correction."

Yes, we may soon see the kind of "pullback" the Cassandras have been predicting. How long it will last, how deep it will go, I cannot say.

But I do know that for most of the procrastinators, it won't go low enough or last long enough for them to actually get off the dime and do something.

Stuart Thomson of Graceland Updates likes to say that "If you're trading through a microscope, your profits will be... microscopic." Which reminds me of what so many of the gurus have been saying this year. They're all "long-term bullish, but short-term bearish." If this market is headed anyways near where the tea leaves are suggesting, this kind of thinking is going to leave a lot of people who are waiting to own precious metals... long-term empty-handed!

Truth be told, the biggest impediment to taking action, is human nature. Let's say you're patient and declare, "When silver hits 'x'$, I'll 'back up the truck." Maybe at some point over weeks and months the price declines to your "buy point."

All of a sudden, everything you read is negative. "Demand is down in China." "Poor harvests in India mean less silver will be imported." "The Federal Reserve says it's going to raise interest rates." "The Maestro, Alan Greenspan, is now bearish on gold." Yada, yada. You start thinking, "Maybe I should wait until it drops even more..." But, after a while, the price starts moving back up, and you're still waiting. 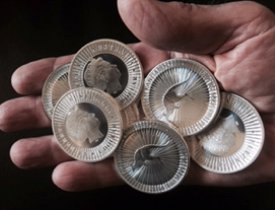 Eventually you find yourself in one of two (still waiting) camps. Either you miss the entire bull market – as the Wall Street pros did from 2000-2011, telling their clients that "gold is too risky" for 11 consecutive years, during which the price rose over 600%! Or, at much higher levels you panic and jump in with both feet – just before a big "correction." All of this effort for the privilege of waiting some more and finally selling out at a big loss.

David Morgan straight-forwardly addresses this conundrum. If you're still a fence-sitter about "going long and strong" with precious metals, you might want to reflect on his wisdom:

"The problem with a lot of people is that they have an amateur's perspective – which means they think that if they didn't get in at the low, they've missed the move. Actually the best traders and the wealthiest people on the planet just take out the middle....They (will) get in and make massive amounts of money from the market as silver goes up to a hundred. They know what they're doing; they're not trading in hindsight." (Or staying out, because they "missed the bottom.")

There Is Still Good News for You

So where's the good news in all of this for you? First, physical metals have not risen nearly as much, proportionately, as have the underlying mining stocks. Indeed the miners are simply playing catch up, rising faster than gold and silver – as they should, because owning them comes with more risk.

Second, the general public still has not placed precious metals on their "must have" list. Sure you hear radio advertisements to buy, but how many of your neighbors, friends, and family members hold any? I'm willing to bet the answer is very few – or none!

If this overview makes sense to you, then get off the dime and exchange those base metal slugs in your pocket, along with some paper promises, for real money that has the "ring" of truth when you click two pieces together. Acquire your stockpile in thirds, every 30 days.

After that, order a copy of Bob Moriarty's little investment gem, Nobody Knows Anything - Learn to Ignore the Experts, the Gurus and other Fools It's the best way I know of to stay relaxed, avoid waiting for scripted corrections, and keep from being long-term empty-handed.

Disclaimer: I own a copy of Bob Moriarty's book.