Important Questions Answered: Why You Need Bullion for Preparedness 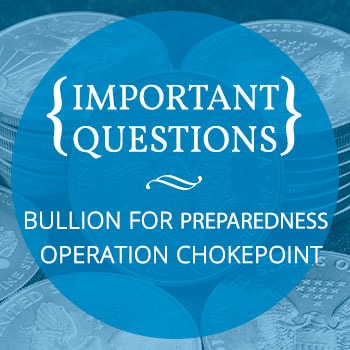 We get great questions from our customers and from folks who listen to our podcasts or read some of our commentary and analysis as it gets picked up around the web. From time to time we share the best and most common of these questions and our answers.

Perhaps the best part of operating in this industry is the chance we get to engage with people who are plugged into some of the most important issues of our time. Enjoy!

Question: Money Metals talks about holding physical bullion as part of a preparedness plan. I don’t understand how having some gold or silver will be useful in a crisis. In a world where people are just trying to cover their basic needs -- food, water, and shelter -- how is holding some very expensive shiny metal going to be helpful?

Answer: Along about the time humans figured out how to grow food and use wheels, they invented money. All three innovations played a big role in advancing the standard of living. People began producing an excess, hauling it to town, and forming markets. But while no one expects civilization to abandon agriculture or the wheel, there are some who expect people to give up on money in a crisis.

They won’t. Money is extraordinarily useful -- just like the wheel. People won’t do without it.

They won’t resign themselves to living as if money had not been created. People won’t choose to go without trade and become totally self sufficient. Nor will they choose a strict barter system which requires them to find trading partners that a) want what they have and b) have what they want.

Gold and silver have been working as money for roughly as long as the wheel has been used in transportation -- including periods of government collapse, black plagues, and other crises of all sorts. These metals are almost universally recognized as money. And money is an essential innovation that is with us to stay. For more on this subject, read this.

Question: I haven’t heard much about Operation Chokepoint lately. Is that initiative ongoing and are you seeing any impact?

Answer: Yes, Operation Chokepoint continues, and we think it is very likely impacting our industry.

We’ll elaborate first by explaining Operation Chokepoint. The U.S. Justice department announced the program in 2013. The Obama DOJ’s stated intent is to dissuade fraud and money laundering by ratcheting up scrutiny on banks and financial services providers who have clients in certain “high risk” businesses.

Targeted industries include precious metals and guns and ammunition, but there are many others. Unelected bureaucrats developed a list of businesses they deem suspicious. But since investigating and prosecuting actual fraud or money laundering is difficult, their approach is an end run around due process by cutting off access to banking.

Operation Chokepoint is designed to “choke” businesses by pressuring banks to stop accepting customers in businesses that officials don’t like. Banks and financial services providers such as PayPal face additional scrutiny, regulation, and penalties for keeping clients who are considered high risk. 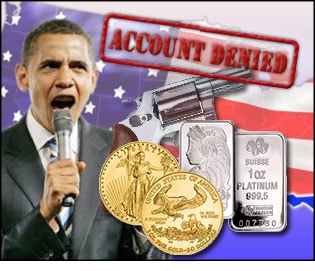 Michael Bresnick served as executive director of the Financial Fraud Enforcement Task Force when it created Operation Chokepoint. He has since left for a job in the private sector. He wrote in April for American Banker and confirmed, “Members of the industry (financial institutions) have raised their hands in frustration and simply avoided lines of business typically associated with higher risk.”

We believe Operation Chokepoint is behind a recent decision by PayPal to suspend services to many in our industry. We are aware of Paypal accounts that have been placed on hold for months without explanation. Others have been permanently closed with no opportunity for appeal or recourse. Of course, Paypal has been a left-wing activist and can be expected to toe the Big Government line.

In our own dealings with Paypal, we have long found it to be a very poorly run business (poor service and communication, an unhelpful fraud department, and outdated technical resources) compared to other processors who also had lower costs, and we have now discontinued offering Paypal as a payment option.

But Operation Chokepoint is just another front in the broader war on cash. Bureaucrats and bankers aren’t going to be happy until every transaction is conducted “on the grid” and therefore subject to scrutiny and regulation. That should concern all of us.