The one thing silver investors want to know, is when will the manipulation of the silver price finally end. And who can blame them. It becomes extremely frustrating to watch the silver price fade lower and lower, especially as the Dow Jones Index gets ready to surpass the 20,000 level.

Furthermore, precious metals sentiment continues to head down the toilet and into the cesspool, while the financial networks like CNBC get ready to pass out “Go 25,000 Dow Jones”baseball caps. However, the broader markets are in serious trouble, pointed out by Wolf Richter’s article, What The Heck’s Happening To Our Share Buyback Boom. In that article he posted this chart and stated the following: 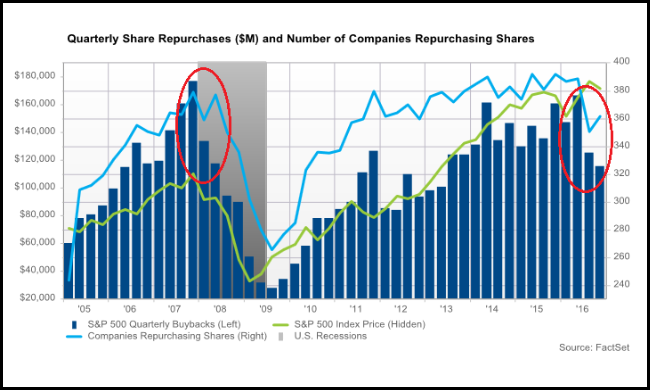 Share buybacks in the third quarter plunged 28% year-over-year, to $115.6 billion, the biggest year-over-year dive since Q3 2009, according to FactSet. It was the second quarter in a row of declines, from the glorious Q1 this year, when buybacks had reached $168 billion, behind only Q3 2007 before it all came apart.

So, it looks as if the Dow Jones Index is most certainly well beyond BUBBLE TERRITORY. Of course, this won’t stop those with “Sugar Plums Dancing In The Heads & Dollar Signs In The Eyeballs” from jumping onto the runaway stock market train-wreck.

This is a horrible failure of the human psyche. Instead of an individual becoming more cautious, prudent and steadfast when markets are behaving completely insane, we find quite the opposite as greed and avarice increase the severity of the BRAIN DAMAGED investor.

That being said, the best we can do when the fan finally hits the cow excrement, is not to tell our friends, associates and loved ones who didn’t listen, “I TOLD YOU SO.” Best to keep our big mouth shut. However, I don’t see a problem with wearing a T-Shirt that has “THANK GOD PRECIOUS METALS SAVED MY AZZ” printed on it. Nothing wrong with being respectful, but also subtle.

Alright, let’s get to some of the Forensic Evidence on why silver price manipulation will end.

To Make Sense Of Silver Price Manipulation, You Have To Understand The True Fundamentals

Even though Deutsche Bank finally came out and provided evidence that they have been manipulating the silver market, this didn’t do much to change the falling price trend. Ironically, after Zerohedge published the Deutsche Bank Silver Manipulation article on December 8th, the price of silver fell another 8%.

I would imagine this must have done wonders for already disenchanted silver investor. Which is why I decided to write this article. Even though the present downturn in the paper silver price can be quite frustrating to many investors, SILVER’S REAL VALUE is totally misunderstood by the market.

To understand how the silver price is being manipulated, we have to first understand the silver pricing mechanism. To explain this, I decided to use one of the largest primary silver mining companies in the industry, Pan American Silver.

Unfortunately, the majority of the market still believes that “Supply & Demand” are the leading drivers of price. They aren’t. While I used to believe in this economic theory, I no longer do. I have made the case for this in several of my past articles, but I will show it again using Pan American Silver as another example

I have updated my chart below to show Pan American Silver’s “Estimated Break-even” from 2004 to 2016: 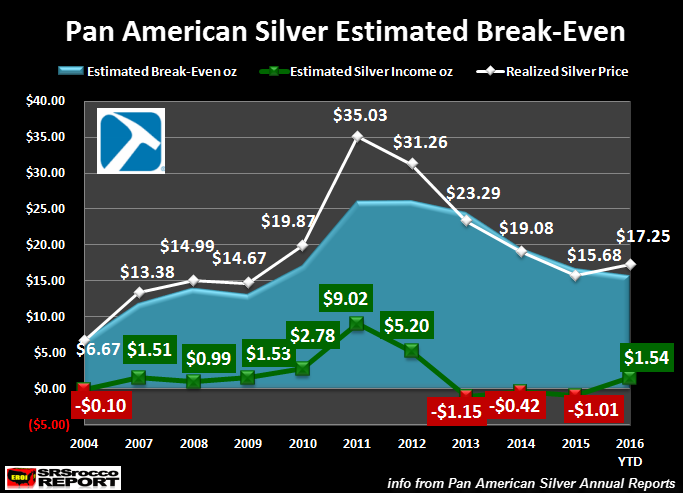 This chart may seem a bit complicated, but it’s not. The top of the BLUE AREA is Pan American Silver’s estimated break-even, the WHITE LINE represents the realized annual silver price and the GREEN or RED figures show the estimated profit or loss per ounce each year.

To get an idea of the growth and financial change at Pan American Silver since 2004, I put together the table below: 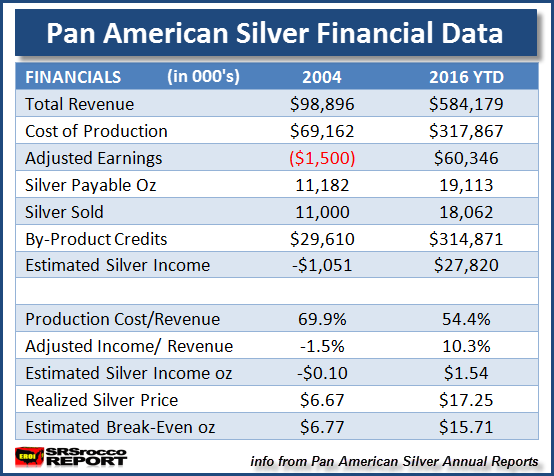 If we look at Pan American Silver’s statistics over a ten-year period, they provide more interesting evidence: 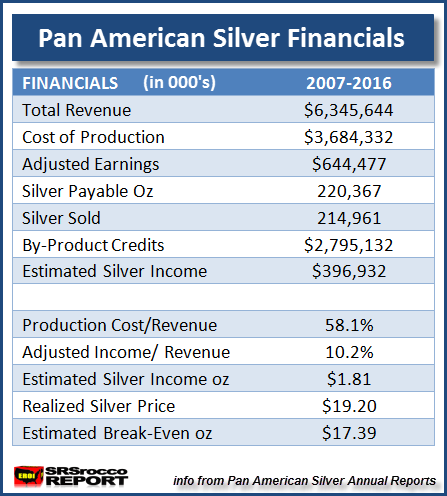 When mining companies calculate their “Cash Cost” or their “All-In Sustaining Cost”, they deduct their by-product credits. As we can see, Pan American Silver reported $2.7 billion in by-product credits for this ten-year period. Basically, they are artificially lowering their real cost to produce silver by deducting these by-product credits.

Which means, Pan American Silver’s by-product credits weren’t really credits when the company needed them to stay profitable. A CREDIT is only a CREDIT when you don’t need the damn thing to be profitable. That is why I show an estimated “Silver Income” of $396.9 million or $1.81 average silver profit per ounce for the entire 2007-2016 YTD period. Which means, part of Pan American Silver’s $664 million in Adjusted Earnings came from their gold, zinc, lead and copper sales.

Regardless, if we realize that Pan American Silver only made a 10% margin of profit ($664 Adjusted Earnings on $6.3 billion Total Revenues) during that ten-year period, that isn’t much money considering the 220 Moz of total silver production. 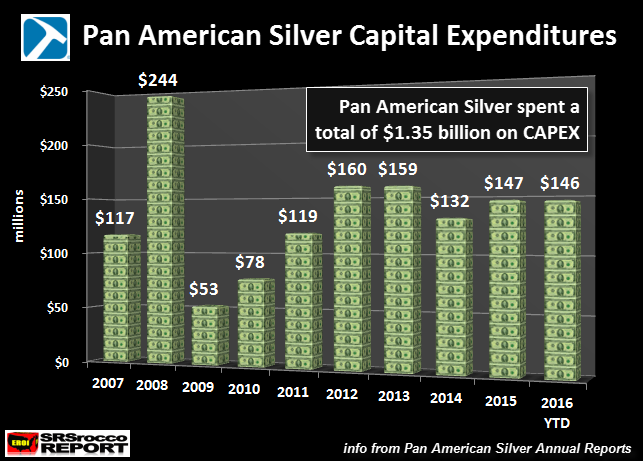 You see, the financial statements reports don’t include how much money they are paying out to maintain, upgrade or add new projects. This is listed in their “Cash Flow Statement.” To get a real idea of their true profitability, we have to look at Pan American Silver’s Free Cash Flow. 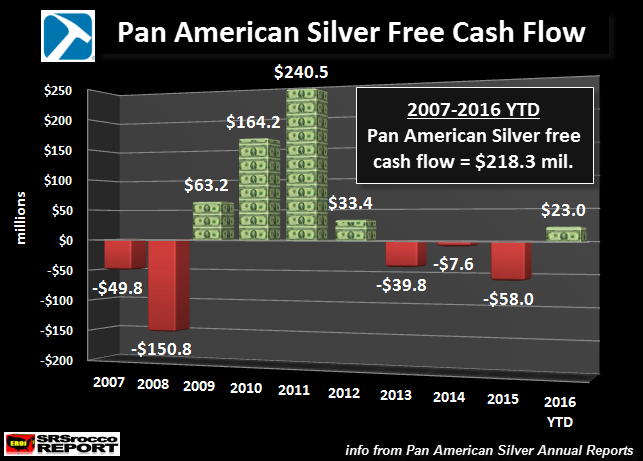 The net value of Pan American Silver’s free cash flow from 2007 to 2016 was $218.3 million. So, even though they stated they made $644 million in Adjusted Earnings during this period, their true profit was $218 million.

But not so fast We also have to consider the dividends Pan American Silver paid to its shareholders. According to Pan American Silver’s Annual Reports, they paid a total of $247 million in dividends from 2007-2016. If we include their dividend payouts, this is a more realistic picture of their profitability: 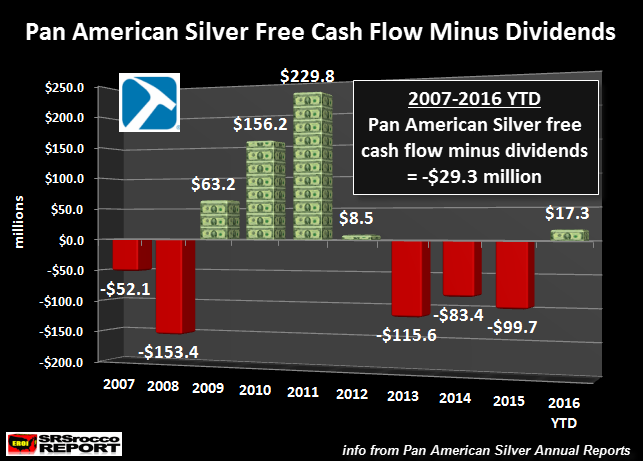 By deducting dividends from Pan American Silver’s free cash flow, we find they suffered a net loss of $29.3 billion for the ten-year period. Of course, this does not include their investments or other items, but it gives us a good ball-park figure of their operating profitability.

However, this proves that one of the largest primary silver mining companies in the world made very little in the way of profits producing silver since 2009… and this was during the really good years including the huge price spike to $49 in 2011.

As I have mentioned before, the price of silver has been based on the cost of energy. Here is a chart of Pan American Silver’s estimated break-even price and the Brent Crude Oil average annual price: 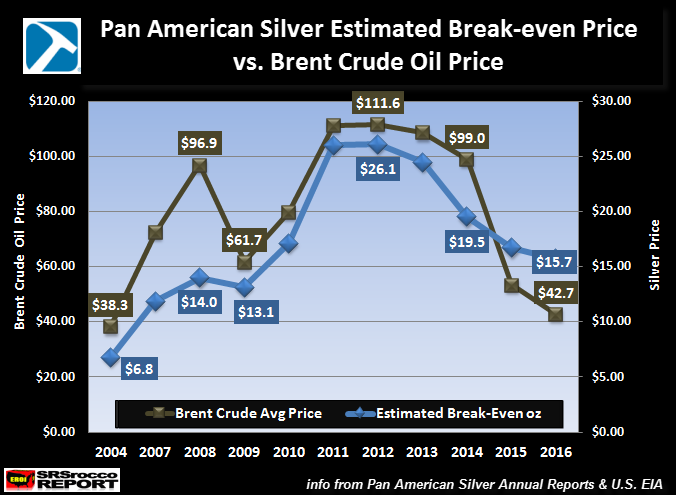 Here we can see that Pan American Silver’s estimated break-even trend line (BLUE LINE) paralleled the Brent Crude Oil price. However, the cost to produce silver will continue to increase even though the oil price may be lower. This is due to the falling ore grades and the increased cost to extract, transport and process larger amounts of ore to produce the same amount of silver.

Now that I have given you the evidence showing that the price of silver is based more on its cost of production than supply and demand forces, why will the silver price manipulation end?

Understanding Why The Silver Price Manipulation Will End

There are two ways to value silver. One is based on its “commodity priced mechanism” and the other is due to its “high quality store of value.” I already explained how silver is valued using Pan American Silver as an example. If I added many of the other primary silver mining companies, we would see a range of estimated break-even prices in the $15-$17 range for 2016 (some maybe even lower such as Tahoe Resources, but they are an exception).

So, the Fed and Central Banks, using their member banks for trading purposes, make sure the price of silver does not fall too low below its cost of production. This is why it is impossible for these member banks to push the price “WHERE EVER” they like, claimed by some in the precious metals community. There is some method to the silver market rigging madness.

If the price of silver was pushed too far below its cost of production, traders would come in by the droves. Thus, taking advantage of a low market price situation that wouldn’t last.

That being said, silver is also valued another way… as a HIGH QUALITY STORE OF VALUE. Very few assets contain this ability. Gold is another. While silver is consumed and used in industry, it is also the number one invested precious metal in the world, if we go by ounces: 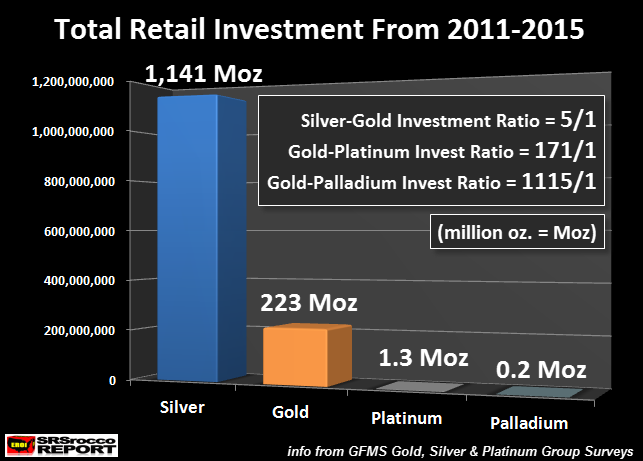 In just the last five years 2011-2015, investors purchased 1.14 billion oz of silver versus 223 million oz of gold. As we can see, Platinum and Palladium physical investments are nothing more than rounding errors compared to gold and silver.

The reason silver is valued differently than just a mere commodity, is that it contains stored ECONOMIC ENERGY. Someone else has to provide either labor, goods or services to equal the value in the silver coin or bar. Physical silver investment is also much different from the majority of assets out there, such as Stocks, Bonds & Real Estate:

The Fed and Central Banks have thrown in tens of trillions of Dollars worth of liquidity since 2008 to prop up these assets. Even though we had a short collapse of these asset values during the 2008-2009 downturn, they are back up in record territory.

BIG DIFFERENCE, most in the markets fail to understand.

To understand why U.S. and world oil production is in BIG TROUBLE, please read my article, THE COMING BREAKDOWN OF U.S. & GLOBAL MARKETS EXPLAINED… What Most Analysts Miss.

While the Fed and Central Banks can control the price of silver (or gold) based on their cost of production, they will not be able to do so when the Greatest Financial & Economic Ponzi Scheme finally implodes. Thus, the value of gold and silver will rise to very high levels as they are finally valued as STORES OF WEALTH, rather than MERE COMMODITIES.

And it will actually be much more explosive due to the fact there is very little in the way of physical gold and silver in the world. Unfortunately, most investors continue to pile into the TURBO-DRIVEN HIGHLY-INFLATED STOCK MARKET. The resulting crash and collapse will be far worse than 2008-2009.