The Inflationary Implications of the Trump Economy 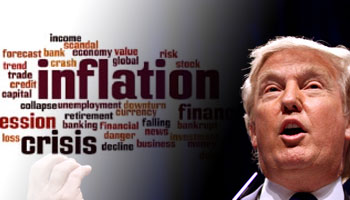 Something is brewing in the economy. Since the election of Donald Trump, interest rates have spiked, copper prices have surged, and various sectors of the stock market have swung bigly on speculation of what “Trumponomics” will bring.

Scores of triumphant Republican commentators are already painting a bullish picture of the Trump economy. The GOP – which will control the White House, Congress, and most state governments – has a rare opportunity to implement a pro-growth agenda.

Republicans squandered their last great window of opportunity. George W. Bush and his Congressional allies grew government spending at a faster clip than the economy and saddled the country with trillions of dollars in new debt.

It’s too early to tell whether Republicans will finally get serious about fiscal responsibility. No one knows exactly how Donald Trump will govern or how the economy will perform under his presidency. But one trend that is now being signaled by markets is a pick up in inflation.

Bonds and Base Metals Are Signaling Future Inflation

The yield on the benchmark 10-year Treasury note spiked from 1.9% on Election Day to as high as 2.5% by Christmas. For the bond market to move that far that fast is unusual. In fact, it was the sharpest yield surge in 15 years.

What may be worrying the bond market is the potential for the government’s borrowing needs to grow under the Trump presidency. Rising debt means rising credit risk and inflation risk, which means higher bond yields.

The president-elect proposes a combination of tax cuts and spending increases that could swell the deficit. The Committee for a Responsible Federal Budget claims that Trumponomics will add $5.3 trillion to the federal debt over 10 years.

Of course, Trump disputes that figure. He says that faster rates of economic growth will add to federal revenues and pay for the tax cuts. It’s possible. But you have to be a committed optimist to believe the deficits won’t grow at all over the next four years.

At the core of Trump’s domestic spending agenda is an ambitious infrastructure program. Stocks related to building and construction have boomed since Trump’s election win. So have the prices of copper and palladium. These economically sensitive industrial metals moved in the opposite direction of gold and silver post-election.

Inflationary and Deflationary Forces Competing with Each Other

Are rising base metals indicating rising inflation dead ahead? Or does the recent slump in gold prices suggest disinflationary pressures to come?

Let’s take a step back and consider the larger trends. Gold and silver prices still show positive gains for 2016. The recent selloff occurred as a result of a rising U.S. Dollar Index and investor optimism on the prospects for the Trump economy. Base metals tend to benefit from optimism, while precious metals tend to thrive more on pessimism.

The early stage of a rising inflationary trend tends to be associated with positive things such as rising demand for raw materials, new job creation, and increased economic output. Only later do concerns over rising price levels and rising interest rates cause investors to react fearfully and seek the protection of precious metals.

Gold and silver would also be expected to perform well when economic indicators start turning down and investors seek safe havens from cyclical assets.

If a recession starts in the months ahead, it’s unlikely that Donald Trump would be the sort of president who takes a hands-off approach and lets the economic downturn run its course. After all, he made bold promises to the effect of being “the greatest jobs president that God ever created.”

If his grandiose job growth touts don’t materialize through the free market, expect President Trump to try to generate jobs by other means. He’ll go to Congress for new stimulus measures. He might instruct government agencies to embark on new spending and hiring spree. He could even pressure the Federal Reserve to better fulfill its “full employment” mandate by pumping out more cash into the economy.

Then there’s Trump’s trade policies. He vows to pull the U.S. out of the Trans-Pacific Partnership and raise new import tariffs. Those tariffs could well help protect U.S. manufacturing jobs. But they will also make imported goods more expensive for U.S. consumers.

Some worry the forthcoming Trump administration could pursue a high-stakes trade and currency war with China and other major exporters. Trump has repeatedly accused Beijing of being a currency manipulator. He has said in so many words that he favors a weaker dollar to make U.S.-produced products more competitive in the international marketplace.

A weaker dollar tends to exert inflationary pressures in the economy. So far, however, the post-election trend in the dollar versus foreign currencies is up. The dollar can gain against other fiat currencies while still losing value against hard assets.

But gold bugs and “Trumpflation” forecasters will be looking for the dollar index to reverse course and confirm the other signals markets are giving for rising inflation during the Trump years ahead.