The U.S. Empire Would Have Collapsed Decades Ago If It Didn’t Abandon The Gold Standard

The U.S. will never go back on a gold standard. The notion that a U.S. Dollar backed by gold would solve our financial problems is pure folly. Why? Because, if the U.S. Empire didn’t abandon the gold standard in 1971, it would have collapsed decades ago.

Unfortunately, some of the top experts in the precious metals community continue to suggest that revaluing gold much higher, to say…. $15,000-$50,000 an ounce, would bring confidence back into the Dollar. Not only will this not happen, it wouldn’t save the Dollar even if it did.

Why? Well, that is the $10.5 trillion question, isn’t it? I provided that exact $10.5 trillion figure for good reason… which I will get to shortly, but the innate value of the U.S. Dollar died decades ago and will never come back. Basically, it is a DEAD MAN WALKING.

However, the market hasn’t figured that out yet, but it will. It is just a matter of time, and time is running out.

Hugo Salinas Price Was The Motivation For Writing This Article

When a trend has been firmly in place in the world for 45 years, a reversal of that trend must be the result of a profound change which will produce a new trend that will not be easily altered, just as the previous trend was unalterable for 45 years. The new trend is deflation, contraction of credit.

According to my analysis in a recent article, The Implosion Of The Global Markets Has Started & Can’t Be Stopped, the reason the International Reserves peaked and declined, was due to the price of oil falling below $100 in August 2014 and then crashing to $30 by the beginning of 2016: 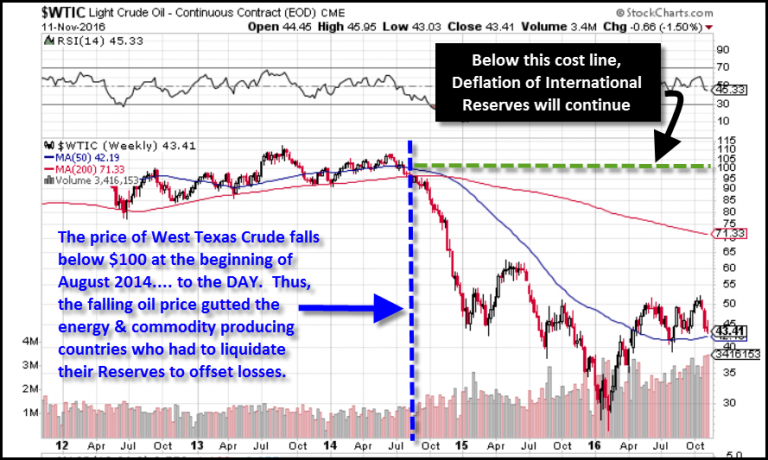 As we can see in the chart, when the price of oil fell below $100, it gutted the oil and goods producing countries economies. Thus, these countries had to sell off their Reserves (U.S. Treasuries and etc) to offset the losses from a collapsing oil price. Indeed, this was the very DEFLATION Hugo Salinas Price stated in his article.

Since that article, Hugo and I have had several email exchanges. In one of our exchanges, he brought to my attention the amount of gold the U.S. would have had to liquidate just to import one million barrels of oil per day. Looking at his calculations, it turned out to be one hell of a lot of gold.

So, I decided to look into this in more detail to get a better idea of HOW MUCH GOLD would have been liquidated and sold into the market to support the U.S. Empire’s insatiable oil consumption.

Let me tell you, it’s a great deal more than I ever imagined.

The Total Dollar Amount Of U.S. Net Oil Imports Was Quite Large 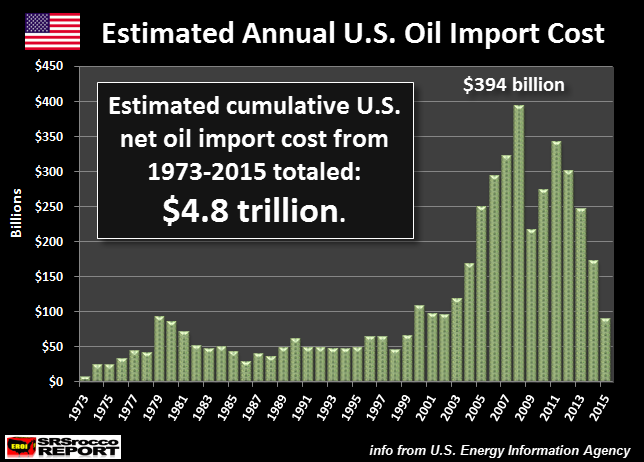 The figures in this chart were calculated by taking the annual average daily net oil imports, multiplying it by the average Brent Crude oil price and then by 365 days per year. For example, the U.S. spent a record $394 billion on its net oil imports in 2008:

While this may not seem like a lot when we compare it to our highly inflated Gross Domestic Product (GDP) of $14.2 trillion in 2008, it turns out to be one heck of a lot of gold when we consider it in respect to our balance of trade deficits.

But, before we get into that, let’s look at a chart of annual U.S. net oil imports since 1973: 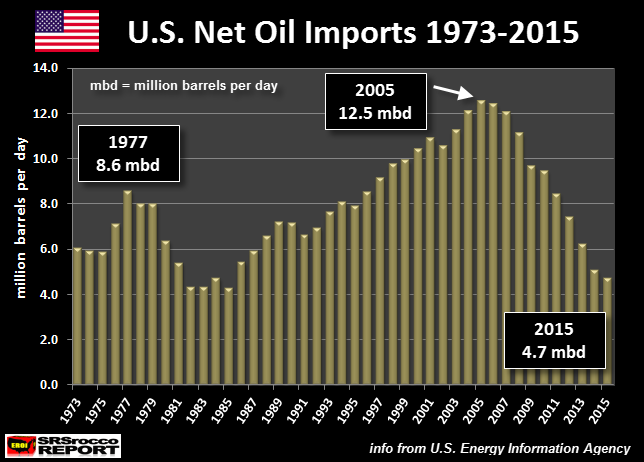 Furthermore, U.S. net oil imports totaled 124 billion barrels from 1973 to 2015. Again, the total Dollar amount of these net oil imports during that time period was $4.8 trillion. Even thought that figure may not even raise an eyebrow today, if we consider what it means in “Gold terms”, it’s off the charts.

If we look at the data provided by the United States Geological Survey (USGS), total global gold holdings were 171,300 metric tons in 2011: 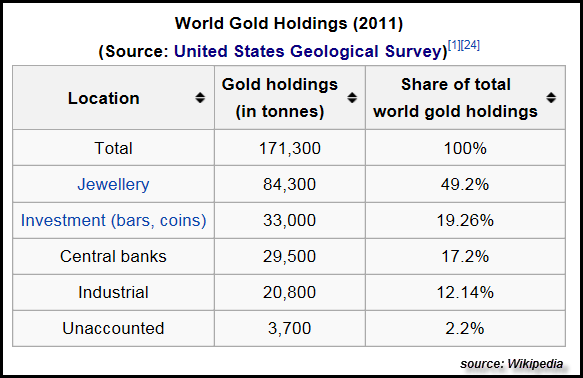 Yes, this is just an estimate of all known world gold holdings. While some readers may believe there are more like 1-2 million metric tons of gold in the world, due to the work of several precious metals analysts... I DON’T BUY IT. Why? Because the facts provide the real answer when we look at cumulative gold production since 1493: 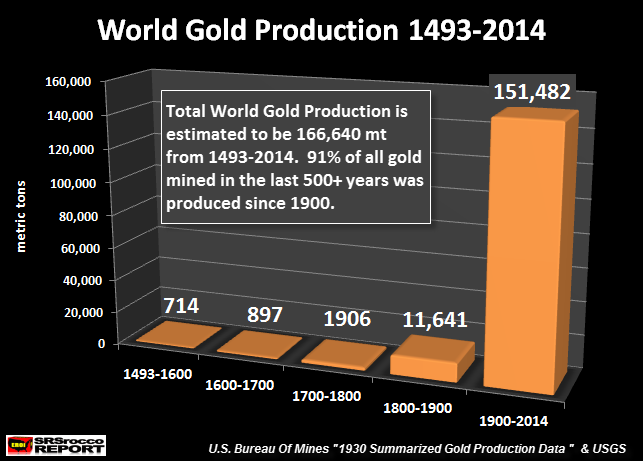 Even though this stirs up fanciful “conspiracy theories” such as Yamashita’s massive gold treasure as well as the supposed hidden Nazi gold hoard, the world cannot hold more gold than it could produce. Well, maybe it could if we had the help of Aliens from distant planets. While some readers may actually believe Aliens would come down here and mine gold for us, logic suggests that they would likely have much more important things to do with their time.

Unfortunately, even though logic can easily destroy lousy conspiracy theories, folks continue to believe them as fact, regardless. When I get into a logical debate with someone who continues to believe in a lousy conspiracy, I shut up, because there is no use in going further. While conspiracies do take place in this crazy world of ours, not everything is a conspiracy.

That being said, let’s look at how much gold the United States would have had to liquidate to pay for its net oil imports. 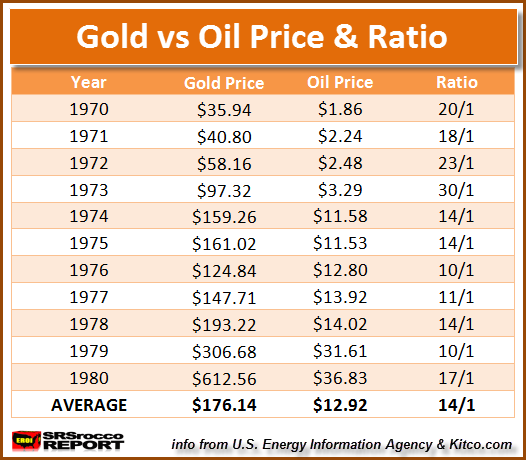 The table displays the gold price, oil price and the ratio on the right. If we average the Gold-Oil price ratio for the 1970’s decade, we can see that one ounce of gold could purchase 14 barrels of oil.

This is precisely the reason President Nixon had to abandon the convertibility of the U.S. Dollar into gold. While there are more factors to consider in the dropping of the Gold-Dollar Peg in 1971, oil was a leading cause.

Okay... I can hear it now from some readers. Yes, it is true that the United States took this oil and created goods or services that they exported. So, it makes some sense that not all of of our net oil imports would consume 279.500 metric tons of gold. However, when we look at additional information... the situation is even worse.

The U.S. Cumulative Net Trade Deficit Since 1973 Was Far Worse Than Our Oil Import Cost

To make those who “doubt” the figures above, I decided to research the U.S. balance of trade since 1960. When I added up the total net trade deficits, I was more surprised than the figure of the net oil import cost.

This chart below represents the annual U.S. Balance Of Trade in Goods & Services since 1960: 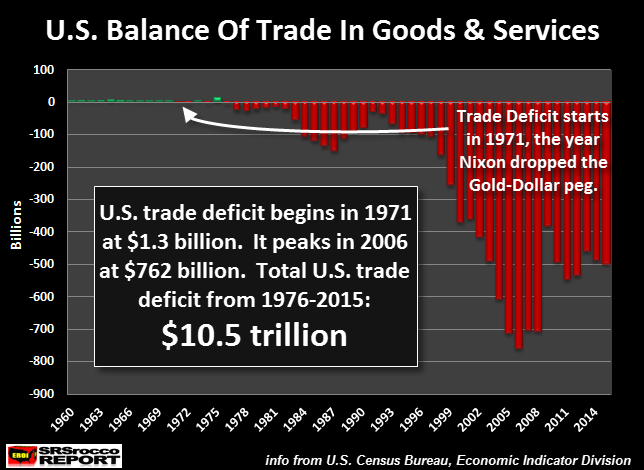 Looking at the top left-hand part of the chart, you will notice the tiny green smudges on the chart. These represent the U.S. trade surpluses. Here are a few of the annual trade surpluses (and deficits) during the 1960’s and early 1970’s:

You will notice the trade surpluses were quite tiny compared to the deficits, especially after 2000. If we add up all the U.S. annual trade deficits from 1976 to 2015, it totaled an amazing $10.5 trillion. Basically, the U.S. Empire was able to bamboozle the world by exchanging worthless U.S. Dollars or Treasuries for energy or real goods and services.

Does anyone actually believe the U.S. is going to make good on its $10.5 trillion in trade deficits. I am making an assumption here (as I have not taken the time to look at the data), but I image the $11 trillion of International Reserves shown in Hugo Salinas Price’s chart above, are mostly accumulated IOU’s from the U.S. Empire.

According to this article on Global Currency Reserves, the U.S. Dollar comprised 63% (in green) of the $11.6 trillion total as of the second half of 2014: 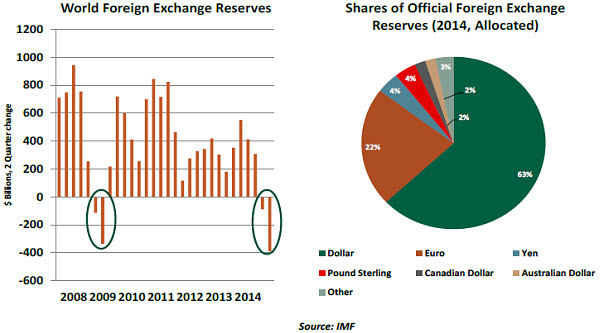 The U.S. Empire Would Have Collapsed Decades Ago If It Didn’t Drop The U.S. Gold Standard

As I stated in the beginning of the article, the U.S. Empire would have been TOAST decades ago if it didn’t drop the Dollar-Gold peg. In order for the United States to continue spreading its SUBURBAN LEECH & SPEND ECONOMY, it desperately needed to come up with a better way to do business than to fork over the rest of its 8,100 metric tons of gold reserves.

Actually, according to the data, U.S. net oil imports that averaged 8 million barrels per day during that 40+ year period, would have liquidated approximately 6,500 metric tons of gold a year. Here is that table again:

Which means, the U.S. Government had to drop the gold standard, or it would have gone the way of present-day Venezuela decades ago. That may seem like a stretch to some readers, but keeping the world believing in the “ALMIGHTY U.S. DOLLAR” is job number one for the U.S. Treasury and government.

Now, I am not trying to be harsh against the U.S. government for its U.S. DOLLAR DIPLOMACY POLICIES… I am just stating the facts as I see them. When we look at the data and figures presented in this article, it is clear to see how vital it was for the United States to continue importing oil, without the cost in REAL MONEY… GOLD.

Again, the only way the U.S. Empire could continue business as usual, was to exchange worthless FIAT DOLLAR IOU’s for oil, rather than fork over gold that it didn’t have.

Especially, when the figures show that the U.S. Empire needed 279,500 metric tons of gold just to pay for its net oil imports. This turned out to be 100,000 metric tons more gold than the world holds.

This is why the Federal Reserve and Central Banks continue to manipulate the paper price of gold. Why? Because, the day the MUSIC FINALLY STOPS, the world will realize there is only one gold chair for the 100 people holding paper IOU’s.