According to historical official records, the price of gold should be 20 times higher than the current market price. While many precious metals investors have heard about the revaluation of gold to back the outstanding fiat currency, my analysis focuses on monetary gold stocks versus global GDP (Gross Domestic Product).

To understand how the global GDP versus monetary gold stocks has changed, we need to look at information and data published in the U.S. Bureau Of Mines 1932-33 Gold-Silver Mineral Yearbook: 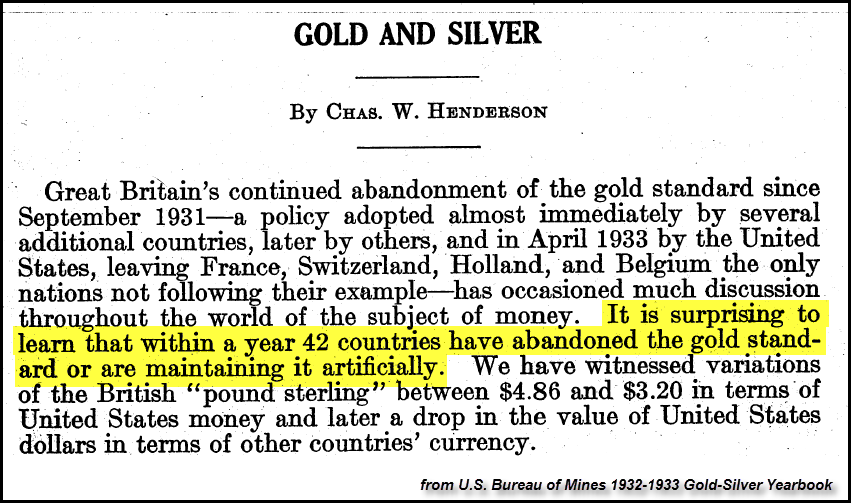 Thus, in all actuality, the world abandoned the gold standard in the early 1930’s, even though the United States Gold-backed Dollar became the world’s reserve currency via the Bretton Woods Agreement in 1944.

Now, the Central Banks and Financial elite had a very good reason to drop the gold standard. The financial and banking elite would profit immensely by printing money and charging interest, but only if money wasn’t gold or backed by gold. Because, the increase in above ground gold stocks was limited to its annual gold production. In addition, the industrial revolution had a profound impact on global economic growth.

In the past, international trade was mainly settled in gold or bills of exchange. However, global economic growth was surging as the industrial revolution was now being powered by coal and oil. These two energy sources enabled the world to increase economic growth at a massive scale and pace versus human and animal labor… which was the foundation of economic markets for thousands of years.

For example, a barrel of oil provides the equivalent of 23,200 man-hours of labor (source). If we divide it by the typical eight-hour work day, a barrel of oil equals the labor of 2,875 people. By taking that a step further, let’s look how daily U.S. oil consumption equates to human labor:

The United States consumes about 19 million barrels per day of oil. By multiplying 19 million barrels per day of oil by 2,875 people, that adds up to a staggering 54.6 billion people. Thus, the U.S. is utilizing the human labor equivalent of 54.6 billion people via its daily oil consumption. That is one hell of a lot of work when we consider the United States population is only 320 million.

Anyhow, you get the picture. I am still amazed at the lack of interest or ignorance of energy by the alternative community. If we remove OIL FROM THE EQUATION, then the entire world economy falls apart.

That being said, let’s look at the historical data that shows the gold price should be 20 times higher than its current market price today.

According to another excerpt from the U.S. Bureau Of Mines 1932-33 Gold-Silver Mineral Yearbook, global GDP in 1929 was $32 billion versus $11 billion in world monetary gold stock:

The last sentence at the end of the quoted text above states, “This expedient has not met expectations.” Basically what the analyst is saying is that “auxiliary mediums” of foreign bills of exchange, checks payable and day-today claims in foreign currencies were not enough to maintain trade and monetary expectations.

I took the data from text above and made the following chart to show the comparison of global GDP in 1929 versus total world monetary gold stocks: 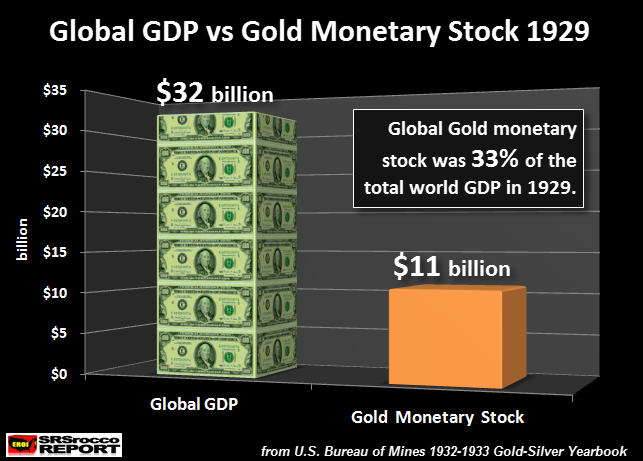 As we can see, the value of world monetary gold stocks of $11 billion was a third (33%) of the $32 billion of global GDP. So, for each dollar of monetary gold, the world economies produced three times the GDP. 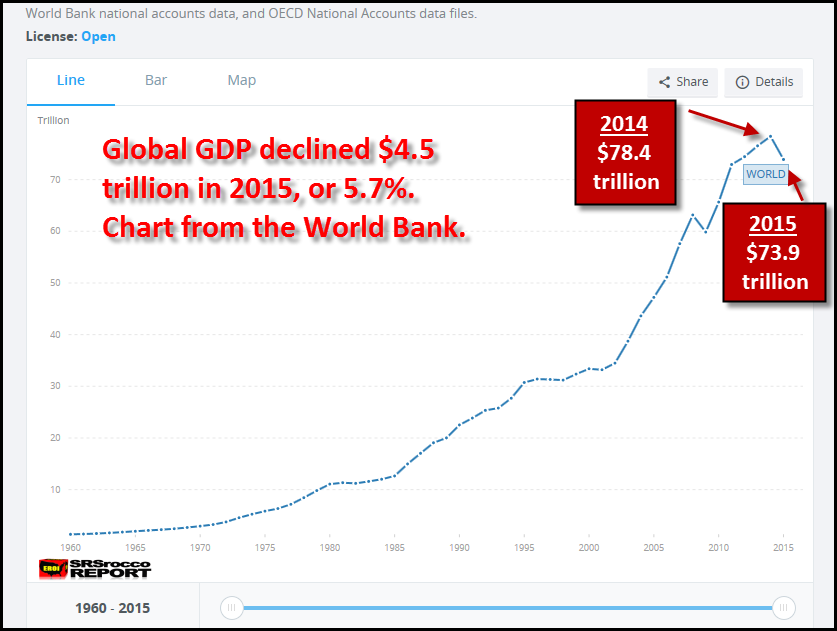 The huge 5.7% decline in global GDP in 2015 was worse than the 5.2% decline in 2009 during the U.S. and global financial meltdown. There was no financial disaster that took place last year, but global GDP declined 5.7%. Something FISHY this way blows.

Anyhow, if we compare the global GDP in 2015 to total world monetary stocks, this is the result: 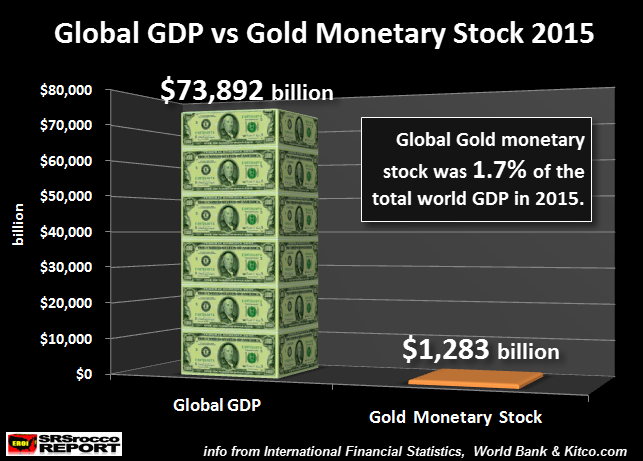 What a difference in 86 years... aye? Today, the value of world monetary gold stocks is only 1.7% ($1.28 trillion) compared to global GDP of $73.9 trillion. I calculated the value of present monetary gold stocks by multiplying the current 33,250 metric tons of official gold holdings by $1,200 an ounce. Of course, we don’t know the TRUE official gold holdings figure, but this at least provides us a guideline.

If we look at another quotation from the U.S. Bureau Of Mines 1932-33 Gold-Silver Mineral Yearbook, they provide the exact figure of world gold and silver monetary stocks for 1931:

Which means, the current gold price of $1,200 multiplied by 20 = $24,000 an ounce. Thus, the gold price would be $24,000 an ounce today if it were to equal the same ratio to global GDP in 1929. While it is true that the Western Central Banks publicly regard gold as a “Barbarous Relic”, privately they quite likely believe the opposite.

So, what does comparing monetary gold stocks to global GDP really mean? Well, let’s look at one more section from the 1932-33 Gold-Silver Minerals Yearbook:

Basically, money should be “a medium of exchange and a standard by which future obligations are determined.” Well, money today doesn’t perform this function any longer. If we just focus on the U.S. public debt, which is approaching $20 trillion, the supposed 8,100 metric tons of U.S. gold reserves at the current market price are only backing a fraction of that debt-obligations.

Most definitions of money are based on a medium of exchange or barter, but do not include “Future obligations.” This is a very important part of the equation that has been left out in the present valuation of gold (or silver).

The highlighted blue part of the excerpt above states that over history, various mediums of exchange or barter were eliminated leaving gold and silver as the key monetary metals. Why? Because they are the best substances that are durable, homogeneous, divisible, recognizable and easily transportable.

Which means, daily global oil production provides the world with 33 times the amount of human labor for each of the seven billion people on the planet. That is one hell of a lot of ENERGY SLAVES.

It has been the use of hundreds of billions of OIL ENERGY SLAVES that allowed world debt to grow to the current $230 trillion today. Unfortunately, the global oil industry is in big trouble as its rapidly falling net energy delivered to the market will destroy future global GDP.

When the collapse of the Global Oil Industry coincides with the disintegration of the highly leveraged debt-based fiat monetary system, world GOLD & SILVER STOCKS will behave as real money once again.

Thus, when the value of gold surges to the $20,000 or silver to $500-$1,000, precious metals investors will enjoy much better options than the 99% who have their wealth tied into extremely overvalued STOCKS, BONDS and REAL ESTATE.