The bullion markets offer their own commentary about conservatives’ state of mind since Donald Trump’s election. They are optimistic for the first time in years. Just look at the sales statistics from the U.S. Mint. Bullion. Coin sales have fallen sharply as investors see less reason to seek safe haven in the form of physical metal.

During Obama’s presidency, and during the campaign when it looked as if Hillary might succeed him, conservatives and libertarians aggressively bought American Eagle coins and other bullion products. The mint set new sales records nearly every year. 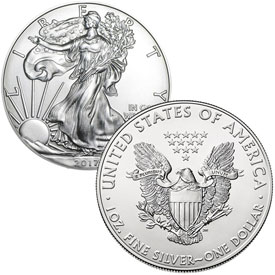 Retail Silver Eagle demand is down
even as silver prices have
rallied sharply since December.

Now one month of data from the mint certainly cannot be used to extrapolate longer term trends. Mint statistics often vary wildly from one month to the next. But it is safe to say retail bullion demand is down significantly, and the shift seems primarily driven by optimism surrounding the Trump economy.

There is little else to put investors at ease. The European Union remains in crisis. Geopolitical turmoil still dominates the Middle East. Federal debt and deficits look certain to persist.

The Rhetoric from the Federal Reserve Hasn’t Changed in Years

Officials there are still telegraphing “gradual” rate hikes with the caveat that rates will likely stay well below historical averages indefinitely.

The U.S. retail market is only a small part of global demand. And demand for the precious metals from financial market participants as well as well as Asian buyers continues to be relatively strong with prices rising sharply since December. But the recent dip in demand among American retail buyers may represent a final capitulation before the ferocious global bull market resumes.

Why? Because expectations surrounding Trump’s administration represent an extraordinarily high bar. Investors will discover the tectonic forces behind eruptions such as the 2008 financial crisis are still at work. They are beyond the ability of any president to control. Expectations will have to reset lower – perhaps a lot lower.

That may begin happening soon. Congressional Republicans aren’t fully jumping aboard when it comes to Trump’s reforms. They won’t even pass the same Obamacare repeal legislation they approved during the prior administration. Their actual commitment to ending the federal government’s most recent entitlement program is laid bare for all to see now that there is a president willing to support the repeal.

Meanwhile, Trump’s tax cuts are on the back burner while Congress decides on how to sell out the citizens who despise Obamacare – most of whom voted for Trump. Mitch McConnell, Paul Ryan and company will get around to disappointing the voters on tax reform in due time.

The same clowns will almost certainly pass another hike in the U.S. debt ceiling this month.

That issue made for good politics when Obama was president and Democrats controlled the Senate. Practically no one in Washington is genuinely interested in spending restraint.

The new Treasury Secretary – Goldman Sachs alum Steve Mnuchin – has taken the exact same stance as his predecessors. He is encouraging Congress to expand government borrowing capacity without delay.

The bankers, defense contractors, pharmaceutical companies and deep state insiders who have been calling the shots in Washington DC didn’t pack up and leave when Trump moved into the White House. Congress is still on their payroll.

It is only a matter of time before optimistic conservatives figure out just how badly they have been betrayed by Republican leadership.

In fairness, the country’s fiscal problems started way before the current crop of Representatives and Senators arrived in Washington. When the U.S. dollar’s last link to gold was severed in 1971, America veered down a one-way road toward national bankruptcy. Dishonest money financed the largest welfare/warfare state in world history.

No president will be able to dismantle it without the cooperation of Congress. We wish Trump good luck, but we'll believe it when we see it.