The Record Year The U.S. Imported Nearly A Half Billion Ounces Of Silver

How many precious metals investors know the year the United States imported a record amount of silver? This figure is so great, there is no other single year in U.S. history that comes anywhere close to this amount. Even more impressive than that, it turns out to be more than double the global annual mine supply that year. It is such an unbelievable amount, its record has never been surpassed to this day.

Actually, I was quite surprised by the data when I was researching through some old official records. Even though the United States currently imports a lot of silver to supply its growing jewelry, industrial and investment demand, it pales in comparison to the nearly half a billion ounces imported this record year.

However, if we look at the following chart, we can plainly see, it doesn’t remotely compare to the massive 473 Moz of silver imported by the United States in 1935: 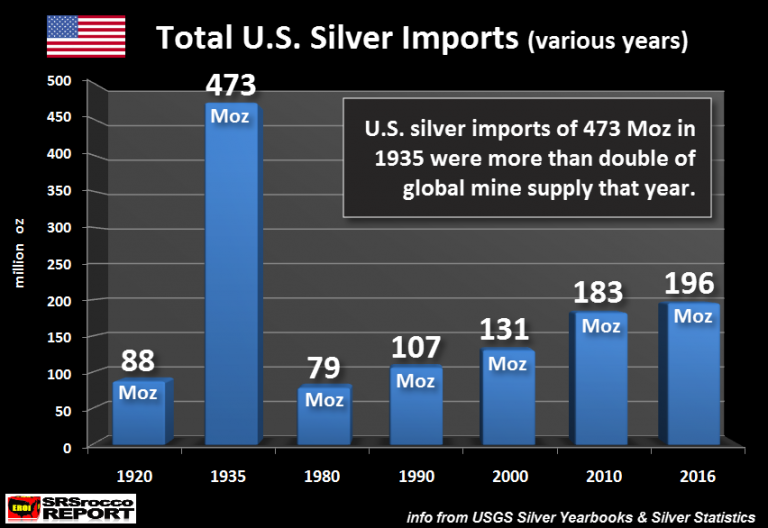 Well, due to the U.S. Silver Purchase Act of 1934, the U.S. Treasury went on a massive buying spree by jacking up the price of silver to $0.77 in 1935 from $0.44 in 1934. There is a lot that can be written about the U.S. 1934 Silver Purchase Act, but the motivation by the U.S. Government was to acquire more silver to back their outstanding currency base.

According to a paper written in 1936 titled, Effect Of The Silver Purchase Act Of 1934 On The United States, China, Mexico and India, it stated the following: 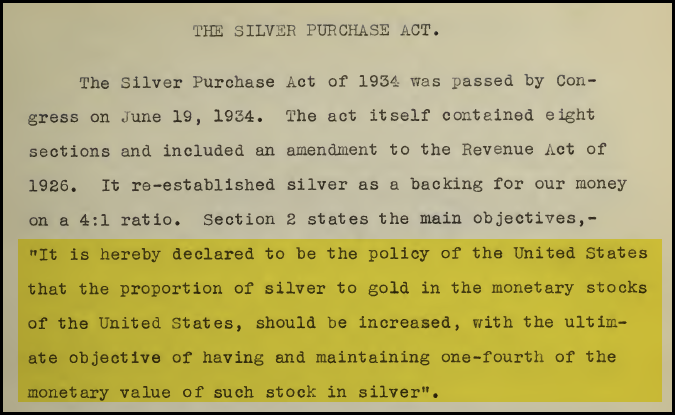 So, where did the United States import this amazing 473 Moz of silver in one year?? Well, if you guessed China, you are correct. Of course, not all the silver came from China (India as well), but one hell of a lot did. This next bit of text from the same paper quoted above shows just how much silver China imported between 1918 and 1931:

During that time period (1918-1931), the Chinese imported one billion oz of silver, or 30% of total global mine supply during that time. After the signing of the U.S. Silver Purchase Act in June 19, 1934, Shanghai silver stocks plummeted:

Not all Chinese silver was heading to the United States, but a large percentage. Unfortunately, this paper did not list and Chinese silver stock figures for 1935, but I do have one from the U.S. Bureau of Mines Mineral Yearbook: 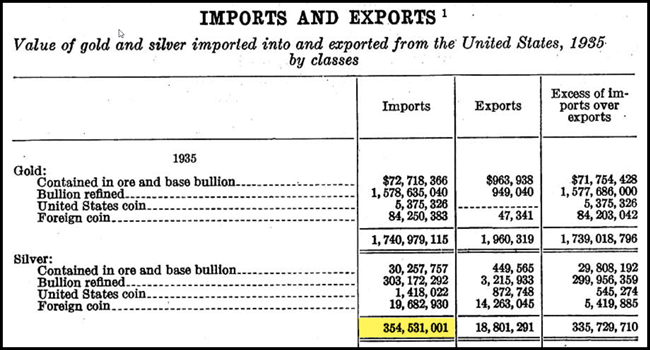 In 1935, the United States imported a total of $354.5 million worth of silver. It is hard to tell exactly what was the average price the U.S. Treasury paid for all of its silver imports that year, but if we apply the $0.77 stated price, the $354.5 million worth of silver imports equals approximately 460 Moz… very close to the 473 Moz stated figure in the first chart published by the USGS silver statistics.

In order for the U.S. Treasury to build up its silver stocks, it pushed up the price it would pay for silver to acquire the metal from various countries throughout the world. Because of this large increase in the silver price by the U.S. Treasury, it forced the Chinese to go off their silver standard.

Again, there is a lot that could be written about this historic point in time, but that will be for another time. I just wanted to show just how much silver the U.S. imported in a single year. If we compare the same figures shown in the first chart above to global mine supply, this is the result: 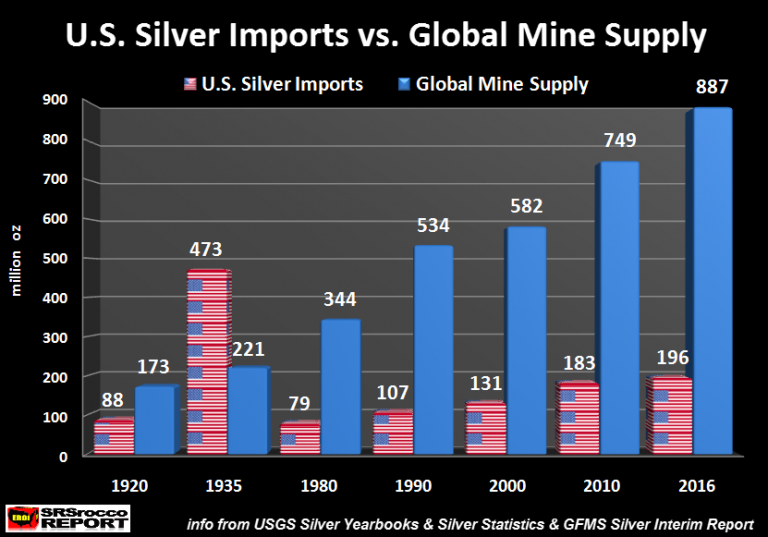 While the U.S. Silver Purchase Act of 1934 nationalized silver, the U.S. Treasury only purchased 109 Moz from American citizens during the 90-day time limit (source: 1939 Silver Money book). Which means, the majority of silver the U.S. Treasury needed came from foreign countries like China and India.

There has been articles written by several analysts (Charles Savoie for example) that state the U.S. Silver Purchase Act of 1934 was instrumental in removing the silver standard in several countries like China and Mexico. While this may be true, the United States was becoming the power-house of the world due to its massive oil discoveries. We must remember, the U.S. was the Saudi Arabia of the world during World War II.

Regardless, the 473 Moz of silver the U.S. imported in 1935 was the largest amount ever. Even though U.S. silver imports were quite high in 1936 at 222 Moz, they were less than half of the previous year.

Lastly, many precious metals investors believe the Chinese have a massive hoard of silver. Honestly, I do not belong to that mindset. While the Chinese did have a lot of silver at one time, they sold quite a lot of it during the 1930’s and also more in the 2000’s. Very few Central banks hold any silver. Most of the silver today is held in private hands or by large institutions… not Central Banks.

The advent of modern technology also forced the United States to remove silver from its coinage in 1965. However, times are rapidly a-changing. In the future, the value of silver will not be based on how much is consumed by industry, jewelry or investment demand, but rather how it functions as a HIGH QUALITY STORE of VALUE compared to most other assets that will be disintegrating as the massive amount of debt and derivatives implodes.