MEDIA STUDY WARNS: Don’t Trust Us Dummies with Your Gold

The astounding results of a groundbreaking, scientific study just released, the first of its kind we know of, confirms a lot we’ve suspected about mainstream journalists.

Journalists are different than the rest of us.

Researchers found journalists’ brains just don’t work as well as yours and mine.

That’s a polite way of saying journalists are dumber than you and I.

The study flatly says journalists have less brain power than others to “regulate emotions, solve complex problems... and think flexibly and creatively,” although study findings say they are no more stressed than the average worker.

That means they understand less about what’s going on than you and I. It also means they are not as competent to figure out what’s wrong – or how to make it right. 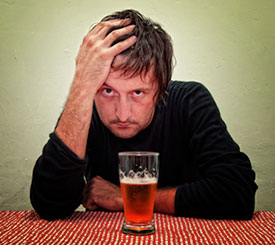 There’s one more stunner: the study found journalists have less ability to “suppress biases” than workers in other jobs and professions.

What? Isn’t that part of the job description?

It certainly doesn’t help matters that journalists stay a little drunker than the rest of us.

Researchers found journalists use alcohol more than average. The study concluded it is “likely” alcohol contributed to the study group’s overall low scores.

The London Press Club never meant to shoot journalism’s self-image in the rump last year when it commissioned this scientific study by Dr. Tara Swart.

Dr. Swart, a neuroscientist and psychiatrist, educated at Oxford and King’s College London, is on the staff at MIT, where she studies and teaches a carload of high end “team building” topics, including brain performance and stress management. Her pre-test protocols include physical and psychological analysis.

But Dr. Swart’s work for the London Press Club was no short course. Her completed study of twenty-one journalists took seven months.

Before you complain that’s not much of a study sample, you should know over ninety journalists initially signed up.

Some just couldn’t go the distance, and gave up or flunked out.

Others were thrown out for using anti-depressants. That left forty making the cut for the study, but only half of those (twenty-one) sweated it out to the finish line.

In its own press statement, The London Press Club went from dumb to dumber trying to emphasize a positive finding.

Journalists, said the press club, are sustained by strong beliefs in their work, and as a result, are willing to work for lower pay than they might make in other professions.

Press club honchos found it “surprising” that “journalists’ brains” showed a “lower level of function” than non-journalists. The press statement laments that alcohol and brain power problems are holding journalists back, but doesn’t address how those failings might influence their reporting, accuracy or honesty.

Trust in news media has been in a nosedive for decades. Pew Research and Gallup polling show growing public perceptions of bias and inaccurate reporting leaving a majority of news consumers distrusting news people.

That distrust is at an all-time high.

Even more telling, a just released Fox News poll found 65% believe reporters write fake news, making it up as they go along.

On the upside for them, trust in journalists still ranks slightly better than car salesmen, and way, way above Congress.

Nowhere would a smart journalist’s brain power be more welcomed than providing knowledge of all things financial – wealth, wealth building, and wealth preservation.

No one has connected those dots better than GATA, the Gold Anti-Trust Action Committee. And no one knows better than GATA’s Chris Powell that mainstream journalists are cowards when it comes to reporting what Powell calls “the financial news story of the century.”

GATA has been pounding that table for years, a table stacked now several feet high with solid documentation that governments hide their gold dealings and manipulate the paper price of gold, all in an effort to control financial markets across the board.

And all the while, a compliant, lapdog media plays along. Powell has offered piles of documentation to every mainstream journalist he’s ever met, with no takers.

“This is elementary journalism,” Powell said in a Money Metals podcast.

“Really any first-year journalism student could do it, but the mainstream financial press refuses to do it, I think largely because it is so sensitive to governments.”

So, just what does Dr. Swart’s study, connected to the dots at Pew and Gallup, connected to GATA’s dots of market and media manipulation, tell us about the people society has allowed to corner mainstream news and information?

One conclusion we can draw – while journalists aren’t as bright as you and I, are no more stressed but are a bit more tipsy, and cannot comprehend bias as well as the rest of us, they can be relentless in what they believe is their exclusive calling to influence thought and opinion.

And they don’t seem bothered at all that their life’s work is not trusted.

There’s one more dot to connect – one that leads to you.

Question the shortcomings of all news and information, place confidence only where it’s earned, and become your own trusted reliable source.