The Central banks bought a staggering $1.5 trillion in assets in the first five months of the year to keep the economy from imploding while at the same time, capping the gold price. Yes, it’s true…. $300 billion a month of Central bank asset purchases pushes up STOCK, BOND and REAL ESTATE values while it depresses or caps the gold (or silver) price.

In a previous article, I published this chart showing Central bank asset purchases up until the first four months of 2017: 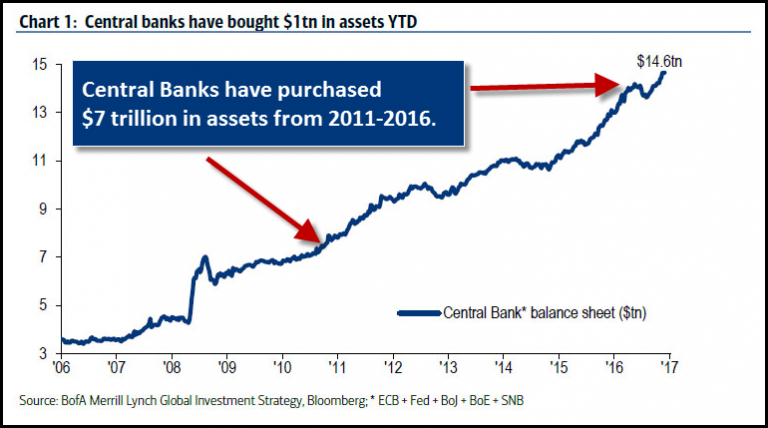 This chart came from a Zerohedge article that showed the Central banks purchased $1 trillion in assets in just the first four months of 2017, and the total of their balance sheets reached $14.6 trillion. In just five years, Central banks purchased $7 trillion in assets. However, in the first four months of 2017, they ramped it up to $1 trillion. Which means, the Central Bank asset purchases could reach $3.6 trillion annualized in 2017, surpassing half of all official purchases in the past five years.

That’s a lot of PROPPING UP folks…. and it also has totally depressed and capped the gold price. But, not for long.

However, before I get into some really interesting charts on just how crazy things are getting in Central bank land, I would like to share some of my sentiments about what is taking place in the Good ‘ole U.S. of A.

Unfortunately, many Americans are now suffering from increased levels of insanity and brain damage… and it’s only getting worse. That being said, I really can’t blame them. Everyday most Americans, from sunup to sundown, receive a constant flow of Mainstream media advertising and propaganda. And it’s even more damaging for the little tots and kids.

From infancy to adolescence, kids receive a tremendous amount of brainwashing via the TV, I-phone and internet. When a tiny tot is sitting in front of a TV all day watching someone named Sparky the clown telling the child to eat sugar loaded with a smattering of cereal, this is the first step in turning that infant into an attention-deficit hyper-active kid that will not only drive his-her mother and father completely insane, but also all the teachers and public that has to deal with this wonderful child in the future.

As the child grows up, it now needs a lot of sugar or the screaming starts. I know of this first hand when I travel on the road and stop at one of the newer Mega-Travel-Stops on the interstate. Maybe some of you have been into one of these new Mega-Travel-Stops that have RV & Big Truck fuel pumps along with 100 gas pumps for regular cars and trucks.

On a busy travel weekend, I would recommend anyone who hasn’t visited one of these fine establishments, to take a bit of time out of your day… to do so. When you get in there, it can be complete CHAOS. Of course, there are many fully wired adults and lots of screaming kids looking for their junk food fix. I have seen some kids grab bags of chips, take them to their parents standing in line at the checkout counter… and when the parent said no, the kid took the bag and threw it back on the wrong place on the shelf. Many times the bag fell on the floor, and the parent did the RIGHT THING… and ignored it… LOL.

I gather if you apart of the mass exodus of families out of the suburbs on the weekend get-a-way, this may seem normal… the CHAOS, ya know. Basically, these Mega-Travel-Stops are frogs boiling in the water and no one seems to notice, and no one seems to care.

Anyhow… after Americans spend top dollar just to live in a McMansion or some other shoddy built suburban home, with all the bells and whistles, they have to spend even more money to GET AWAY FROM IT ALL during the weekend. Of course, this makes perfect sense when we have gone completely insane.

Think about this for a minute. Many Americans spend 40-60 hours during the week to afford the dream home with white picket fence in the suburbs, located six feet from their neighbor, but as soon as Friday rolls around, they grab the kids, the RV and get out of there AS FAST AS POSSIBLE.

So, this is our new economy. Americans working jobs they hate, to buy a house they can’t wait to leave just as soon as the weekend arrives. And all of this is being propped up by massive amount of debt and Central bank asset purchases.

Brain damage impacts Americans in different ways. However, the majority who have the illness, don’t realize they are inflected. So, they continue on their marry life, not realizing the brain damage is getting even worse.

So, what do I mean by brain damage? It’s quite simple. A person who suffers from brain damage, actually believes a new Credit Card in the mail is a like winning a small lottery. Thus, they are able to go out and buy more garbage and crap to fill up an already stuffed house or rental storage facility. Brain damaged Americans no longer understand THRIFT, FRUGALITY or PRUDENCE.

Rather, Americans are racing 70 mph down the interstate, spending money they don’t have on lots of screaming kids, just to get away from it all. And it gets even worse. No, I am not kidding.

In the past, I have tried to share some of what I know about the economic and financial insanity to family and friends, but the response was normally the same, THAT I WAS LOSING MY MIND, and… “Don’t worry… Everything is Fine.” You see, when someone has severe brain damage, they believe BAD is GOOD, WRONG is RIGHT, DEBTS are ASSETS and so on and so forth.

Lastly, when someone responds by saying, “Gold is just a Barbarous Relic”, well then… you know the BRAIN DAMAGE is now irreversible. The poor slob is past the point of no return… and is not curable. All we can do is keep our mouths shut during holiday get-to-togethers, eat the junk food and hope and pray there aren’t too many screaming kids.

Okay… enough of my rant. Let’s get back to the good stuff.

As I mentioned in the beginning of the article, Central Banks purchased $1 trillion of assets in just the first four months of the year. However, they did one better as they added another half trillion in May… LOL: 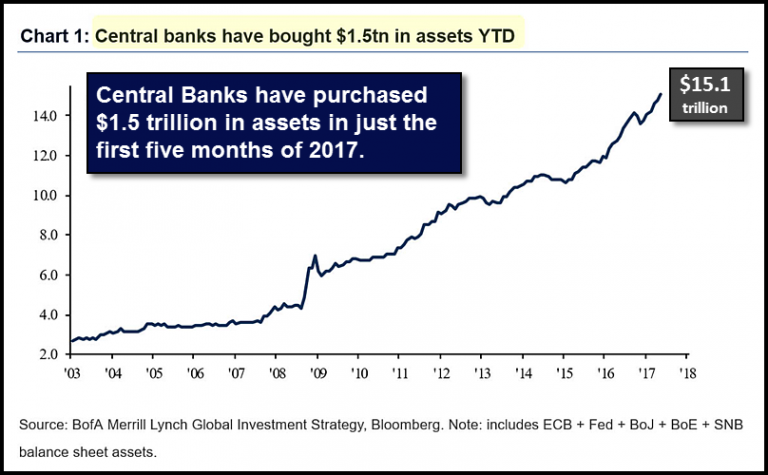 So, the total for the first five months of the year, is a staggering $1.5 trillion. Also, we can see that the Central bank balance sheet is now $15.1 trillion, up from $3.5 trillion before the 2008 U.S. Housing Market and Banking collapse.

If we compare the Central bank balance sheet as a percentage of GDP, we have the following wonderful chart: 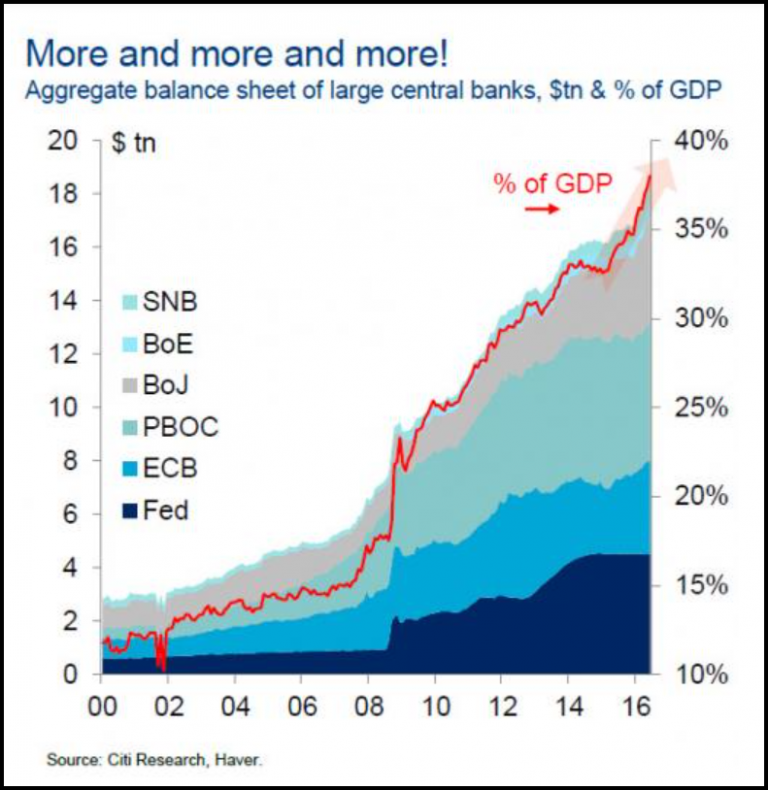 Also, according to a recent zerohedge article, “Nothing Else Matters”: Central Banks Have Bought A Record $1.5 trillion In Assets In 2017, they republished the chart below and stating the following: 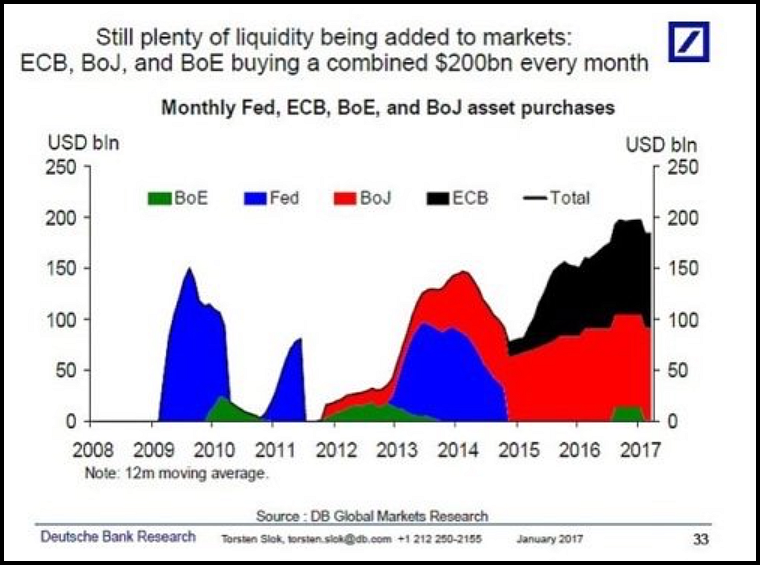 The latest data means that contrary to previous calculations, central banks are now injecting a record $300 billion in liquidity per month, above the $200 billion which Deutsche Bank recently warned is a “red-line” indicator for risk assets. 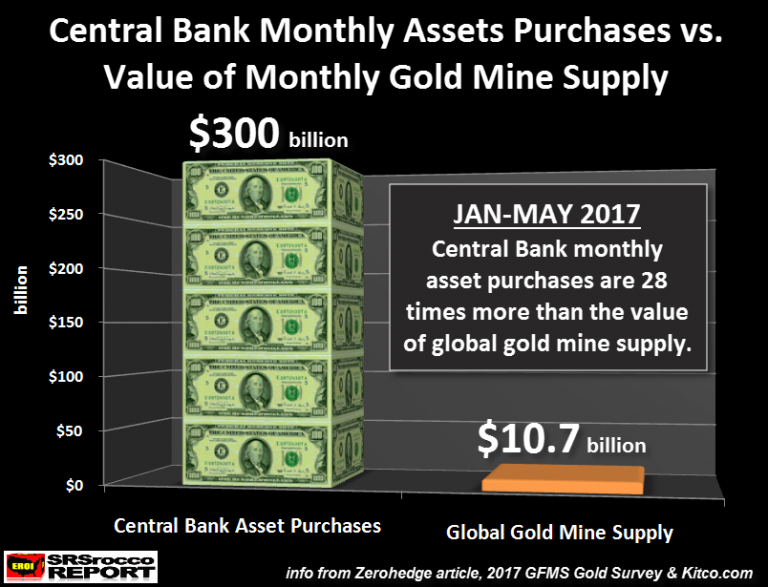 However, it is even more incredible when we compare Central bank asset purchases for the first five months of 2017 versus gold: 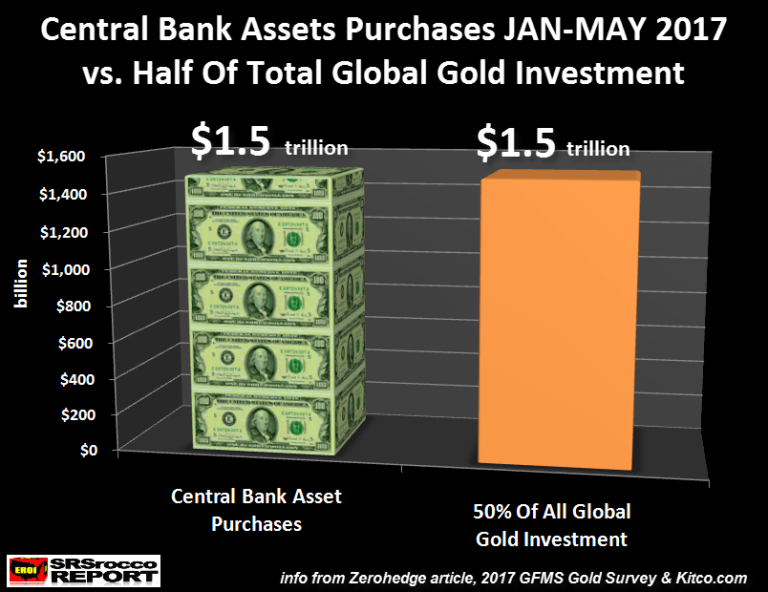 According to the data I published in my article, How High Will Silver’s Value Increase Compared To Gold During The Next Crisis?, total global gold investment is approximately $3 trillion. That’s everything which includes Central Bank gold inventories, and all large and small public-private gold holdings.

Which brings me to the subject of “Frustrated Precious Metals Investors.” I continue to see precious metals investors who are extremely frustrated by the so-called “WRONG CALLS” by the analysts on the gold and silver price movements. Yes, it is true that many of us didn’t realize the degree in which the Central banks would go to prop up the markets… but this is getting completely insane now.

If the Central banks were to stop purchasing assets… then the markets would collapse. Heck, they are trying to collapse even with the massive Central bank intervention. The signs are everywhere.

Folks, without the over $12 trillion in Central bank asset purchases since the 2008 U.S. Housing Market and Banking collapse, the gold price would have been stunningly higher… so would the silver price.

This brings me to an excellent comment that gold analyst Jim Rickards made in a recent interview. He said that the 1998 Long Term Capital Management Hedge Fund collapse, that nearly took down the entire system, was bailed out by the Financial Banks (16 financial institutions bailed out LTCM). When the financial banks were in BIG TROUBLE in 2008, the Central banks bailed them out.

If the Central banks try to pull back on asset purchases, then the market will start to do a NOSE-DIVE. This would likely motivate them to come back in with ALL GUNS BLASTING. So, pay attention to the increase in Central bank asset purchases as a clue to know when they are becoming desperate.

This massive increase in Central bank asset purchases is a last ditch effort to prop up the market and cap the gold price. While they may have more propping up to do, they will likely have to increase their level of buying even more. As it goes exponential… then we know the END IS NEAR.