Are the Chinese getting close to announcing a new gold-backed currency? Well, if the record amount of Australian gold exports into China is an indicator, it may be close at hand. While the Chinese have been importing a lot of gold from Australia, it reached a new record high in 2017.

According to the recently released data by the Australian Government June 2017 Resources and Energy Quarterly, Australia exported more gold to Hong Kong and China during the first quarter of 2017 than any other quarter in history. 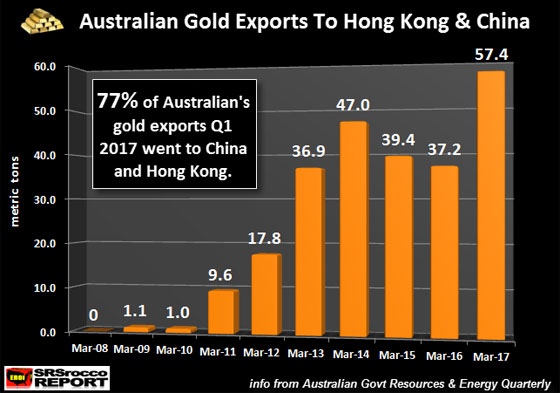 As we can see in the chart above, Australia exported 57.4 metric tons (mt) of gold in Q1 2017 compared to 37.2 mt Q1 2016. What a difference in ten years. Australian gold exports to Hong Kong and China were nonexistent in 2008. However, after the U.S. and global market meltdown that year, China started to import more gold, especially since 2011.

Even though I compared Q1 2017 Australian gold exports to China to the first quarters of previous years in the chart above, the data for all quarters shows that the present quarter is the highest amount on record.

In addition, of the 83 mt of Australian gold exports Q4 2016, two-thirds made their way to Hong Kong and China. So, we can plainly see that China is importing the most gold from Australia ever.

Now, what is even more interesting is that Australian exports more gold than they produce from their domestic gold mines. This is also true for the United States. I decided to take the gold mine supply and gold export figures from these two countries to produce the chart below: 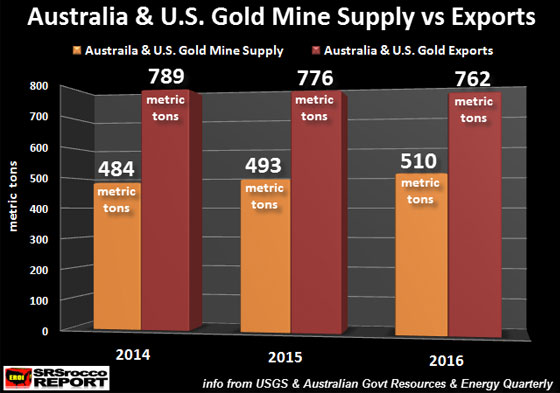 Here we can see that Australia and the U.S. produced a combined 510 mt of gold in 2016, but their gold exports totaled 762 mt. Thus, these two countries exported nearly 50% more gold than they produced in 2016.

Here is a breakdown of Australian and U.S. gold mine supply and gold exports:

Could the increase in Chinese gold imports suggest they are setting the state for a new Gold-Back Currency or Trade? According to the recent article on Zerohedge, Moscow And Beijing Join Forces To Bypass US Dollar In Global Markets, Shift To Gold Trade:

The Russian central bank opened its first overseas office in Beijing on March 14, marking a step forward in forging a Beijing-Moscow alliance to bypass the US dollar in the global monetary system, and to phase-in a gold-backed standard of trade.

....Speaking on future ties with Russia, Chinese Premier Li Keqiang said in mid-March that Sino-Russian trade ties were affected by falling oil prices, but he added that he saw great potential in cooperation. Vladimir Shapovalov, a senior official at the Russian central bank, said the two central banks were drafting a memorandum of understanding to solve technical issues around China’s gold imports from Russia, and that details would be released soon.

If Russia – the world’s fourth largest gold producer after China, Japan and the US – is indeed set to become a major supplier of gold to China, the probability of a scenario hinted by many over the years, namely that Beijing is preparing to eventually unroll a gold-backed currency, increases by orders of magnitude.

In order for China (and Russia) to unroll a gold-backed currency, China must acquire as much gold as it can before the global currency reset. It is quite interesting to see the record amount of gold being exported from Australia to China as talks increase about a new Chinese-Russian gold-backed currency.