Preparing to Barter and Trade Is NOT a Loony Idea

Let’s start with this fact; fiat (paper) currencies die – often spectacularly. That is why precious metals may someday be needed for barter and trade. Anyone who thinks it is silly to worry about such a thing is putting blind faith in Federal Reserve Notes.

The U.S. dollar is having a great run, no question. It will soon be 50 years since Nixon closed the gold window, thereby converting the dollar to a purely fiat currency. Five decades is longer than most purely fiat currencies survive.

Humans carry a normalcy bias. That helps explain why so many assume the unbacked Federal Reserve Note, which has served so long as our currency, will continue to serve in the future.

If you test that assumption, it quickly gets hard to defend.

Point to the exponential growth in U.S. debt, the unrestrained government spending throughout both Republican and Democratic administrations, and the extraordinary monetary policies of the Fed (particularly in the past decade) and reasonable people should acknowledge that the reign of “king dollar” is unlikely to last forever.

Most people don’t know the first thing about the dark history of fiat currencies around the world. Governments use them to borrow and print without limits. Suffer no delusions – fiat currencies were invented for precisely that purpose. The gold in the treasury has never been sufficient for the wars, social programs, and graft which are the hallmarks of a growing government.

America is no exception. Nixon slammed the gold window shut because nations – France in particular – saw the U.S. spending beyond its means and devaluing the dollar. So our trading partners began swapping dollars for bullion. In order to stop the hemorrhaging of U.S. gold reserves, Nixon reneged on the commitment to redeem Federal Reserve Notes in gold.

Honest money in the form of gold, or currency redeemable in gold, imposes restraints that no expansionist government can abide – ours included.

The chart showing the growth of our national debt since Nixon broke the last remaining tie between the dollar and gold is hard to refute. 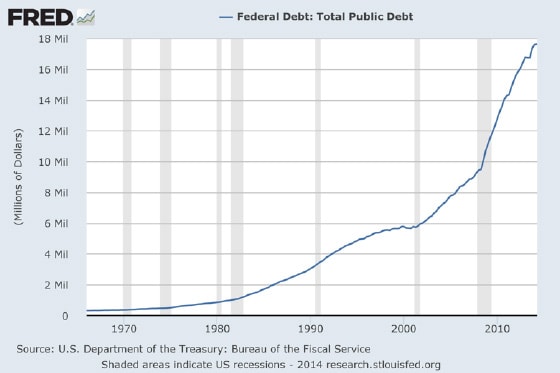 Whether or not the federal government can be trusted to make good on its commitments over time is a serious question.

It would be silly not to prepare for a collapse in confidence, and, by extension, a collapse in the dollar. And nobody should wait. Currency crises through history catch most people by surprise, then it is too late to prepare.

“How did you go bankrupt?"

History is full of nations and currencies rolling slowly downhill for awhile, then plummeting over the cliff.

You can show naysayers a picture of the recent hyperinflation in Venezuela:

Venezuelans who entered 2016 with all of their savings in bolivars probably didn’t know it, but they were in serious trouble. Within weeks they would be searching for scarce food with nothing to exchange but devalued banknotes – slips of paper which merchants suddenly loathed.

The above chart is based on “official” data from the Venezuelan central bank. The reality is even worse. 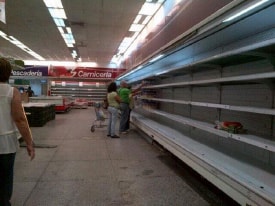 Grocers can’t keep enough food on the shelves because suppliers don’t want bolivars. Instead, much of the food is bought and sold in black and grey markets where people offer something more compelling in exchange.

Once lost, it is extraordinarily hard to restore confidence.

The Venezuelan government, and their bolivar, are struggling to maintain any sort of legitimacy. Total collapse is all but assured.

Granted, the USA is not Venezuela. Our dollar is the world’s reserve currency and the U.S. is much larger and wealthier than that South American nation. But much of the difference boils down to scale and timing. Venezuela is simply ahead of the U.S. on the same road to national bankruptcy.

Absent a course correction, there is little reason to think we won’t arrive at the same destination – hyperinflation and disorder.

It is possible America can make reforms before it is too late. But even those who are optimistic about President Trump enacting change for the better, must admit it is very unlikely that he will ever get Congress to cooperate. And it is that august body which is responsible for spending and debt.

Federal debt and entitlement obligations have kept growing, regardless of which party is in control.

If the U.S. returns to honest money and limited government BEFORE a crisis, it may be the first nation in history to do so. Anybody who doesn’t like those odds would be wise to hold some gold and silver for a handful of good reasons. Having something to barter with is certainly one of them.