There just seems to be a lot of paper floating around in our highly inflated stock, bond, and Forex markets. And… there needs to be. Without an ever increasing amount of leverage via their derivative bets and hedging, these markets would be in serious trouble. Furthermore, the practice of using contracts to hedge bets upon on other derivative bets has put the financial market in a highly fragile state.

The Office of the Comptroller of the Currency (OCC) put out its First Quarter 2017 Quarterly Report on Bank Trading and Derivative Activities. In that report, they published the following chart on the U.S. Banks’ notional value in precious metals contracts: 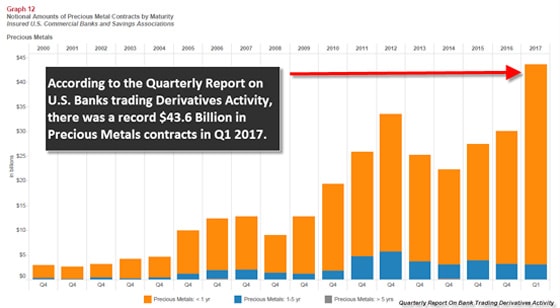 As we can see in the chart, the overall trend has continued higher since 2000. What is interesting is that the notional value of precious metals contracts held by the U.S. banks was even greater in the first quarter of 2017 versus Q4 2012 when the prices of the precious metals were much higher.

In looking at previous data, some quarters reported a larger amount of precious metals contracts, which was due to the banks adding short contracts as the price of precious metals increased. However, Q1 2017 of $43.6 billion was up considerably versus the $28.3 billion in Q1 2016.

For example, in Q3 2016, U.S. banks also held $43.6 billion in precious metals contracts. Again, this was due to a lot of short contracts held by the U.S. banks when the gold price surged to a high of $1,366 in the third quarter of 2016. As the gold price sold off over the next several months, the precious metals contracts declined in the fourth quarter of 2016: 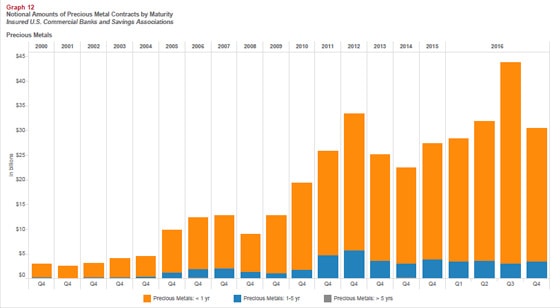 We can see this in the last bar on the chart on the right. But what is interesting is the significant increase in U.S. banks’ precious metals exposure in the first quarter of 2017, shown in the first chart above, when the number of short gold contracts the large U.S. banks held declined significantly in the graph below: 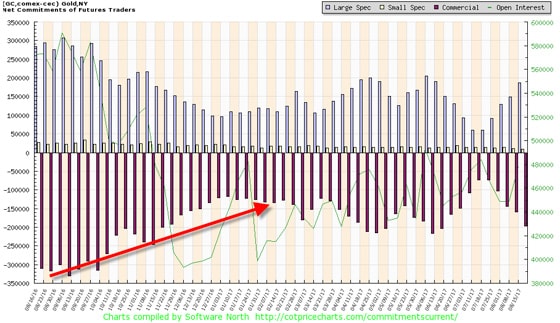 Now, this is only showing the U.S. banks’ gold contracts. These contracts do not include other precious metals, such as silver, platinum, and palladium. However, gold is by far the largest market. If we include the FX contracts (forward exchange contracts), the total notional amount is enormous:

The total notional amount of U.S. banks’ FX & Gold Contracts was a stunning $34.5 trillion in the first quarter of 2017, up from $30.7 trillion at the end of 2016. Here is the definition of a Forward Exchange Contract by Investopedia:

The nature of forward exchange contracts protects both parties from unexpected or adverse movements in the currencies’ future spot rates.

We don’t know the percentage breakdown of the Gold or FX contracts. However, I would imagine the majority being in the FX Contracts that are hedging the different fiat currencies.

Now, what is also quite fascinating about the massive increase in the FX & Gold contracts notional values, is that global GDP hasn’t grown that much since 2013. According to the World Bank, here are the global GDP figures over the past four years:

If we divide the notional amount of FX & Gold Contracts by the global GDP, we can see a very interesting trend:

While the notional amount of FX & Gold contracts has hit a record high, take a look at the next chart: 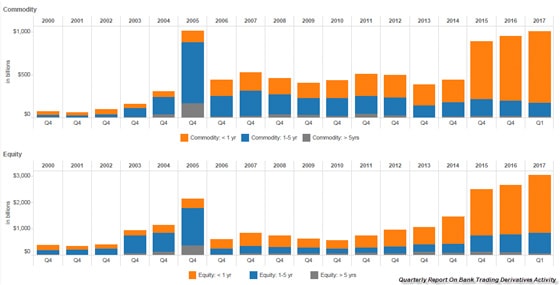 These two charts display the amount of “Commodity” and “Equity” contracts in notional dollar figures held by U.S. banks. While there was a temporary blip in 2005 (mostly longer dated contracts – in BLUE), there was a pronounced increase in 2015, 2016, and 2017 in both of these derivative asset classes.

According to the data by the OCC, the U.S. banks held $1 trillion in commodity contracts and $3 trillion in equity contracts in the first quarter of 2017. While these figures are much less than the FX & Gold contracts, they have still increased substantially over the past three years.

Again…. the U.S. banks are holding onto a record amount of paper derivative contracts in these different asset classes. Yes, it makes some sense that the U.S. banks’ total notional equity value is increasing right along with the rising highly-inflated stock market, but seeing the commodity exposure double when the prices of most commodities are much lower than what they were before 2014, is intriguing. 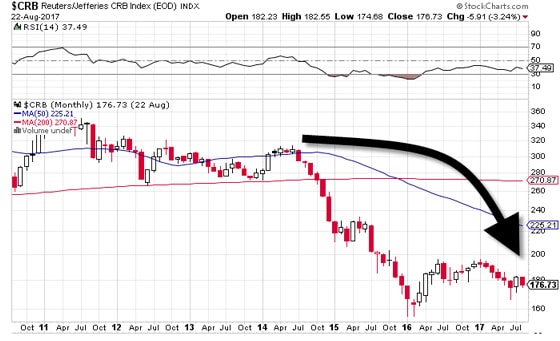 As the commodity index above fell from over 300 in 2014 to 176 currently, the amount of U.S. banks, exposure to the commodity market has more than doubled to $1 trillion. Unfortunately, I don’t know all the particulars as to why the U.S. banks have increased their exposure to such a great extent in these different asset classes. However, to see a record amount of paper trading in a market that is already highly leveraged points to big trouble ahead.