Threats to Digital Wealth Point Up Need for Tangible Backup

Recent high-profile cyber security breaches at Equifax and other financial institutions highlight the perils of an all-digital economy. When wealth can be evaporated or expropriated at the stroke of a key, how secure can your finances really be?

Obviously, there is a big difference between wealth you can tangibly hold and wealth that exists only in electronic form.

One advantage of paper cash is that it can’t be hacked or stolen digitally. Paper money isn’t by any means hard money like gold and silver, but it does at least provide some of the privacy and convenience features that come with tangible assets. That’s why bankers and bureaucrats want to ultimately ban the use of paper Federal Reserve Notes and force all cash transactions to go online. 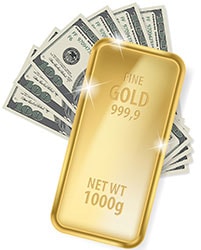 A recent story in the Wall Street Journal suggested, “reducing the supply of cash in the U.S. could help lower crime and make the Fed’s job easier.” Limiting our access to cash... to help monetary central planners do their job – somehow it didn’t occur to the Founders to enshrine that principle into the Constitution!

According to Rogoff, “Another advantage of eliminating large bills would be the effect on monetary policy. The Federal Reserve should be able to implement negative nominal interest rates vastly more effectively in the absence of large bills, which could prove quite important as a stimulative tool in the next financial crisis.”

A negative interest rate policy is effectively a tax on holding cash in a bank. But the policy doesn’t work so well when people can hold paper cash and thus escape the negative rate exaction.

The war on cash is proceeding in small steps, with lots of nudging from corporate America. Visa has launched a “Cashless Challenge” to incentivize small businesses to stop accepting paper currency. “Visa is helping lead the cashless movement by working to reshape how people pay and get paid,” the credit card giant boasts.

Meanwhile, digital crypto-currencies such as Bitcoin continue to proliferate even as they risk being targeted by government regulators. Higher Bitcoin prices raise the incentives for hackers and cyber terrorists to try to break into and disrupt Bitcoin exchanges. As more capital flows into the underground asset class, governments become more interested in regulating or banning it. The banking system becomes more interested in combating or co-opting it.

One of the banking establishment’s biggest guns is JPMorgan Chase CEO Jamie Dimon. He recently bashed Bitcoin as a “fraud.” The manager of the world’s largest hedge fund, Ray Dalio, unleashed similar language on the crypto-currency.

The anti-Bitcoin message sent by financial titans has undoubtedly been received by the U.S. Treasury Department and Federal Reserve. U.S. regulators have thus far taken a mostly hands-off approach to cyber currency markets. But that could change at any time.

Massachusetts Senator Ed Markey (D) said in a CNN interview, “The only answer is to go to final sanctions on the North Koreans... The crypto-currency Bitcoin, which they are using to supply funding to their economy – all of it should be shut off.”

The advantage of “low-tech” free-market currencies such as gold and silver coins is that they cannot be shut down. They are completely off the electronic financial grid.

Precious metals could be subject to conventional regulatory attacks, to be sure. The U.S. has a sad history of banning the private ownership of gold.

But in the era of digital currencies, online banking, and smartphone-enabled day trading, physical gold coins aren’t even a drop in the bucket. They’re more like a drop in the ocean relative to the tens of trillions of dollars in wealth that could be seized digitally.

It’s not a question of whether or not to participate in the digital economy at all. Almost all of us do to some extent (including whenever we use debit or credit cards). The question is whether or not or to be 100% reliant on digital finances without any grounding in tangible wealth.

We don’t foresee a day when that will become safe or prudent. As long as we live in uncertain times, the timeless value of physical gold and silver should command a prominent place in your personal finances.