Bitcoin or Gold: Which One's a Bubble and How Much Energy Do They Really Consume

If you are investing in either Bitcoin or Gold, it’s important to understand which asset is behaving more like a bubble than the other. While it’s impossible to understand how the market will value these two very different assets in the future, we can provide some logical analysis that might remove some of the mystery associated with the market price of Bitcoin vs Gold.

I’ve read some analysis on Bitcoin profitability and energy consumption that seemed unreliable, so I thought I would put my two cents in on the subject.

In a recent article that was forwarded to me by one of my readers, How Many Barrels Of Oil Are Needed To Mine One Bitcoin, the author used the information in the chart above to calculate the energy cost to produce each Bitcoin. He stated that the average energy cost for each Bitcoin equals 20 barrels of oil equivalent. Unfortunately, that data is grossly overstated.

If we look at another website, the author explains in great detail the actual energy cost to produce each Bitcoin. According to Marc Bevand, he calculated on July 28th, that the average electric consumption of Bitcoin was 7.7 TWh/yr, one-third of the Digiconomist’s figure. Here is a chart and table from Marc Bevand’s site showing how he arrived at the figures: 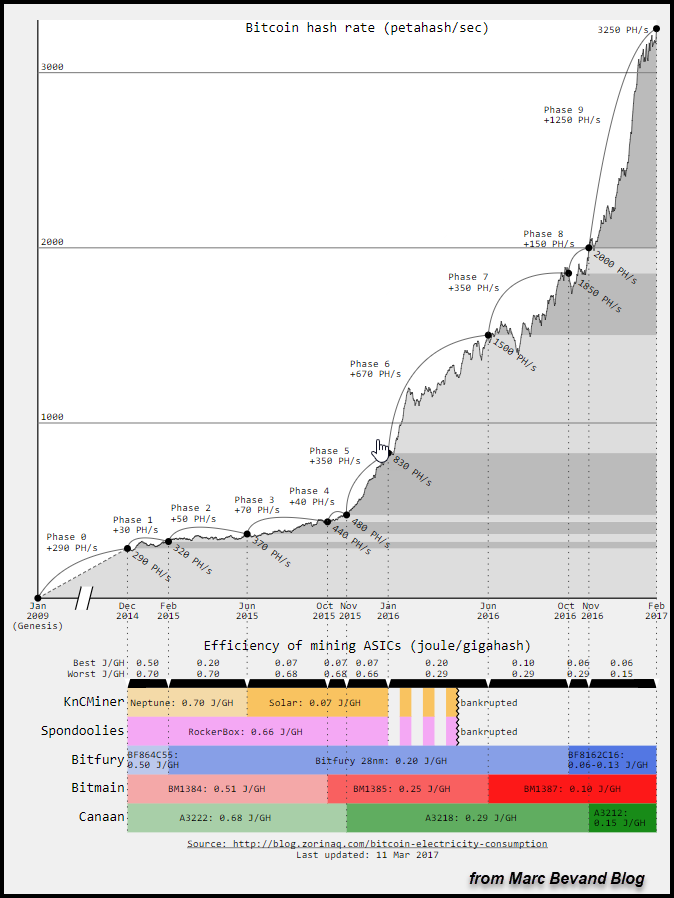 This graph shows the increase in Bitcoin’s hash rate and the efficiency of the Bitcoin Miners at the bottom. If you want to read more detail of the analysis, I suggest you click on the link (Marc Bevand: Electricity consumption of Bitcoin: a market-based and technical analysis) 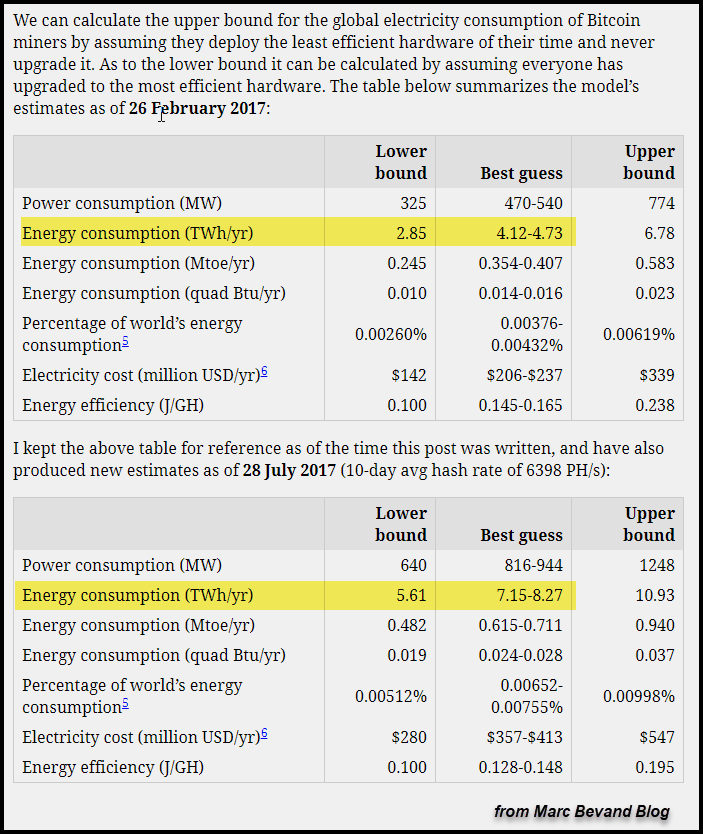 Okay, after taking all these estimates into consideration, I arrived at a total of 11.2 TWh/yr for Bitcoin mining. As you can see, this is much less than the 24 TWh/yr by the Digiconomist. Now, if we compare the annual amount of Bitcoin energy consumption to other countries total electric consumption, Bitcoin uses more electricity than Uraguay, Kyrgyzstan, and Paraguay:

I would recommend those who want to understand the differing opinions on the Bitcoin energy consumption figures by these two analysts to go to the link I provided at Marc’s blog. If you go to that page, you will see a long debate between Marc and the Digiconomist on why they disagree.

Regardless, I believe Marc Bevand did a much better job at crunching the numbers and details of the Bitcoin Miners and their efficiencies to arrive at a much more accurate figure than the Digiconomist. Either way, Bitcoin does consume one hell of a lot of electricity to produce each digital coin.

Now that we have a more realistic figure for Bitcoin’s energy consumption, we can compare it to gold. According to the statistics published by the top two gold mining companies in the world, Barrick and Newmont, they consumed approximately 8.5 Gigajoules of energy to produce each ounce of gold in 2016. Yes, I realize these energy metrics are a bit difficult to understand, but these are the figures used by the industry. If we convert all these energy figures from Bitcoin mining and the Gold Industry to barrels of oil equivalent, we end up with the following results: 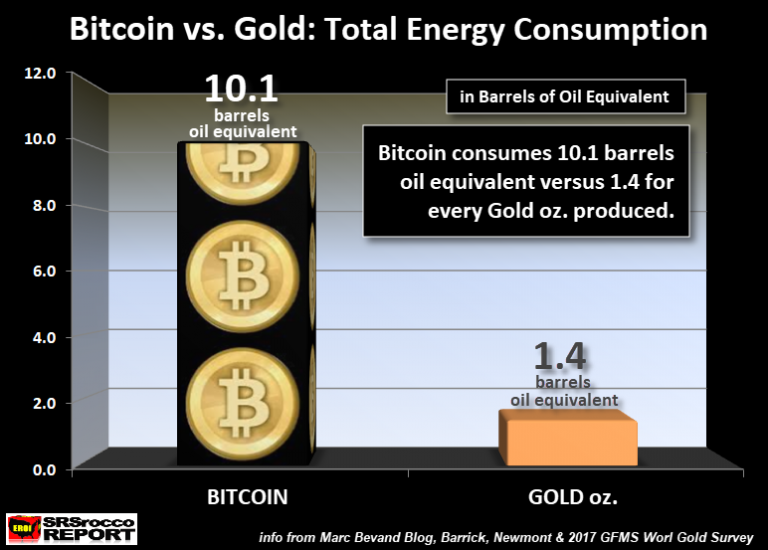 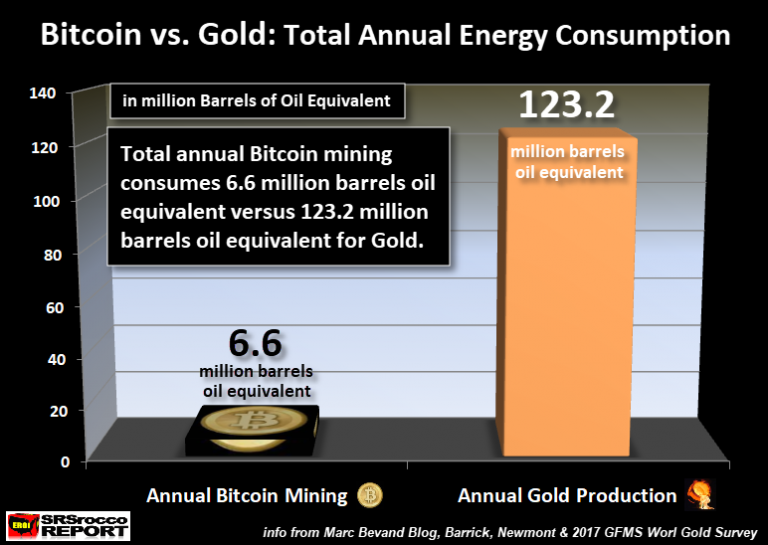 While some precious metals analysts have switched over to investing more in Bitcoin (and cryptos) than gold, I don’t belong to that group. Unfortunately, these analysts seem to have forgotten about energy and the Falling EROI – Energy Returned On Invested. One of these analysts recently put out a video suggesting that silver only had about ten years to be removed from the shackles of Central Bank manipulation before new high-technology would produce silver for next to nothing. I believe this analyst used the Star Trek replicator as an example.

I can assure you, the world isn’t anywhere near to producing silver for pennies on the dollar. On the contrary, the world economy is much closer to collapsing under the weight of the Falling EROI than heading into a new JETSON’s high-tech age:

I will be publishing detailed information in the future why I believe Gold and Silver will still be the GO TO ASSETS to own versus Bitcoin and the Cryptocurrencies.

Bitcoin vs. Gold: Which One’s In A Bubble?

So, the big question on the minds of many investors is… which asset is more of a bubble, Bitcoin or Gold? If we use the cost of production as a guide, my answer is Bitcoin. Again, according to the data put out by Marc Bevand, he estimated that the total cost to produce Bitcoin on May 31st, 2017 was approximately $1,010: 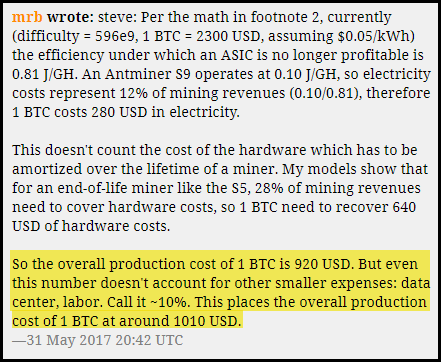 Actually, the text above came from Marc as he was replying to my question on his blog. However, this Bitcoin break-even cost is now outdated. So, I sent Marc an email back at the beginning of August to see what his new estimate for the cost to produce Bitcoin. He replied on August 8th stating his best estimate was about $1,500. By adjusting for the increased cost to produce Bitcoin over the past two months, I came up with a figure of $1,800. Yes, it’s a ball-park figure, but it’s the best estimate we can go by.

Now, if we compare the estimated Bitcoin cost and profit versus the same for gold, Bitcoin is the clear BUBBLE WINNER: 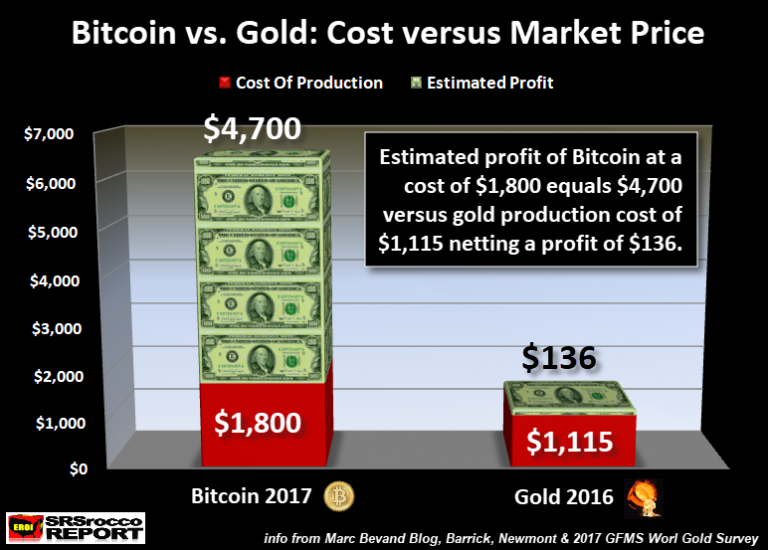 Currently, Bitcoin is fetching an estimated $4,700 profit per coin versus $136 for gold. Here’s how I arrived at those figures:

If we compare the estimated profit margin in these two assets, we can clearly see that Bitcoin has a great deal more FROTH than gold. Yes, I realize I took some liberties in providing the Bitcoin production cost, but I believe it’s a pretty accurate figure. While other articles have stated that Bitcoin mining is no longer profitable, I disagree. I believe it is exceedingly profitable to produce Bitcoin if you have purchased the most recent mining equipment and have set up the operation in an area that provides low electric utility rates.

Alright, I imagine there are some (maybe many.. LOL) that don’t agree with my analysis. First, many people in the precious metals industry still do not agree with the overriding factor that determines the price of gold is its cost of production. Second, while supply and demand forces do impact the gold price over the short-term, the cost of production has always been the number one factor over the longer-term.

This last chart shows the estimated Bitcoin production cost versus the market price:

If we go back to the end of 2013, we can see a spike up and then consolidation lower in 2014. The present Bitcoin price spike in 2017 has lasted longer than the one at the end of 2013, but we can clearly see a pattern. Who knows how long Bitcoin will continue higher before it consolidates lower. Some precious metals analysts now turned Bitcoin specialists are suggesting that Bitcoin will reach $13,000 by the first half of 2018. Hell, I don’t know if that will happen. Maybe it will; perhaps it won’t. I really don’t care.

I have nothing against Bitcoin. However, Bitcoin needs a very high-tech electronic system to function. On the other hand, any poor slob in the country owning some gold can walk into town and use it as money. Now, when I say, “poor slob,” I am using that term in jest. Actually, I am a poor slob just like the next person. Regardless, Bitcoin functions as an electronic asset if the machines keep working. Now, go down to Puerto Rico and see how many people will take Bitcoin. However, if you have cash, gold, and silver… you are ready to do some business.

If a person wants to own and speculate in Bitcoin… that’s fine. But, it is much more prudent to hold most of one’s wealth in physical gold and silver rather than Bitcoin.