U.S. Public Debt Surges By $175 Billion In One Day

After the U.S. Government passed the new budget and debt increase, with the President’s signature and blessing, happy days are here again. Or are they? As long as the U.S. Government can add debt, then the Global Financial and Economic Ponzi Scheme can continue a bit longer. However, the days of adding one Dollar of debt to increase the GDP by two-three Dollars are gone forever. Now, we are adding three-four Dollars of debt to create an additional Dollar in GDP. This monetary hocus-pocus isn’t sustainable.

Well, it didn’t take long for the U.S. Government to increase the total debt once the debt ceiling limit was lifted. As we can see in the table below from the treasurydirect.gov site, the U.S. public debt increased by a whopping $175 billion in just one day: 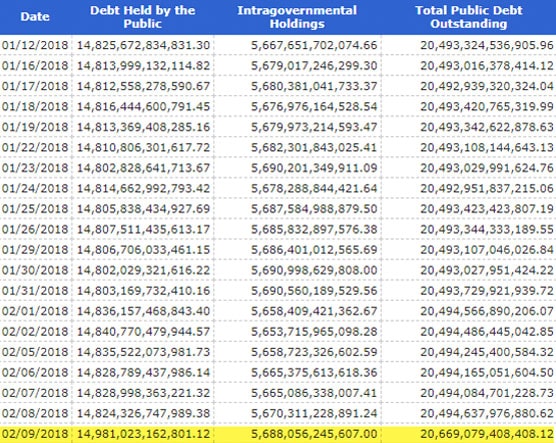 I gather it’s true that Americans like to do everything… BIG. In the highlighted yellow part of the table, it shows that the total U.S. public debt outstanding increased from $20.49 trillion on Feb 8th to $20.69 trillion on Feb 9th. Again, that was a cool $175 billion increase in one day. Not bad. If the U.S. Government took that $175 billion and purchased the average median home price of roughly $250,000, they could have purchased nearly three-quarter of a million homes. Yes, in just one day. The actual figure would be 700,000 homes.

Regardless, we are now off to the races when it comes to adding GOBS of DEBT to continue a Ponzi Scheme that would make Bernie Madoff jealous.

There is so much that I want to write about and put into videos, but there is only so much time in the day. I saw Andy Hoffman’s newest video where he let his followers know that he sold the rest of his Gold and was totally out of precious metals and fully invested in Bitcoin and Cryptos. Good for Andy. Unfortunately for Andy, like many who rely on SUPERFICIAL ANALYSIS forgets there is this thing called “ENERGY” that makes everything work. Without energy, the entire SYSTEM comes crashing down. And the most fragile part of the system is HIGH-TECH and especially Bitcoin that consumes a disgusting amount of energy to provide no real productive use. More on that later.

However, if you haven’t watched my newest video on the Huge Market Correction Update & Silver Price Trend, I suggest that you do:

The idea that precious metals are a Barbarous Relic and are no longer useful because High-Tech Cryptos will be the new currency, totally disregards the dire energy predicament we are facing. Andy Hoffman got out of gold and silver and into Cryptos because he, like many, are guilty of SUPERFICIAL THINKING & ANALYSIS. I don’t mean to be harsh here, but when Andy mentions in his video that when the OLD FARTS who believe in precious metals finally die off, then the younger folks will have totally forgotten about gold and silver, get’s my creative juices flowing.

If you do not incorporate the ENERGY DYNAMIC into your analysis or forecasts, you will be totally unprepared for what is coming.

Thus, the BLIND continues to lead the BLIND. So be it.

Anyhow… I will be putting out more work on how the Falling EROI of Energy is destroying everything in its path. Individuals who don’t think the $175 billion increase in U.S. Public Debt has anything to do with the Falling EROI of energy, makes perfect sense why they would follow someone like Andy Hoffman or the other Crypto Aficionados into an even Greater Bubble & Ponzi Scheme than the Fiat Monetary System.