Thanks to the Fed and Central bank intervention, sales of Gold and Silver Eagle sales declined sharply over the past year. Yes, it’s true… precious metals investors have lost interest in gold and silver as the stocks, real estate, and crypto markets reached new highs in 2017. So, who wants to continue purchasing gold and silver when many cryptocurrencies were experiencing 10% increases in a day? If you're new investing, check out the most popular gold and silver products to purchase and go from there.

Historians will look back at 2017 as the year that asset prices went utterly insane. Of course, the cryptomarket enjoyed the highest gains compared to most assets, but many stocks hit bubble territory last year as well.

Here is a small list of Big Gaining Assets in 2017:

Now, let’s look at the gold and silver price increases in 2017:

While gold did go up more than double silver last year, many investors became frustrated with the metals and turned to making big gains in stocks and cryptos. Furthermore, the motivation to protect wealth by purchasing precious metals didn’t seem to matter anymore because the Dow Jones Index is supposedly going to 50,000 and Bitcoin, $100,000. So, with these sorts of gains in the future, why on earth would anyone want to buy precious metals?

Investors and the public today have become totally irrational. Also, no one wants to work anymore. Instead, we rather put $5,000 in Bitcoin or the other 1,500 cryptos so we can retire to Tahiti with our massive Blockchain profits. Furthermore, if we watch some of the videos by the crypto aficionados, that is precisely what they are doing… well, at least on a temporary vacation basis. Nothing like learning about cryptos from someone sitting on the beach drinking cocktails.

And, if an individual isn’t making $millions in cryptos, then the next best thing is the exponentially rising stock prices today to make money hand over fist. If an investor was smart enough and invested a mere $10,000 in Amazon at the low of $50 in 2009, they would be holding on to $300,000. Yes, I realize this isn’t like making $millions in the cryptos, but not everyone can be a millionaire.

So, why can’t everyone be a millionaire? During one of my conversations years ago with retired NASA engineer, Don Arabian, he said that if the government gave everyone $1 million, then the next day, no one would show up for work. Just think about that for a minute. If you are a waiter and you just received $1 million, are you going to show up to work at the restaurant the very next day? Hell no… LOL. You are going to go shopping and maybe buy a new car or go to your favorite high-scale restaurant… because, you deserve it.

Unfortunately, when you go to the Auto Dealer or restaurant, you are going to find that no one is there to sell you a car or bring you a rack of lamb with mint jelly. Why? Because, all the Poor Unworthy Slobs that were broke are now looking to spend that $1 million.

NOTE: when I use the term “Poor Unworthy Slob,” I am not making fun of the public, but rather in the Bankers’s vernacular, as they see the public. Thus, I am also a poor unworthy slob as it pertains to Wall Street.

The Fed and Central Banks have funneled investors into Stocks, Bonds, and Real Estate. It’s that simple. If we look at the next two charts, we can plainly see that ALL IS NOT WELL in the markets. 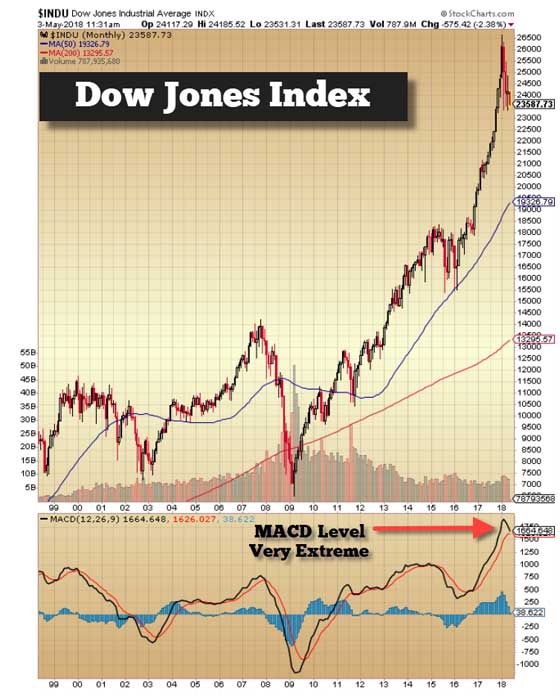 Typically, the markets experience a correction about every seven years. You will notice in 2015-2016, the Dow Jones Index was rolling over and should have corrected lower over the next 2-3 years. Instead, we had a huge spike higher, especially in 2017 and beginning of 2018. The MACD technical level is screaming a “Very Extreme” reading.

Then if we look at Amazon, it’s even more irrational than the Dow Jones Index: 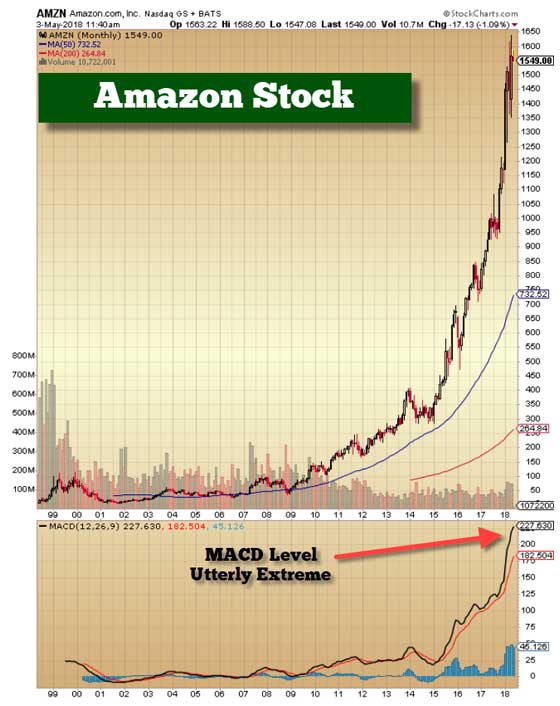 Now, while I have mentioned Amazon several times in articles and videos, I would like to add some new information that David Stockman shared in a recent article from his blog when the company released its Q1 2018 results, Jumping The Great White Shark Of Bubble Finance:

Last night Amazon reported a whopping 41% plunge in free cash flow for the March 2018 LTM period compared to prior year. Yet it was promptly rewarded by a $50 billion surge in market cap—-with $10 billion of that going to the guy riding topside on the Great White Shark of Bubble Finance.

Fully 96% of Amazon’s $5.0 billion of LTM operating income was accounted for by its cloud services business (AWS).

The e-Commerce juggernaut, by contrast, posted just $188 million of LTM operating income, which am0unts to, well, 0.1% of sales on a computational basis. But we’d round that to zero—especially because Amazon’s e-Commerce business was already almost there in the year ago period when its margin on sales came in a tad higher at 0.6%!

So, why would the country’s largest online retailer, which is just breaking even, have a $1,550 stock price?? Who knows, but I would imagine the Crypto aficionados may provide a good answer.

If we look at the markets today, they have become totally irrational. Even though the gold and silver prices were at their lows in 2015 and 2016, precious metals investors still were motivated to purchase gold and Silver Eagles coins. But, with the massive move higher in the stock and crypto markets in 2017… then enough was enough.

Now, if it weren’t for the low-interest rates, money printing and the massive increase in credit and debt by Central Banks, the markets would have POPPED several years ago. So, once again, we can thank the Fed and Central Banks for funneling the public away from sound investing in the precious metals and into the biggest bubbles in history.

We can see the damage of Central bank intervention in the following chart: 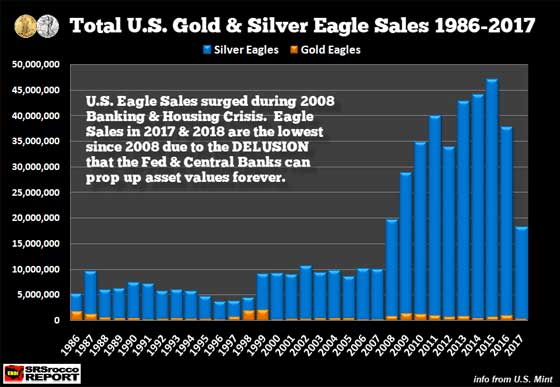 When the stock market fell off a cliff in 2008, along with the collapse of the U.S. Investment Banking and Housing Markets, Silver and Gold Eagle sales surged. As we can see Silver Eagle sales continued higher until they peaked in 2015 at 47 million oz (Moz). Even though demand fell to 37 Moz in 2016, it wasn’t until the stock and crypto markets went insane in 2017 did Silver Eagle sales drop to a 10-year low of 18 Moz.

Currently, Silver and Gold Eagle sales for the first four months of 2018 are down considerably versus last year: 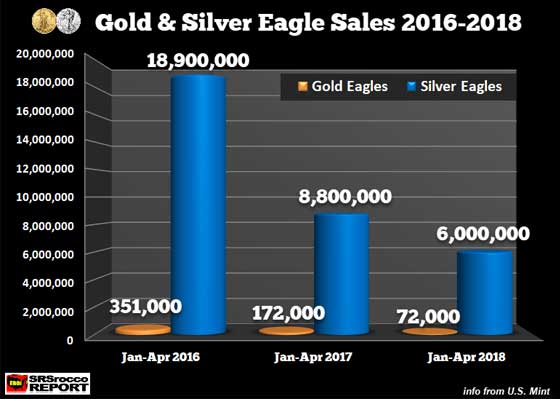 I don’t see Silver and Gold Eagle sales increasing until the stock markets start to unravel. Although, if I didn’t own any physical gold or silver, I don’t know if I would try to time the downturn in markets to make my first purchase.

Regardless, precious metals investors who continue to hold or acquire more gold and silver will be holding some of the best assets when the markets roll over and crash over the next 1-2 years.