Silver Threads among the Gold: What the Tea Leaves Seem to Be Telling Us

The ongoing July silver (and gold) slam has a 2008 feel about it. Important data point elements are different, but there's an air of panic on the part of physical precious metals' owners.

"Major trend lines" being broken to the downside; physical metals' buying (in the U.S. off significantly so far on the year; (some) long-term silver holders giving up the ghost and selling their metal below spot.

About the only thing we have yet to see – on a large scale – is "paper metal" being offered at a price well below what a customer would actually pay for the physical.

In a recent interview for The New York Times Magazine, George Soros talked about his years' running the very successful Quantum Fund – which yielded investors an almost unheard of 40% annual rate of return.

He spoke of his "theory of reflexivity" – the idea that "peoples' biases and perceptions can move prices in directions that don't accord with the underlying reality."

He would "nibble" on an idea until investors' emotions became increasingly disconnected from what was really taking place – or what was almost certainly slated to be – once more balanced circumstances had come to pass. Then he would substantially add to his position.

Soros didn't always get it right, but when he did, he made a killing. His most famous bet was shorting the British pound... against the Bank of England.

Soros claimed his strength as an investor was in recognizing and acting on what he referred to as “far from equilibrium” moments. 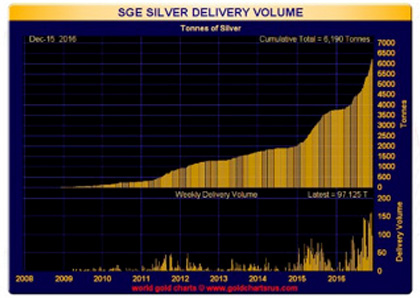 As for near-term action, Hidden Pivot maven, Rick Ackerman wrote recently in his Rick's Picks column, that silver has the potential to make a large move either up or down, depending upon what the price does on the hourly and monthly charts. He says in part,

The monthly chart provides reason for cautious optimism, implying as it does that Comex futures could be bottoming slightly above $15. If a powerful and sustained upturn lies in the offing, the September contract would need to hold above 15.093, a midpoint ‘Hidden Pivot’ support... The chart further suggests that Silver must push above a peak at 21.525 recorded in July 2014 to launch a sustainable move that would have the potential to reach 55.055.

Putting this all together leads us to the crux of the matter. Led by India, the world is on pace to consume all of the silver produced in 2018, yet the dollar price of silver is now down over 10% year-to-date. That's a dichotomy that must soon rectify itself. Either physical silver demand will crash before year-end OR the paper price will be forced to respond as it did in 2016.

Thus, watch these global physical demand numbers closely in the months to come. If Indian and global physical silver demand continue to surge, the digital derivative pricing system must respond with higher prices or it will risk collapse and failure.

So – are you as a physical silver holder (or one who anticipates becoming one) going to run with the crowd when they are "moving prices in directions that don't accord with the underlying reality"? Will you cower in the corner or "give up" your metal at fire sale prices?

Or will or you take a page from George Soros' book and act, now that the price of silver gives significant evidence of having reached a "far from equilibrium" moment?

Something's got to give. Try not to make it you.