With all the talk about Central banks going “Cashless,” someone needs to tell the Federal Reserve. Why? Because the Federal Reserve just placed another large order for newly printed 2018 Dollars. Interestingly, the U.S. Treasury will print the largest number of $100 bills since it came out with the updated anti-counterfeit $100 bill in 2013. 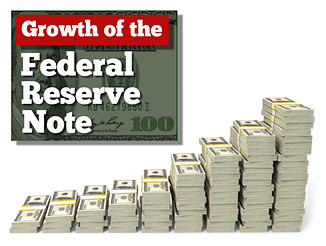 Not only is the Federal Reserve ordering more bills to replace worn-out bills that will be taken out of circulation, but it will also add a percentage for the increased public demand. And let me tell you, this demand continues to rise significantly. For example, total U.S. currency in circulation is now $1.57 trillion, up nearly double from the $792 billion in 2007: 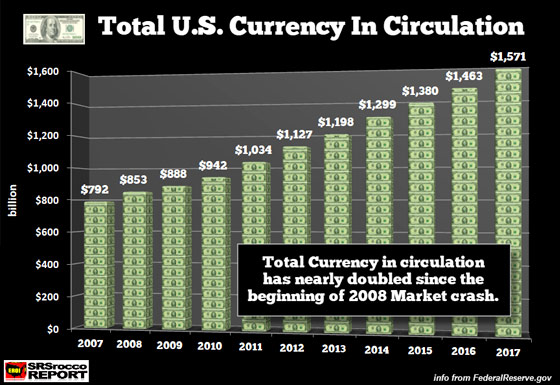 We use the majority of new notes printed each year to replace unfit notes that Reserve Banks have removed from circulation. For example, we estimate that in 2015, 85 percent of the new notes printed will replace destroyed currency, while the remaining 15 percent will meet increased public demand.

So, the Fed states that they replace 85% of old Notes with new ones and add 15% for increased public demand. However, in their current 2018 Federal Reserve Print Note order, they published the following:

The nearly 7.4 billion notes included in the FY 2018 order reflect the Board’s estimate of net demand for currency from domestic and international customers. The print order is determined by denomination and is based on destruction rates and historical payments to and receipts from circulation. Historically, the majority of the notes that the Board orders each year replace unfit currency that Reserve Banks receive from circulation. The estimated number of notes that Reserve Banks will destroy accounts for about 75 percent of the FY 2018 print order and includes both unfit currency, as well as all old-designs of some denominations received from circulation.

The expected growth of Reserve Bank net payments (payments less receipts) to circulation and inventory management adjustments account for the remainder of the notes in the FY 2018 print order.

Here the Fed is saying that due to Reserve Bank net payments (less receipts) to circulation and adjustments to inventory, it will add 25% more notes to satisfy the increased public demand. This is quite interesting to see that the growth of new bills in 2018 will be 25% when a great deal of talk is that we are heading towards a “Cashless society.”

Now, the overwhelming rise in the value of U.S. currency in circulation is due to the increased printing of the $100 bill: 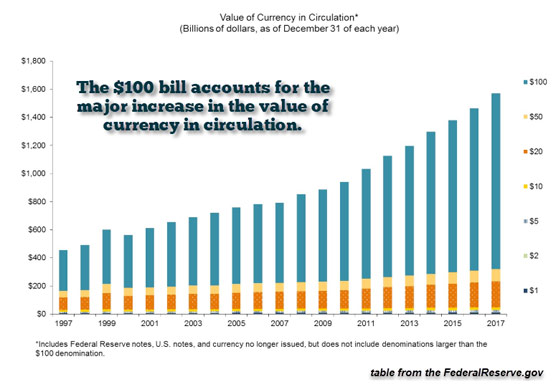 The U.S. Treasury will print $167 billion worth of $100 bills of the total $233 billion ordered by the Federal Reserve. Thus, the value of the new $100 bill will account for 72% of the notes printed in 2018. However, there is another interesting trend taking place. While the Fed may be removing 85% (75% in 2018) of old bills each year, most of those bills are the lower denomination.

According to the Fed, the larger denomination bills have a much longer lifespan: 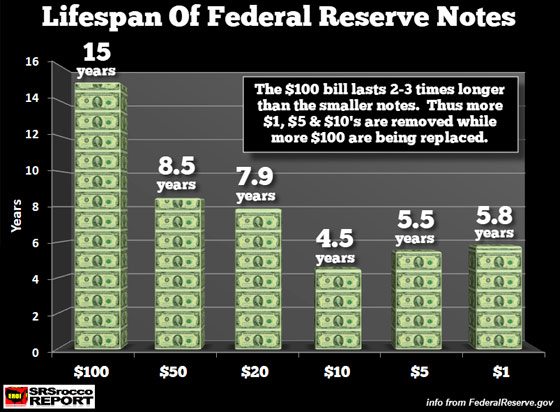 Because the $100 Note lasts 2-3 times longer than the other Federal Reserve Notes, the Fed must be removing a larger number of the lower denomination bills ($1, $5 & $10) and replacing them with more $100 bills. This only makes logical sense. Furthermore, if the Fed will be adding 25% more new bills in 2018 for “increased public demand”, then it must be expecting a great deal more inflation.

Moreover, it doesn’t make sense that the Fed is considering a cashless society if they are continuing to increase the value of Federal Reserve Notes in circulation. Rather, you would think they would be reducing the number of bills to transition to a cashless society.

Regardless, we also must consider that a lot of illicit drug trade is funded by the $100 bill. Also, it is no surprise that the Elite via the Central Banks is likely involved in this sort of activity. If it is extremely profitable, then why not… ah? So, why would the U.S. be in Afganistan if it weren’t for the $1+ trillion opium global drug trade? After the U.S. became involved in Afganistan, opium poppy production surged and is now the highest ever.

Do we actually believe the Elite and Central Banks are going to go to a total Cashless Society? How on earth with the huge and very profitable drug trade amongst other illicit activity continue? With a Debit Card?

Now, I am not saying that Central Banks will not continue to push for more digital and less physical money, but it doesn’t make sense to totally get rid of a currency that allows the drug trade to function. Furthermore, how does the poor function in a cashless society? Most of the poor can’t afford a checking account. And a percentage of the poor receive cash for their work.

Lastly, while the push for a cashless society continues in the mainstream and alternative media, I highly doubt we will ever get there because of the reasons stated above and also due to the coming ENERGY BRICK WALL. We need a highly advanced technological system to allow a digital cashless system to function. Unfortunately, we are about to hit the Energy Brick Wall right at the time this nonsense is being suggested.