Well, it looks as if a bit of life has come back into the silver market as US mint coins for sale, like the Silver Eagle sales jumped in August due to lower prices. While Silver Eagle sales have fallen over the past few years, if we exclude typical high January demand, sales so far in August are the highest in a year. 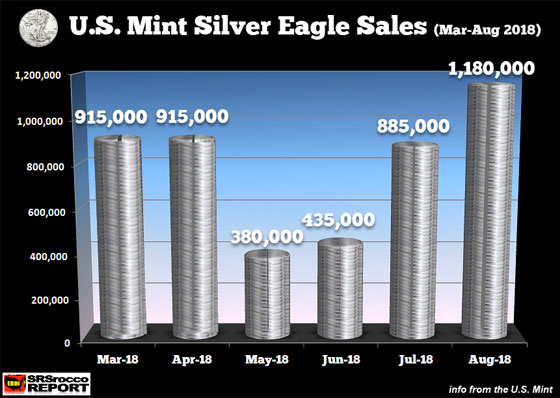 Now, as Silver Eagle sales jumped in August, buying of Gold Eagles fell to 15,000 oz and are down by more than half compared to the 35,000 oz sold in July. My analysis suggests that Gold Eagle sales increased in July in response to the heated “Trade war rhetoric” between the U.S. and China. However, now that trade talks between the countries have resumed, it seems as if demand for Gold Eagles has subsided.

Regardless, while precious metals sentiment and buying is still very low, Silver Eagle sales are down 70-75% than what they were two years ago, I believe we will see a huge increase in demand when these highly overleveraged markets begin to correct violently. Moreover, we may experience the largest physical gold and silver buying in history as the worlds greatest bubbles pop.