If we go back to the last big market correction, the precious metals didn’t fall, they soared. There were several reasons the gold and silver prices disconnected from the broader markets at the beginning of 2016.

In my newest video update, I show exactly what happened to gold and silver price as the Dow Jones fell more than 2,000 points in the January and February 2016. Investors back then who were expecting falling precious metals prices watched as gold shut up by nearly $200.

In my newest short video update, Gold & Silver Soared During The 2016 Big Market Correction, I explain what prompted investors to flock to the precious metals as worry turned to fear in the broader markets:

In the video, I discuss the price action in the Dow Jones, gold and silver prices. You can see quite clearly that as the markets began to correct lower, the precious metals disconnected and jumped higher: 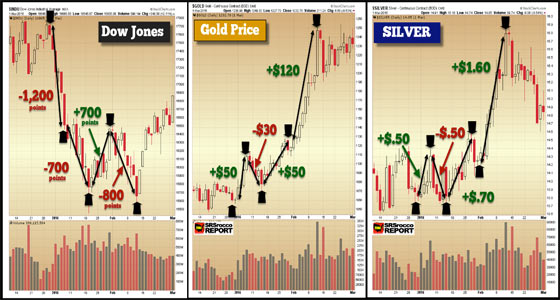 What was taking place at the end of 2015 when the Dow Jones was topping at 18,000, the gold and silver prices were bottoming. While the precious metals prices are up higher today than what they were at the beginning of 2016, we have a very similar setup. Again, we are seeing a much different gold and silver market today than it was in 2008 before all hell broke loose in the markets.

Lastly, I believe investors are going to be surprised by the price action of gold and silver when the highly leveraged markets ROLL OVER in a big way.