The U.S. Government’s balance sheet is one step closer to blowing up as its debt, and interest expense hit new record highs. And when I say “new record highs,” I am not exaggerating. It’s been a while since I checked the data on the TreasuryDirect.gov website, but when I researched the figures for this article, I was quite surprised by just how quickly the numbers are rising.

Thus, it’s also no wonder the stock markets continue to grind higher and higher because, without the U.S. Government’s unlimited check-writing ability, the markets would have collapsed years ago. So, to all the Keynesian wanna-be’s who believe the Central Banks can print our way to prosperity forever, please tap your shoes together three times and say, “Everything will be okay because I have my 401k.”

If we look at the following two tables, we can see that the percentage increase of the interest expense in July is much higher than the previous months: 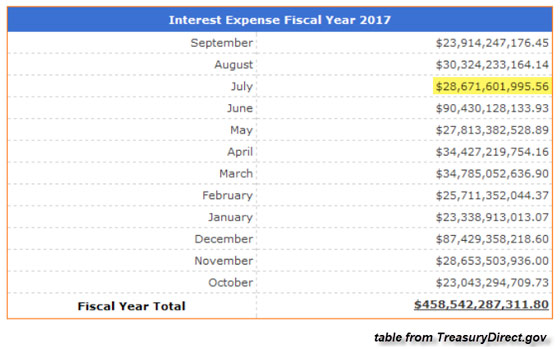 The interest expense the U.S. Government paid in Apil, May, and June was up 22%, 28%, and 6% respectively versus the same months in 2017. However, July was up 41% compared to July last year. Furthermore, total U.S. interest expense in 2017 was $458 billion while the amount paid this year is $455 billion and we still have two months remaining.

The U.S. Government paid $54 billion to service its debt in the last two months of the fiscal year last year. So, if we assume a 20% increase of that figure, the U.S. Treasury will have to fork out another $65 billion for August and September for a total of $520 billion in 2018.

And, the reasons for the rapidly rising interest expense are the ballooning debt and higher interest rate. We can see this quite clearly in the following chart: 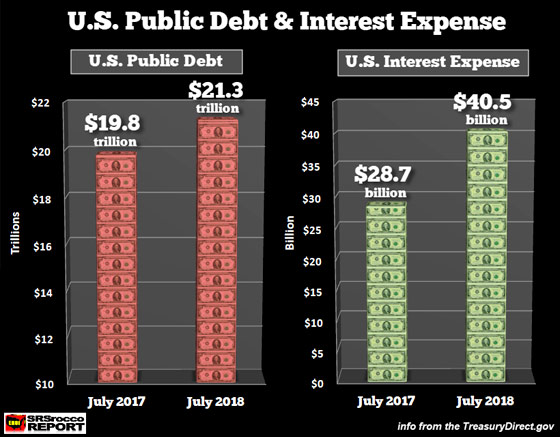 Total U.S. public debt shot up to $21.3 trillion in July versus $19.8 trillion during the same period last year. While the public debt increased 8% during this period, as I mentioned above, the interest expense surged by 41%. So, the rapidly rising cost to service the U.S. debt will become an ever-increasing burden for the accountants at the U.S. Treasury and Federal Reserve.

Now, the chart above only shows the U.S. public debt as of July 31st. Here is a table from the TreasuryDirect.gov website showing the increase in debt for August and a few days in September: 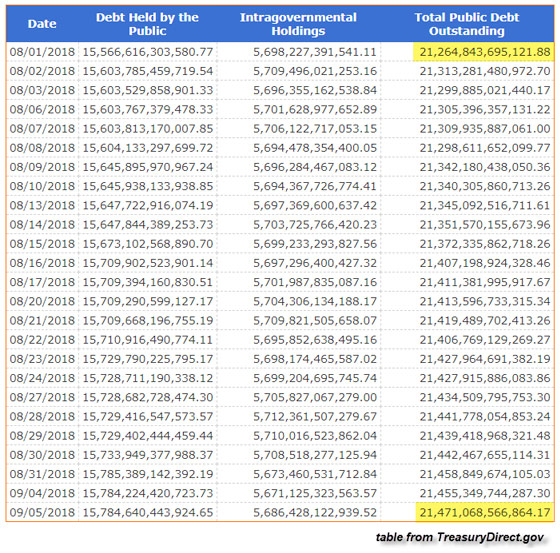 In just a little more than a month, Uncle Sam added another $200 billion to the public coffers. At that pace, it would be over $2 trillion a year… LOL. Unfortunately, we Americans have become numb to this sort of financial insanity. Thus, trying to be frugal or smart about spending money in a land of Spend-Thrifts and Credit-Card Junkies, makes one seem like a real oddball. I know, I am one of them.

While I can go out and buy a new car, I rather drive my old beat-up Ford pickup truck. When I drive down the highway during the weekend and see a family in a large $60,000 four-wheel drive pickup truck, pulling a $40,000 RV with a trailer behind it holding two ATV’s at $10,000 a pop, I wonder how many paid cash for that??? Of course, it’s likely a fraction. Everyone is up to their eyeballs with payment plans and debt.

After all… this is the American way.

So… the fun everyone is enjoying on borrowed money will likely go on a bit longer. Yes, it’s hard to predict when the music stops. But, when it does, there may only be 1 chair for every 50 Americans. As comedian George Carlin would say… “THIS IS WHEN THE REAL FUN BEGINS.”