Which Precious Metals Are Likely To Be Better Investments During The Next Market Crash?

The question on the minds of many investors, is which of the precious metals will be better investments during the next market crash? I should know because I receive this question in my email box quite often. So, I decided to test the price action of several metals and how each traded during a large market correction.

This article will focus on the top four precious metals, gold, silver, platinum, and palladium. Even though Rhodium and other metals are considered precious, the ones listed above take the lion’s share of the investment market. Furthermore, while platinum and palladium are purchased as investments, they have a much larger industrial component than gold or silver.

As I have mentioned many times, gold and silver disconnected from the broader markets when the Dow Jones Index fell 2,000 points in the first six weeks of 2016.

The two reasons I believe gold and silver jumped considerably as the markets sold off at the beginning of 2016 were:

To explain why investors were spooked in 2016, we need to look at the following chart: 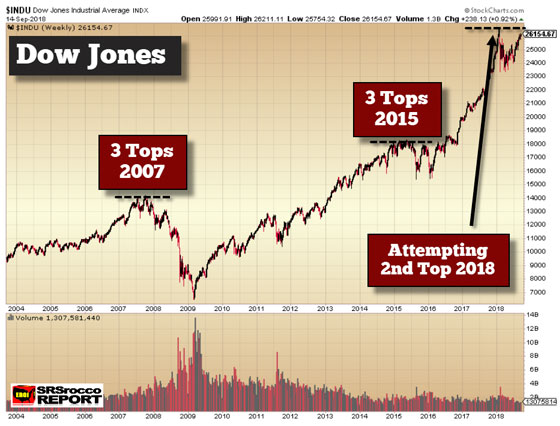 Typically during a major correction, the market makes several attempts at a top. In 2007, there were three tops made before the market finally came down in 2008. Then in 2015, we had three more tops and two large corrections. The reason investors’ worry turned into fear at the beginning of 2016 was that the last top did not reach the previous 18,000 level.

And this can be seen in the next chart: 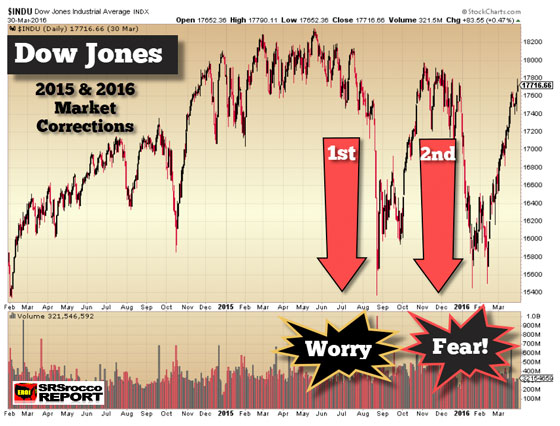 You will notice that from March to July 2016, the Dow Jones kept trading above the 18,000 level. But by August, the market rolled over and experienced the first significant correction. However, when the Dow Jones recovered in September and October, its peak did not surpass the 18,000 level. So, as the market suffered the second large correction, investors thought this was going to be the BIG ONE.

The next six charts show how five metals (gold, silver, copper, platinum & palladium) and the oil price reacted during the second correction Jan-Feb 2016: 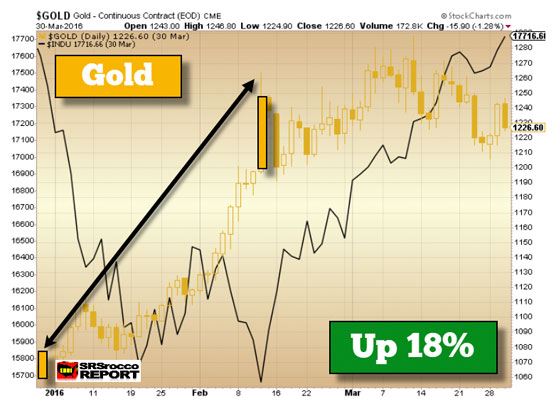 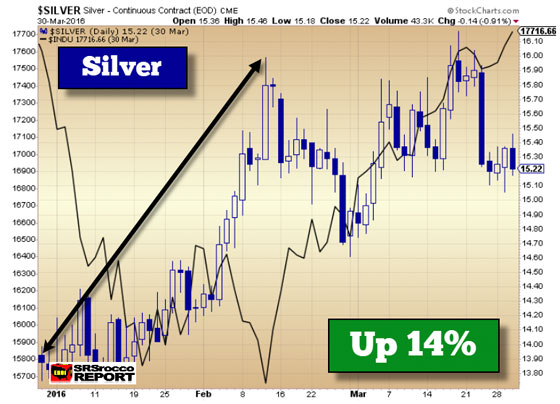 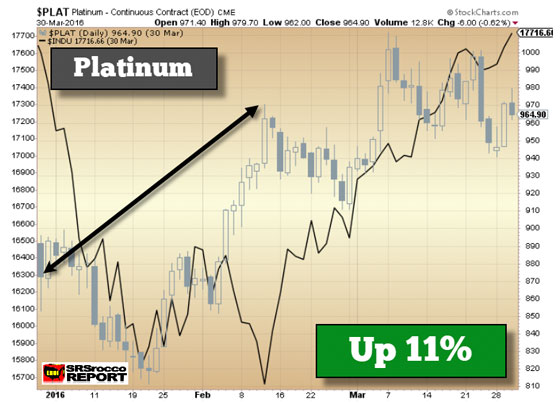 Now, these three precious metals enjoyed NET GAINS during the 2,000 point correction in the Dow Jones. The gold price increased the most by 18%, followed by silver at 14% and platinum at 11%. The Blackline in all the charts represents the Dow Jones Index. If we look at the next group of metals and oil, they all suffered losses: 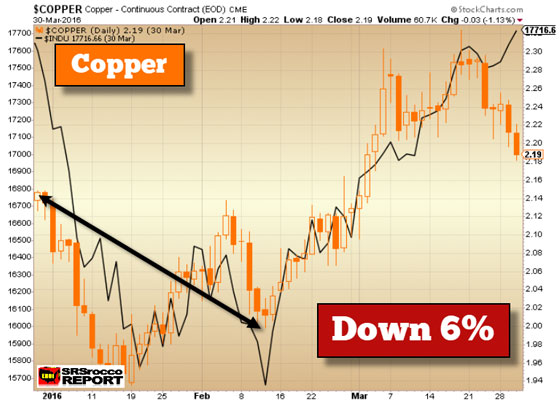 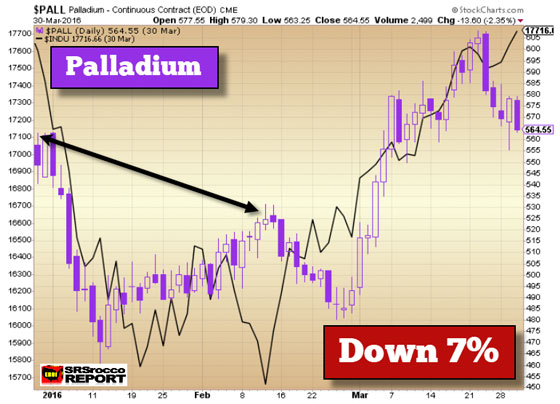 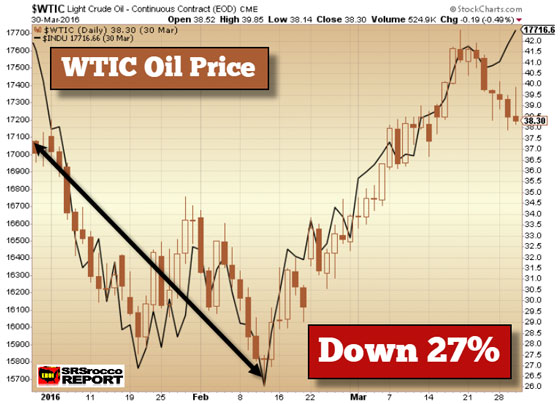 While all three price charts above experienced NET LOSSES, copper, and oil trended in parallel with the Dow Jones Index the most. Thus, copper, platinum, and oil were more deflationary during the market downturn than gold, silver or platinum. Moreover, you will notice that when oil and copper reversed, they mirrored the Dow Jones Index higher in Feb-March 2016.

If we reference this chart once again and the six below it, they will provide some clues as to which metals will be the better investments during the next market crash:

While most precious metals investors buy gold and silver based on fundamentals, the performance of the broader markets is based on technical analysis. Retail and professional investors make decisions due to the changing technicals in the market and economy. Currently, the Dow Jones Index is attempting to make a second top by reaching the previous peak of 26,600. Traders are watching this setup very carefully and if the Dow Jones Index surpasses that 26,600 level, it could shoot up even higher. This is due to “momentum trading.”

However, this present 9-year economic cycle is grinding higher with an ever-increasing amount of leverage and debt. So, at some point, this present market cycle will end… thus causing another violent crash.

To understand how the metals might perform during the next market downturn, the next set of charts show how each of the metals, and oil have traded since the beginning of 2016. Interestingly, the three that suffered losses during the 2016 market correction (copper, palladium & oil) have done remarkable well or at least in the case with copper, held up the best: 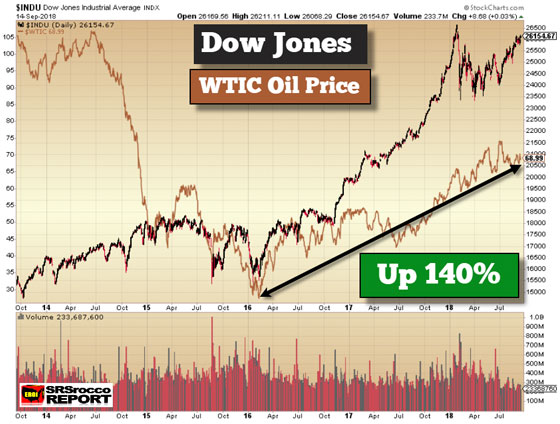 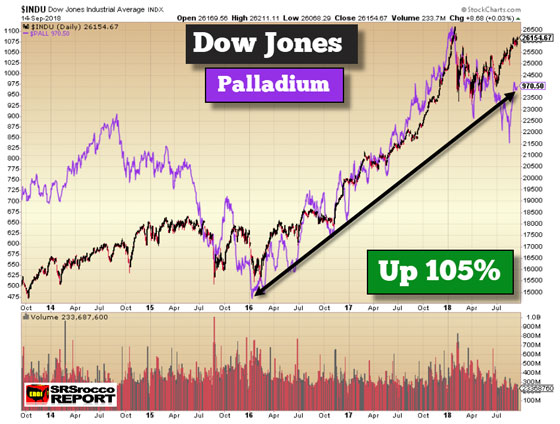 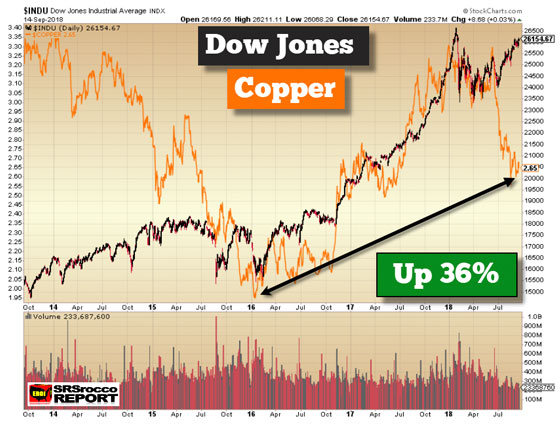 As we can see, the oil price is up 140% since January 2016 while Palladium is up 105% and copper, 36%. It is almost uncanny how palladium has moved up in parallel with the Dow Jones Index. Regardless, palladium, copper, and oil have outperformed the next group: 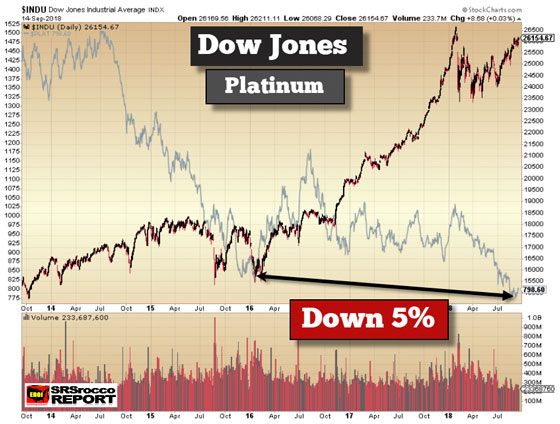 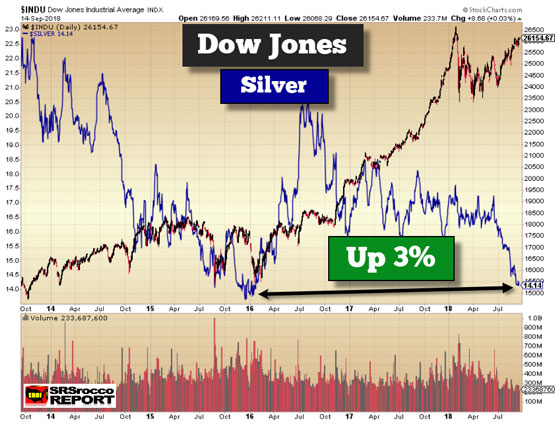 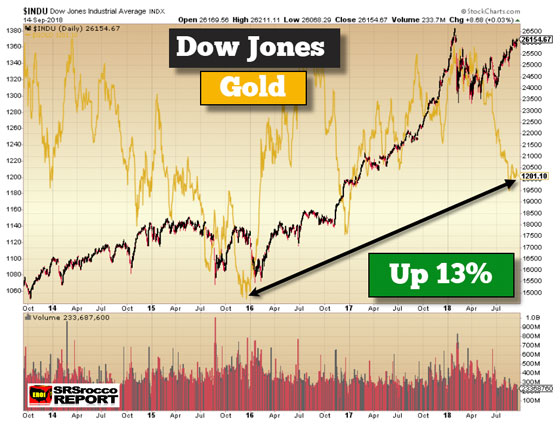 I was quite surprised to see platinum down a net 5% since the beginning of 2016. Furthermore, silver is only up a mere 3% and gold, 13%, during the same period. Of these three metals, the platinum and silver price trends look more identical than gold. That is because they have a much larger industrial component than gold.

So, now that we have seen all these charts, it seems to me that gold, silver, and platinum will likely outperform palladium, copper, and oil during the next market crash. In addition, the Commercials are now NET LONG in Gold, Silver, and Platinum (first time in 25 years). I don’t have all the Commercial hedgers charts, but I will show platinum and copper: 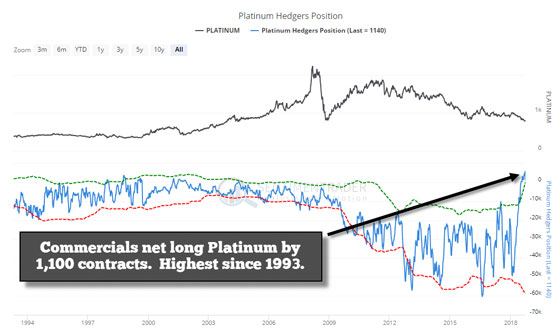 The Commercials are net long platinum by 1,000 contracts, the first time in over 25 years. However, if we look at the Copper Hedgers’ chart, there is still room for the copper price to fall: 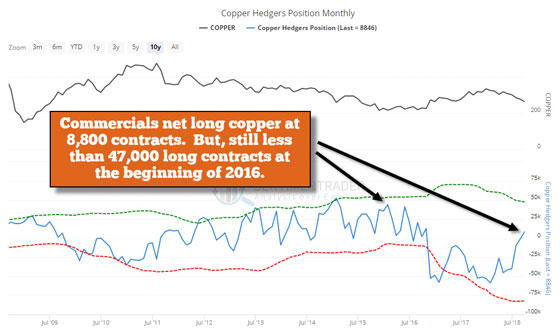 I must say, it’s quite interesting to see that silver and platinum severely underperformed, palladium, oil and to a lesser extent, copper. You would think that industrial metals would trade in unison, but this wasn’t the case over the past two and a half years.

So, in looking at the data, the market is setting up for a reply to the 2016 correction, but only worse. Both silver and platinum are now back at their lows, with gold not too far behind while the Dow Jones Index attempts to make another Blow-off top. When the markets finally roll over, I believe gold, silver, and platinum will likely be the best performing precious metals investments during this time.

Unfortunately, copper and oil will likely suffer declines during the market downturn as these are more subject to deflationary pressures being the king industrial commodities. However, palladium is most certainly the wild card here. On the one hand, palladium seems to be overbought, but on the other hand, it’s Commercial hedgers’ short positions are closer to their lows.

Also, the majority of the platinum and palladium supply is used as autocatalysts in the automobile industry. More importantly, a great deal more palladium is used than platinum by the auto industry. For example, according to the 2018 GFMS Platinum Group Survey, forecasted autocatalyst demand this year will be over 8 million oz of palladium compared to only 3.3 million oz of platinum. Therefore, palladium is more at risk than platinum during a downturn in the automobile industry.

Moreover, GFMS forecasts nearly six times more platinum investment (292,000 oz) than palladium (59,000 oz) this year. And if we consider that 93% of palladium is consumed by industrial uses (minus jewelry and investment) versus 70% for platinum, palladium is more at risk during a severe economic downturn.