The Federal Reserve’s Rising Interest Rates Are A Ticking Time-bomb For U.S. Economy

One of the worst things for an over-heated and extremely leveraged economy is rising interest rates. So, with the recent 2-2.25% interest rate, big trouble is on the horizon, Also, with higher interest rates, the U.S. Treasury will have to fork out even more money to service its debt. In just a little more than two years, the U.S. Fed Funds Rate jumped by nearly 2%.

This is indeed a big change for the Federal Reserve’s “economic stimulation policy” as it kept interest rates below 0.25% since January 2009. And with extremely low-interest rates, nearly zero, it allowed the United States to more than double domestic oil production. Unfortunately, this newly created oil supply has come at a huge cost. It has created another big mess which I call the U.S. Shale Ponzi Scheme.

But, before I get into details of this article, I wanted to let my readers and followers know that the lack of articles this week was due to a freak storm that impacted our area. We had a mini-tornado or a micro-burst that touched down in our local area which caused a great deal of destruction, mostly to trees and bushes. In a little more than 10 minutes, upwards of 100 mile per hour winds uprooted, snapped and destroyed a large number of trees on our property.

Interestingly, there was only minor damage done to one home in the adjacent neighborhood. The homeowner’s wooden porch and garage tin roof were ripped off, and part of the roof is still hanging 30 feet up in one of our trees. So, I have been quite busy not only cleaning up the mess on my property, but also helping my neighbor. I will say, the good thing that came out of all this destruction is how our neighbors came out together to help out.

So, I apologize for the lack of articles this week. But, I will be posting several articles next week on the interesting changes taking place in the economy and financial system.

Okay, getting back to rising interest rates. The Federal Funds Rate is now 2-2.25%. As we can see in the chart below, it is the highest it has been in nearly a decade: 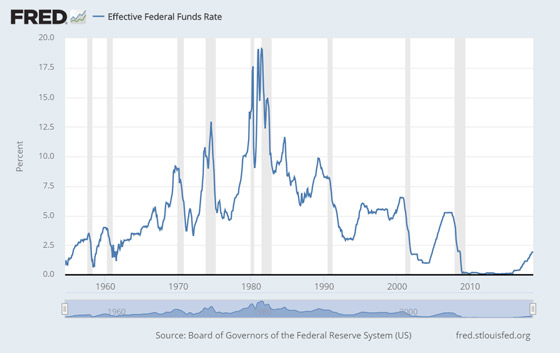 Furthermore, each time the Fed hiked interest rates, a recession (shown in the shaded areas) was the result. When the Fed increased the Funds Rate from 1% in May 2005 to over 5% by 2007, it assisted in the crashing of the mighty U.S. housing bubble and precipitated the investment banking meltdown in 2008.

Now, the Fed also plans to increase rates to 2.5% in December. So, this should start putting a great deal of pressure on the U.S. economy over the next few years. Furthermore, the debt service the U.S. Treasury has to pay also increases as rates rise. For example, the interest expense the U.S. Treasury paid to service the public debt for 2018 jumped to $523 billion, up from $458 billion last year. Thus, the interest expense increased by a whopping $65 billion (14%), in just one year: 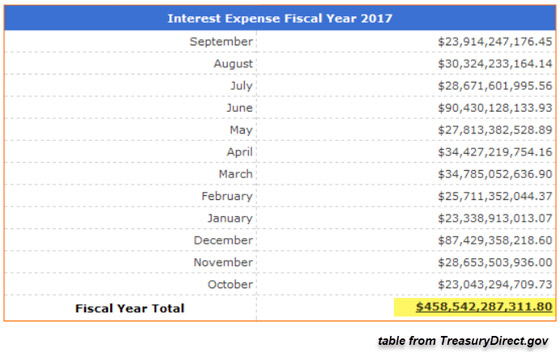 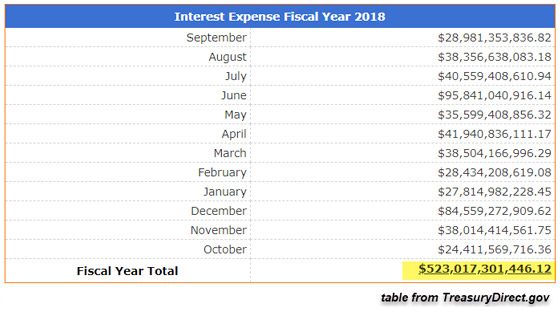 As I have mentioned several times in previous articles, what happens when interest rates double to 5%, as they were in 2007? It means that the U.S. Treasury will have to pay $1.08 trillion just to service its debt. However, I don’t believe the Fed Funds Rate will get to 5% before the stock market cracks and the economy heads into another recession. Even if the Fed continues to raise rates, possibly to 3%, it will have to lower them once again when the overheated economy starts to cool down.

Unfortunately, the next U.S. recession (possibly depression) will destroy the U.S. Shale Energy Industry. This is undoubtedly bad news because without the additional 5.5 million barrels per day of U.S. shale oil this past decade; I don’t believe the U.S. economy could have been pulled out of the 2008-2009 recession. We need to realize it takes real physical energy to drive economies. While money printing and the addition of debt can prop up the economy, it can’t be done without the energy.