As The Markets Sell-off The Precious Metals Rebound

To the surprise of many investors, the precious metals have rallied while the broader markets continue to sell-off. Currently, both gold and silver are solidly in the green while the major indexes were all the red following a huge sell-off yesterday. The Dow Jones Index has lost nearly 1,000 points in the past two days while the gold price is up nearly $25.

However, even though we could see a late-day rally in the markets, and even higher stock indexes over the next few months, the bear market for stocks is still coming. The Dow Jones Index has now suffered two large sell-offs in the past ten months: 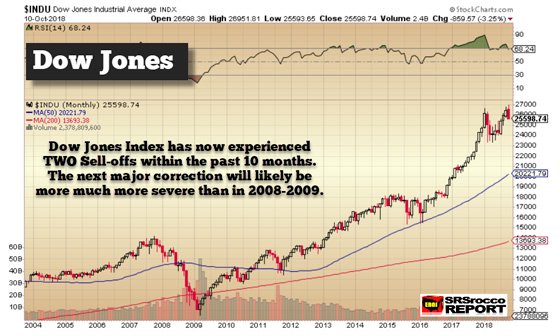 In January, the Dow Jones Index fell by more 3,000 points, and the current correction is only one-half of that amount. So, I expect to see a continued correction over the next month. Because October is the worst month for market Crashes, this could be one hell of a blow for not only the economy but also, for investor confidence.

For example, according to the Zerohedge article, Used-Car Prices Plunge Most In 15 Years: 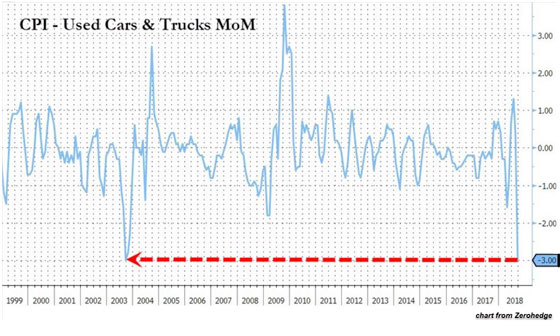 Looking deeper at the core inflation print, it reflected a 3% monthly drop in prices for used cars and trucks following increases in each of the last 3 months, and the biggest drop in 15 years…

And then, of course, the continued disintegration of the U.S. Retail Market, Sears Creditors Push For Bankruptcy Liquidation As Vendors No Longer Paid:

Amid recent reports that Sears is set to file for bankruptcy as soon as this weekend ahead of a $134 million debt payment due on Monday, the only question is whether the filing will be a Chapter 11 debt for equity reorganization or a Chapter 7 liquidation. And contrary to the desires of Sears CEO and biggest creditor, Eddie Lampert, who would like to preserve the core business, others are pushing for an outright liquidation. 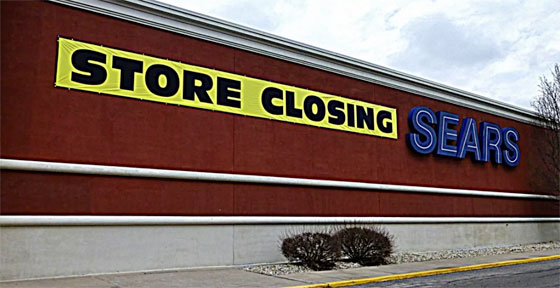 According to the WSJ, a group of Sears’ biggest lenders, including Bank of America Corp., Wells Fargo & Co. and Citigroup Inc., are pushing for the company to liquidate its assets under a chapter 7 bankruptcy filing, as opposed to reorganizing the business under chapter 11, this person said.

Interestingly, Sear’s major lending institutions (Blank of American, Wells Far-gone & CitiCorpse) are pushing for a complete bankruptcy liquidation rather than a reorganization. I gather they believe the “brick and mortar” retail industry is likely heading for the dustbin as the Amazon’s of the world takeover. I can assure you that “Amazon Economy” won’t last for much longer especially when the U.S. economy and shale oil industry collapse.

As I mentioned in several articles and videos, the precious metals will likely RALLY during the major market correction. And we are seeing evidence of that today. Gold is up over $20 and Silver, $0.23: 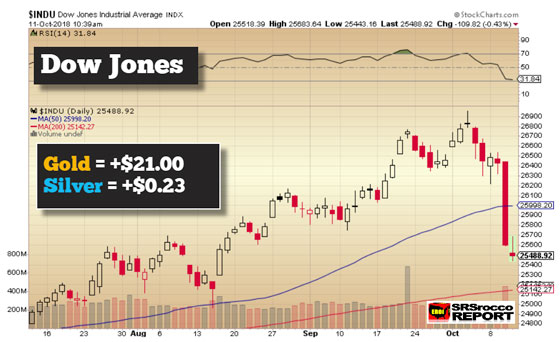 When I did this chart, the Dow Jones Index was only down 100 points but is now down more than 200. So, why aren’t the precious metals selling off with the broader markets as they did in 2008? The reason for the rally in gold and silver is because the precious metals have continued to trend lower over the past six years while the broader markets climbed higher. Thus, they have already “SOLD-OFF.”

Now, I am not saying that gold and silver can’t spike lower, but according to market sentiment and the COT Report, the precious metals are closer to a LOW while the broader markets are still trader near their HIGHS… even with the last two-day correction.

Due to the fact that investors trade based on technical analysis, the 10-year U.S. Treasury just hit a KEY LEVEL: 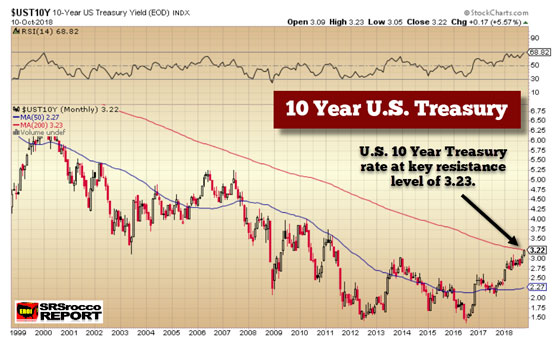 As we can see, the 10-Year U.S. Treasury rate has hit up against its 200 Month Moving Average (MMA, in RED). Typically, it will bounce off this and head lower, but if it doesn’t, then it could spike even higher. We must remember, higher interest rates aren’t good for the U.S. Government’s ability to service its debt.

In my previous article I posted the 2018 fiscal interest expense for the U.S. Government debt: 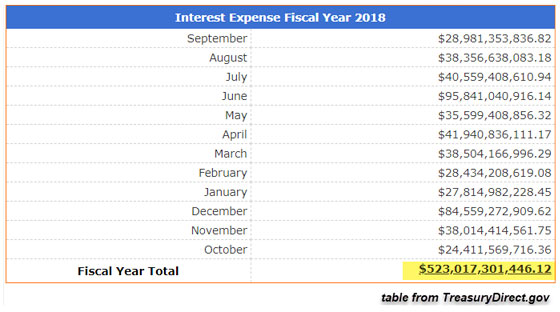 So, as we can see, the fundamentals for the U.S. economy and market are in serious trouble. I imagine President Trump, the Fed Chairman, and U.S. Treasury Secretary will do all in their power to keep the markets from imploding, but eventually, the fundamentals kick in. And when they do… they will do so in a BIG WAY.

Lastly, while the gold and silver miners are still wholly out-of-favor with most investors, don’t be surprised to see serious gains over the next several years as the broader markets head into the toilet. I know this sounds counter-intuitive, but there just won’t be much for investors to protect wealth during the next major downturn.

For example, First Majestic Silver is now coming off its lows of $5.00: 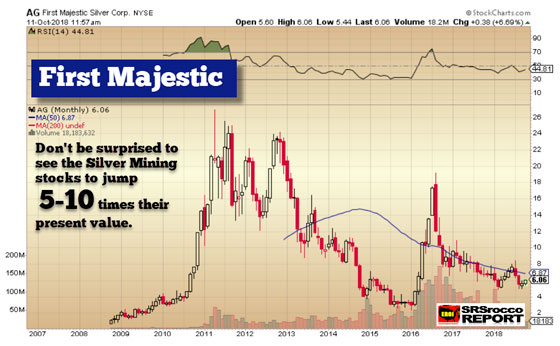 While First Majestic reached a high of $25 in 2011, I wouldn’t be surprised to see it at least five times higher during the next bull market.

IMPORTANT NOTE: I just picked First Majestic as an example of the primary silver miners market. So, do not trade or make any investment decision based on this information. Do you own due diligence before making and investment decisions.

However, common sense tells us that the past ten years of propping up the markets with more paper money and debt will not bode well for most stocks, bonds, and real estate. Gold and silver have been stores of wealth for thousands of years even though the typical investor has been hoodwinked by Wall Street and the Central Bankers.